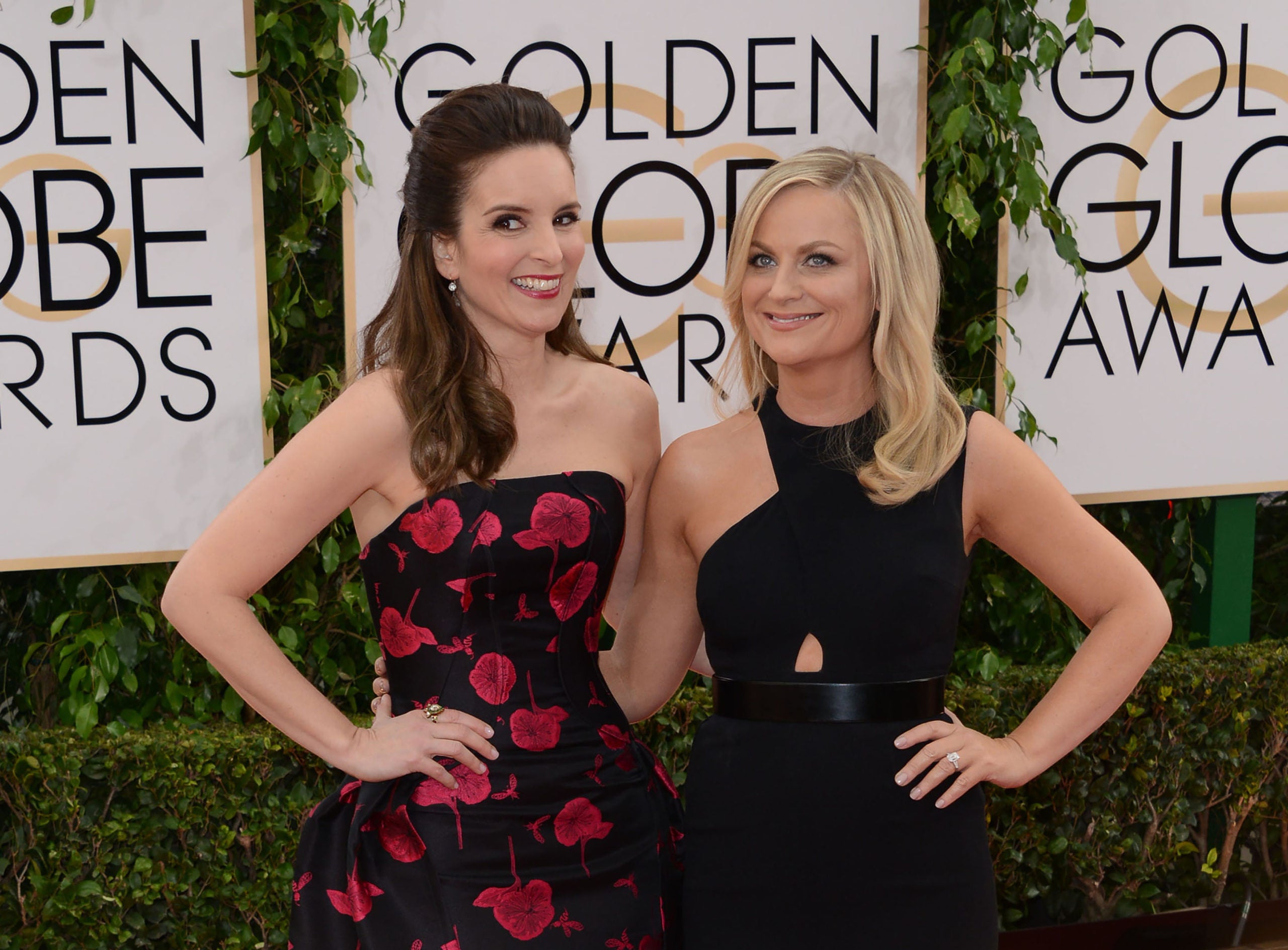 This January 12, 2014 photo shows actress Tina Fey (L) and Amy Poehler (R) arriving for the 71st Golden Globe Awards held at the Beverly Hilton hotel in Beverly Hills. The unveiling of the Golden Globes nominations on February 3, 2021 will jumpstart a Hollywood awards season like no other, with pandemic-related theater closures and blockbuster delays expected to boost smaller, stay-at-home movies like Netflix’s “The Trial of the Chicago 7” and “Mank.” Photo by Chris DELMAS / AFP

LOS ANGELES — The unveiling of the Golden Globes nominations on Wednesday will jumpstart a Hollywood awards season like no other, with pandemic-related theater closures and blockbuster delays expected to boost smaller, stay-at-home movies like Netflix’s “The Trial of the Chicago 7” and “Mank.”

The influential Globes are often a bellwether for any given film’s success at the Oscars, but all bets are off in a year that has seen glitzy award campaign events scrapped and ceremonies postponed by Covid-19 restrictions.

Tinseltown’s traditional studios held back the release of several big hitters last year in the hope of theaters reopening, so streamers including Netflix, Amazon Prime and Apple should fare better than ever at upcoming prize ceremonies.

Among the lead contenders are Aaron Sorkin’s “Chicago 7” — a timely look at the protests, police violence and madcap trial surrounding the 1968 Chicago anti-war riots — and David Fincher’s “Mank,” which dives into Golden Age Hollywood with the making of “Citizen Kane.”

Amazon Prime has “One Night in Miami,” a play adaptation about Muhammad Ali, Malcolm X, Sam Cooke and Jim Brown’s friendship at the height of the US civil rights movement, and sleeper hit “Sound of Metal” about a rock drummer who loses his hearing.

Holding the line for Hollywood’s old-school studios almost singlehandedly is “Nomadland,” which swept the prizes at the Venice and Toronto festivals and is the pick of many experts for overall best picture.

The movie from Disney-owned Searchlight stars Frances McDormand adrift among a community of elderly, nomadic idealists who roam across America in worn-out vans.

“Most of the contenders seem to be more intimate movies, or ones that do play well at home,” said Chris Beachum of awards tracker Gold Derby.

“A lot of the ‘big-screen’ type movies — thinking about a James Bond movie or the Marvel movies — have been held back anyway. They’re not even competing for this year’s races.”

Voted on by the 90-odd members of the Hollywood Foreign Press Association, the Globes split movies into “drama” and “comedy or musical” categories.

“Hamilton,” created from multiple performances featuring the original cast including creator Lin-Manuel Miranda, is not allowed to compete at the Oscars, meaning the Globes represent the best chance for the Tony-winning musical about the US founding fathers to scoop up film accolades.

Foreign-language films are likewise separated out into their own Globes pool, where Korean-American family drama “Minari” is tipped to emulate last year’s all-conquering “Parasite.”

Other heavyweight lead actor favorites include Anthony Hopkins for “The Father,” adapted from a French play about dementia, and Gary Oldman for “Mank.”

“And you’ve got a favorite of the Globes people, Tom Hanks (for “News of the World”) — I mean, it’s a really strong category,” said Beachum.

Boseman’s “Ma Rainey” co-star Viola Davis is expected to feature on the best actress side, along with Carey Mulligan for #MeToo revenge thriller “Promising Young Woman,” and McDormand.

Last year, the HFPA was slammed for its failure to nominate any female directors, but Chloe Zhao (“Nomadland”) and Regina King (“One Night in Miami”) appear well-placed this year.

The 78th Golden Globes ceremony will take place on February 28 — almost two months later than usual, yet still a week before nominations voting for the Oscars even begins.

Tina Fey and Amy Poehler will host the ceremony, broadcast from its usual Beverly Hills hotel venue, but presumably without the event’s trademark raucous A-lister crowd and party atmosphere.

The Globes also include a plethora of television awards, tending to mimic the small screen’s showpiece Emmys, which took place in September.

Jane Fonda will receive a career achievement award, as will Norman Lear for his work on the television side.

The Oscars follow some two months later, on April 25.