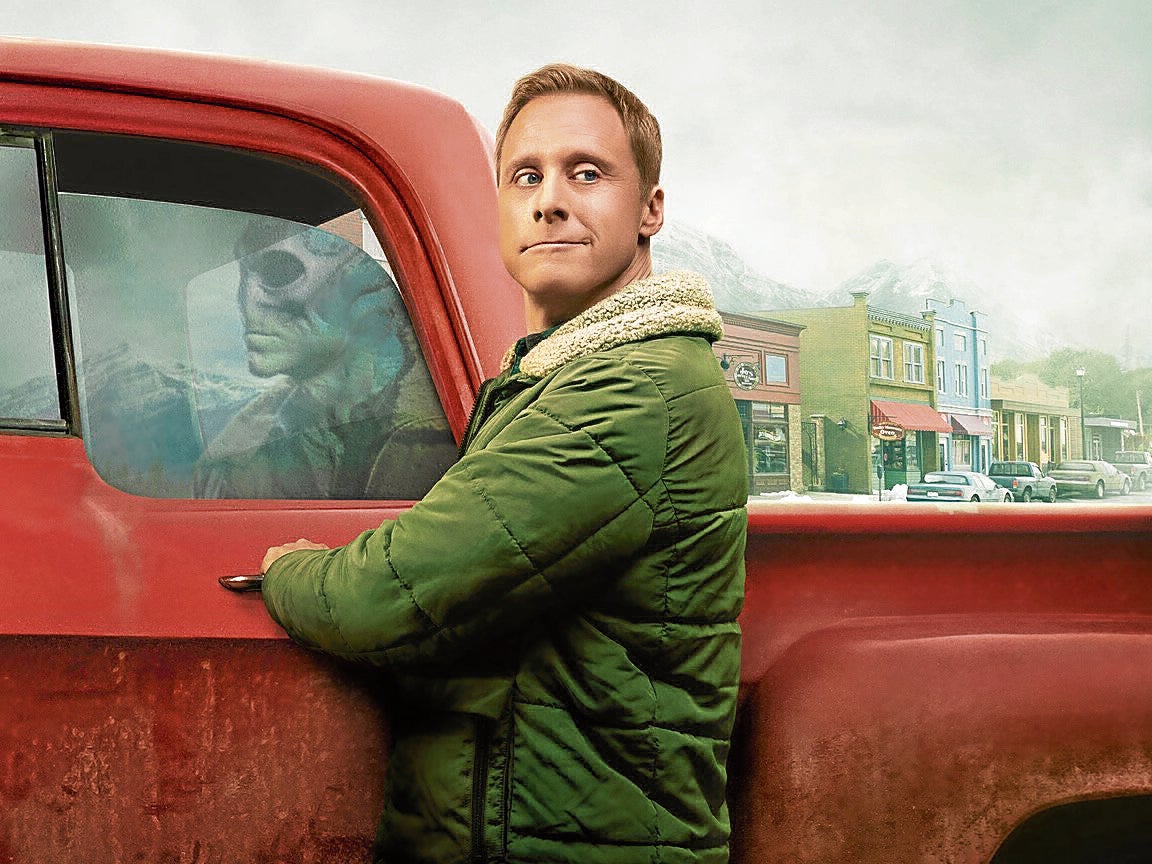 If we were to get stranded during a virus-instigated lockdown, we’d much rather get holed up in a place like Patience, Colorado. It’s a quaint but visually breathtaking fictional tiny town in the middle of nowhere—the perfect setting to play out the story of an alien after his spaceship crash-lands on Earth, following an as-yet-unaccomplished mission to blow pesky humans to smithereens.

The show, which is produced by Steven Spielberg’s Amblin Entertainment and premieres at 10:40 p.m. on Fox today, sees the alien take on the identity of Dr. Harry Vanderspeigle in his awkward attempt to fit in and avoid scrutiny while he tries to complete his task. But the longer he interacts with the inferior humans, he realizes he’s becoming—gasp—more and more like them!

Alan is best remembered for his role in the 2002 cult TV series “Firefly” (as Wash) and its 2005 big-screen iteration “Serenity.” And while the 49-year-old actor’s name may not immediately ring a bell, we’re pretty sure you’ve seen him play supporting characters in such films as “Rogue One: A Star Wars Story,” “Deadpool 2,” “Maze Runner: The Scorch Trials,” “Transformers: Dark of the Moon” and “I, Robot.”

Alan’s body of work as a voice actor in animated films and series is even more formidable, boasting roles in high-profile projects like “Wreck-It-Ralph,” “Frozen,” “Ice Age,” “Big Hero 6,” “Justice League: War,” “Son of Batman,” “Alvin and the Chipmunks” and “Moana.” Whew.

But as they say, good things come to those who wait—and Alan’s foray as the lead star of his own TV series couldn’t have come at a more appropriate time, when viewers appreciate being temporarily whisked off their daily woes and heavy burdens brought about by the global health crisis.

Alan’s big break came with character-shaping lessons he learned as a young boy in Plano, Texas, trying to fit in and dreaming of becoming an actor, Alan told us on this Zoom chat after we asked him what it was like “wanting to belong.”

“Ha! We’ve all been there, haven’t we?” Alan quipped, laughing. “It started early for me, as I was growing up in Texas—and I think that’s what will appeal to viewers of ‘Resident Alien.’ For Harry, it isn’t just about fitting in, but also trying to pass himself off as human. People are so wrapped up in their own problems that they don’t notice how odd this guy behaves and that he could be a full-blown alien.

“For me, that ‘fitting in’ time was middle school in the ‘80s, right before I discovered skateboarding. There are pictures of me with my hair sticking up like this (demonstrates) and my bangs coming down like that. I never put on black fingernail polish—it never got that far—but I was definitely trying all sorts of ways to make it through that period.

“In those days, the idea of acting wasn’t as legitimate a pursuit as it is now. These days, young people have an opportunity to get into the business from their homes, because of the internet. With just a phone [as a tool], you can become an influencer! I wanted to become an actor growing up in Plano. The journey to that wasn’t very clear, but from there, it’s been truly exciting!”

Asked what sets “Resident Alien” apart from other sci-fi shows, Alan pointed out, “The thing that instantly resonates with me about the series is the humor in it. There are sci-fi shows that have gotten this right, and the Marvel Universe films do it wonderfully, as did ‘Firefly.’ I was sold on Joss Whedon’s humor the moment I read about those dinosaurs fighting in outer space!

“As an actor, I learned to eat fake glass (laughs) because, in the beginning, Harry had to learn what he could and couldn’t eat. Seriously, it’s fun going through a process where you know you’re tricking yourself to play a character who’s feeling things for the first time, mulling over feelings of love and loss—which all get covered in the first season. Going through that can be a moving or touching experience. It was nice to rediscover those moments.”

With his stint on “Resident Alien,” Alan is getting his rare shot at solo stardom at age 49, so his recollection about how he became an actor really took our breath away.

“I was going to be a hotel manager and attend the University of Houston, which has a great program for that. I was serious about it until my public high school speech teacher heard about this.

“She said, ‘I thought you were going to do acting? And I answered, ‘No, no, no. I’m not good enough to make it as an actor. All the other kids in our drama program are better than me,’ and she said, ‘Let’s take a walk.’

“No offense to my friends from that class, who I still get in touch with, but my teacher said to me, ‘You’re better than they are—and you can make it!’ In fact, it was just the support and affirmation that I needed to pursue acting. Armed with conviction, I became a theater major and decided I wasn’t going to stop until I got a real shot at this. And I guess that’s what brought me here with you.”

Yes, Mr. DeMille, Alan Tudyk, at 49, is finally ready for his closeup. 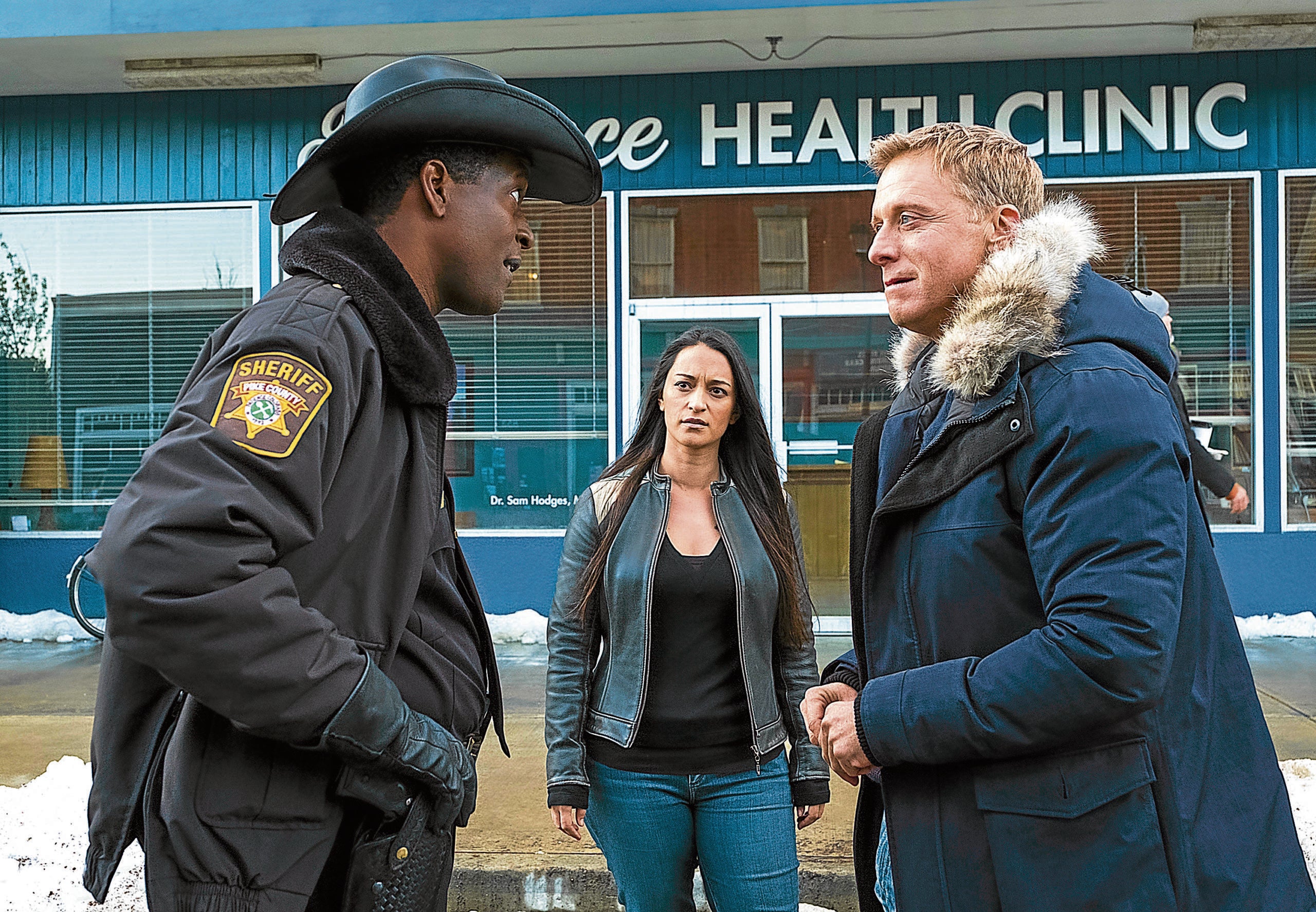 Our Q&A with the actor:

How did you prepare for this unusual character?

Luckily, I’ve had a couple of opportunities to play robots, like Sonny in “I-Robot” and K-2SO in “Rogue One.” I learned the right approach and physicality of it all. Harry wasn’t supposed to develop feelings, so when he eventually does, it becomes confusing for him. I was waking up some old muscles that I built up way back when.

Oddly, Harry has turned out to be pretty sympathetic.

Oh, that’s a very nice thing to say … because he does want to kill the human race (laughs)! It’s a tough trick to pull off—and one of the challenges that made this role exciting to tackle.

“Firefly” has a lot of followers. But you’ve been doing science fiction for a long time now. Sci-fi used to be just for nerds and geeks, but now it’s mainstream. What are your thoughts about the evolution of sci-fi and how this has changed those conventions?

It’s fantastic! There’s hardly any downside to the evolution of sci-fi, especially given the mainstream success of Marvel’s superhero movies. It’s become, like, a badge of legitimacy. The only downside to that is, sci-fi conventions have become more corporate—and that’s a shame. They kind of pushed out the little guys.

How is the show relevant to our pandemic-stricken world these days?

Well, our world has an alien invader that seems bent on destroying humankind, right (laughs)? So, there are parallels there. There’s also the need to come together and care for one another—which seems to be the answer. Like Harry, the more we’re in touch with our humanity, the better off we are, and the more likely it’ll be for us to prevent an “Extinction Level Event.”

As a way to show respect for one another, we need to wear masks and not be selfish. It’s an important message that has been hijacked and highly politicized—and I think that’s criminal, because a lot of people have already died because of the virus.

It has also affected the show. We had to stop filming, with two weeks left to shoot and everybody went away. I stayed in Vancouver, with my wife, who’s Canadian. We didn’t go back to Los Angeles and ended up falling in love with this glorious city. So, we moved here—and that’s a positive. I’m still American but living in Vancouver.

You’re very successful as a voice actor. How different is the fulfillment you get from acting compared to voice work?

Voice-over acting is a lot of fun! A lot of it requires the use of your imagination, especially when you’re creating a character. The script is always being worked on all the way up until the very end. It is a very pure form of creation and play.

On the other hand, acting in front of a camera is a lot harder and takes more time—and I prefer it because of that. Of course you’re luckier if you can do both at the same time!

Health dep’t firm on AstraZeneca use despite OCTA caution