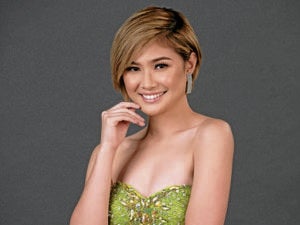 Thea Tolentino’s role in “The Lost Recipe” is a welcome departure from what she usually gets. For a change, she jested: “Hindi ako mang-aagaw ng lalaki dito!”

“The approach is different here. It’s not about shouting matches or the catfights. The focus is to show that the characters are all emotionally connected,” said the actress, who plays a chef named Ginger Romano in the new romance-fantasy series produced by GMA Public Affairs and airs on GMA News TV.

Thea admitted that she actually had a more difficult time doing light scenes, because almost all the projects she has done in the past couple of years have been drama.

“It’s actually a challenge for me, because since 2013, the projects I have had were heavy. Yes we have heavy scenes here, but the show is on the lighter side. And actually, I had a tougher time when not doing heavy drama, because I’m used to acting angry most of the time,” she related in a virtual conference. “So I’m working on being more calm and restrained.”

But while she has been typecast as a kontrabida, Thea doesn’t think of it negatively. “At first, they tried to put me in good roles, but I think that didn’t work out. They felt I suited strong roles better. But that’s not a disadvantage because I have learned a lot from those experiences,” said Thea, who played such roles in “The Half-Sisters,” “Asawa Ko, Karibal Ko” and “Madrasta.”

“And since I have been doing it for years, I have learned how to make each portrayal different. The consistent projects shape me into who I am; that helped me. I wasn’t as confident before, and now I believe in my skills,” the 24-year-old actress and winner of the talent search “Protégé” Season 2 added.

During the peak of quarantine, when production was at a standstill, Thea busied herself watching movies and shows for some inspiration. “Whenever I chance upon good shows, I get inspired to work again, learn again and try what I have seen,” related Thea. “Nakakabaliw hindi mag-taping for months, so I’m excited to be back.”

Read Next
Crazy Jhenny, January 28, 2021
EDITORS' PICK
Every Filipino home can now be a smart home with realme TechLife
PLDT Home Prepaid WiFi customers now under the care of Smart
Nestlé Philippines’ ‘NESCAFÉ Plan’ bags Grand Anvil at PRSP 56th Anvil Awards
Wesley So officially a US citizen
‘Pilgrim of peace’ Pope Francis heads to war-scarred Iraq
WHO: Arrival of vaccines in PH ‘a powerful step’ towards economic recovery, normalcy
MOST READ
Kris Aquino dispels rumors on son Josh getting married, thanks Ogie Diaz for defending him
LTO’s P500-M deal for screws draws scrutiny
Wesley So officially a US citizen
Ginebra trades Slaughter to NorthPort for Standhardinger
Don't miss out on the latest news and information.