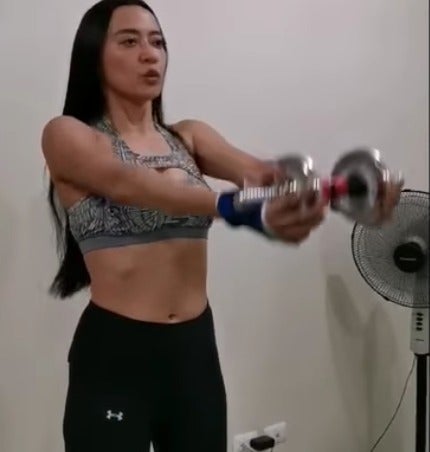 MANILA, Philippines — In an attempt to put pregnancy rumors about her to rest, Overseas Workers Welfare Administration (Owwa) deputy administrator Mocha Uson on Friday showed off her flat belly while working out, as she dismissed news of her being linked to Robin Padilla.

(I am pregnant with Robin’s child? There’s no truth to that news. The man is a good person.)

Uson also said the news was embarrassing for Padilla and his wife Mariel Rodriguez, adding: “Sigurado ako ang nagpapakalat niyan ay ‘yung mga bitter sa ating gobyerno (I am very sure that those who started the rumor are those bitter against the government).”

(We’re the target of gossip because everyone knows that Sir Robin and I are staunch supporters of President Duterte. The rumors only started because their bet Robredo flunked in the surveys.)

Rumor has it that the former singer-dancer and the action star are expecting a child, as Philippine Entertainment Portal (PEP) published a blind item titled “Controversial female personality, nabuntis ng sikat na aktor?” – which netizens later circulated on social media. Soon enough, speculations flourished that the blind item was referring to Uson and Padilla.