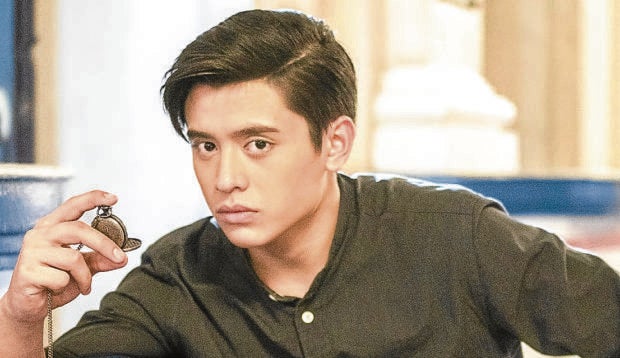 For his looks and demeanor, the rising young actor Kelvin Miranda has drawn comparisons to stars like Alden Richards, James Reid and Daniel Padilla.

But while being mentioned in the same breath as those established actors can be heartening to hear, Kelvin admitted that it also makes him nervous.

“Of course, it makes me happy that I’m being compared to talented and famous actors. That’s good. But it’s also hard because there will be expectations,” the 22-year-old talent said in a recent video conference for GMA Public Affairs’ “The Lost Recipe,” first locally produced primetime series on GMA News TV.

“When you say Alden … that’s on another level, so there’s pressure,” pointed out Kelvin, who captured viewers’ attention with his performance in the first Filipino Netflix Original film, “Dead Kids.”

Kelvin, who has also appeared in past GMA 7 shows such as “Kambal, Karibal,” “Madrasta” and “Contessa,” is determined to prove his mettle as an actor, so that he can eventually make his own name in the industry.

“I’m just starting out. I’m trying to strengthen my foundation on which I can build my own career. I will not give up. I will work hard so I can meet the expectations of people around and the people who support me,” he said. “I have to make myself distinct, so I don’t have to be in others’ shadows.”

Kelvin did read comments about him on social media when it was officially announced that he was starring in “Recipe.” While most of them are positive, some were not so good. But that’s to be expected in show biz, he pointed out.

“That can’t be helped. I’m just glad that they get to also voice out their opinions. Good or bad, you have to take them. I think I have gotten used to those kinds of feedback,” he said, adding that criticisms can also be helpful.

“I just channel them into something positive,” the Kapuso talent stressed. “I try to understand and use them as stepping stones to improve myself or build my path.”

Kelvin has a tendency to “overthink” and question his worth as an actor. But landing his first leading role in a drama series was reassuring. “This is the first time to get an opportunity this big. So I’m thankful for the trust,” he said. “People at GMA Public Affairs tell me not to worry because I deserve it.”

Airing weeknights beginning Jan. 18, “The Lost Recipe” is a mix of romance, comedy and fantasy, and will highlight Filipinos’ love for food. Kelvin plays Harvey, a failed chef who finds himself traveling back in time to steal a famous recipe and make it his own.

As he pursues his dream of putting up a culinary empire for his family, he meets Apple (Mikee Quintos), an aspiring chef who works in his company. “He’s a dreamer who will do anything to realize his goals and his family’s goals,” he said of his character. “I had to make some adjustments on my first shooting day because it hadn’t sunk in yet.”

The series is set mainly in Manila and will feature some of the city’s scenic spots and historical sites, with the help of the Department of Tourism- Culture and Arts of Manila and the Intramuros Administration.

As a foodie, Kelvin said playing Harvey is right up his lane. “I do cook every so often. My favorite is adobo and I try to put my own twist to it. And I just really love food … especially when I’m stressed. I love eating. If it didn’t make us gain weight, I would be eating every minute,” he jested.

If he were to describe Mikee, his leading lady, and compare her to a dish, it would be chop suey. “It has a lot of different flavors and a lot to offer,” he said. “As I worked with her more, I saw how much she loves her craft. She’s very lovable.”

As preparation, Kelvin underwent solo and group workshops. “We had to build on how my character gets mad, how he feels—technical stuff. The point is to help me make the audience feel the emotions Harvey carries inside,” he related.

Kelvin’s resolution for 2021 is to remain focused on acting, because, admittedly, he can get easily distracted. “It’s a challenge … I have to really put in the effort. You have no other enemy or ally but yourself. And this is not just for 2021 because I believe that there will be bigger responsibilities coming my way,” he said. INQ