To bend or to break | Inquirer Entertainment
Close
menu
search

To bend or to break 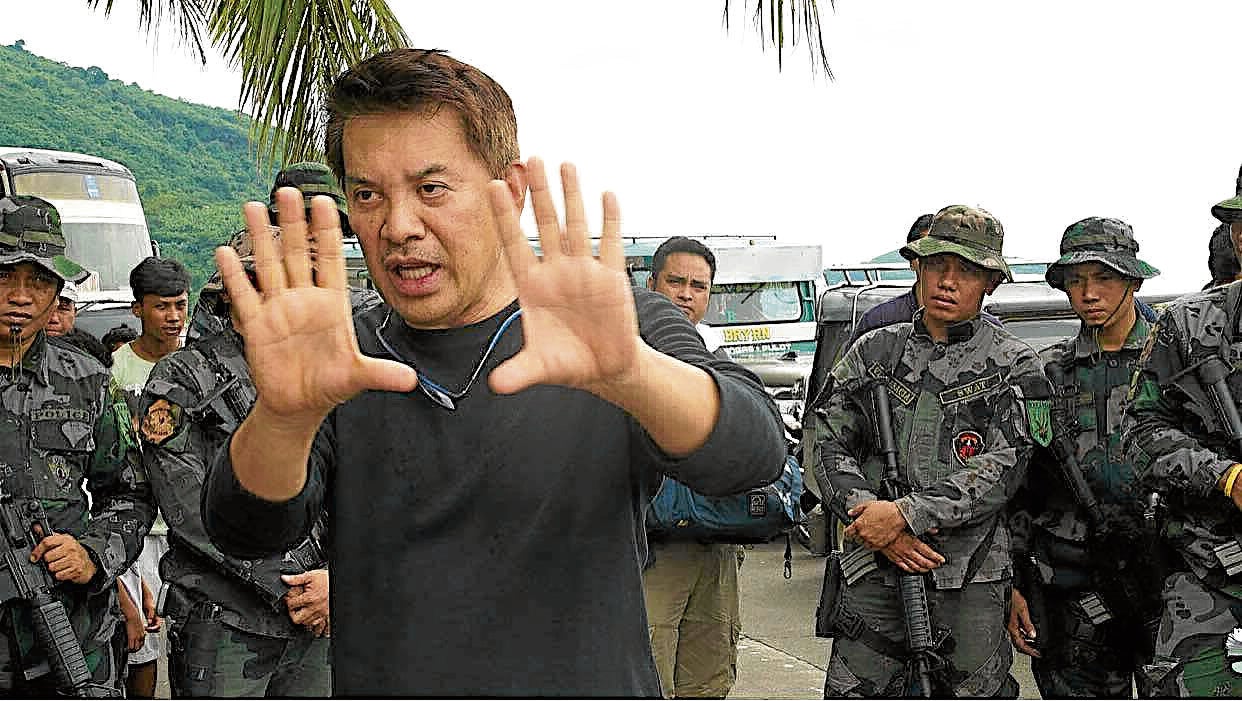 (Editor’s note: Inquirer Entertainment is thrilled to welcome Filipino auteur Brillante Ma Mendoza to its roster of writers. He is the county’s first and only winner of the coveted best director prize at the prestigious Cannes film fest, for 2009’s “Kinatay.” He also helped steer Jaclyn Jose’s best actress win, another first for the Philippines, this time for 2016’s “Ma’ Rosa.”)

If anything, the pandemic has reminded us about what is essential: the value of family, real friends—and the strength to be found in unity.

While the current setting is a test to most of us, and being strong even when alone is commendable, still a divided house cannot stand—this is so for the film industry, where aside from artistic differences, there are those who are drawn into factions that perhaps flatter or cater to their biases and personal interests.

As we strive to remain safe, following protocols as we should—we are deeply troubled: film workers have lost or shifted jobs; movie theaters are closed, their reopening uncertain as streaming is the safer and more convenient option; some distributors have closed shop; creating films now is doubly expensive in obedience to new COVID-19 guidelines; producers are afraid to invest in what they cannot recoup—so cheap films will be made; meaningful art films are shelved because people these days prefer to pay for shows that will help them escape the present darkness in their lives. Film festivals, which not only give joy but also allow filmmakers to showcase their creativity and earn, are now either postponed or conducted online. Even sadder, there isn’t enough support from the government toward an industry which has, for decades, been a great source of revenue.

Getting viewers to the theaters was already a battle before the pandemic, now they will be wary, and reconsider where they pour their money into—and this leads us to speak of “streaming.”

These days, it is not that difficult to get into good streaming platforms such as Netflix. But unlike the big companies who can gamble or afford to wait, to a small filmmaker who must earn to pay his investors, it is honest to say that streaming platforms cannot purchase films that filmmakers may profit much.

Look at the Metro Manila Film Festival: In 2019, the entries’ gross sales were close to a billion, while the most recent edition only collected a fraction of that. We must also consider that streaming is more geared towards the middle class who can pay the fees and has internet connection. On the other side, there’s YouTube and piracy. There are other options, such as television and streaming for the general public, but these avenues cannot accommodate all who need work, and there is still that difference between mainstream and independent filmmaking, especially regarding funding, content, purpose and target market.

With these problems besetting us, the government should step in. True, entertainment is not its main concern these days, and it’s understandable that public funding must be funneled toward vaccine and health-related programs. But it must be remembered that even though the film industry has rarely ever been on the priority list of administrations, it is among the most heavily taxed, and these taxes were utilized for education, agriculture, health and other government services. These billions in taxes were paid without much protest, whatever the weather or political situation in the land was. Now this industry and all those whose jobs are connected to it need the government’s assistance. It is a very difficult time, and we still do not ask to be the priority—but that film workers, especially the smaller ones, receive not just mere words or gestures, but tangible support.

Again, unity. When we wish to raise our issues as an industry, it is preferable that mainstream and independent creators should convene, make a list of their needs, take the time to consult and listen to the smallest workers. 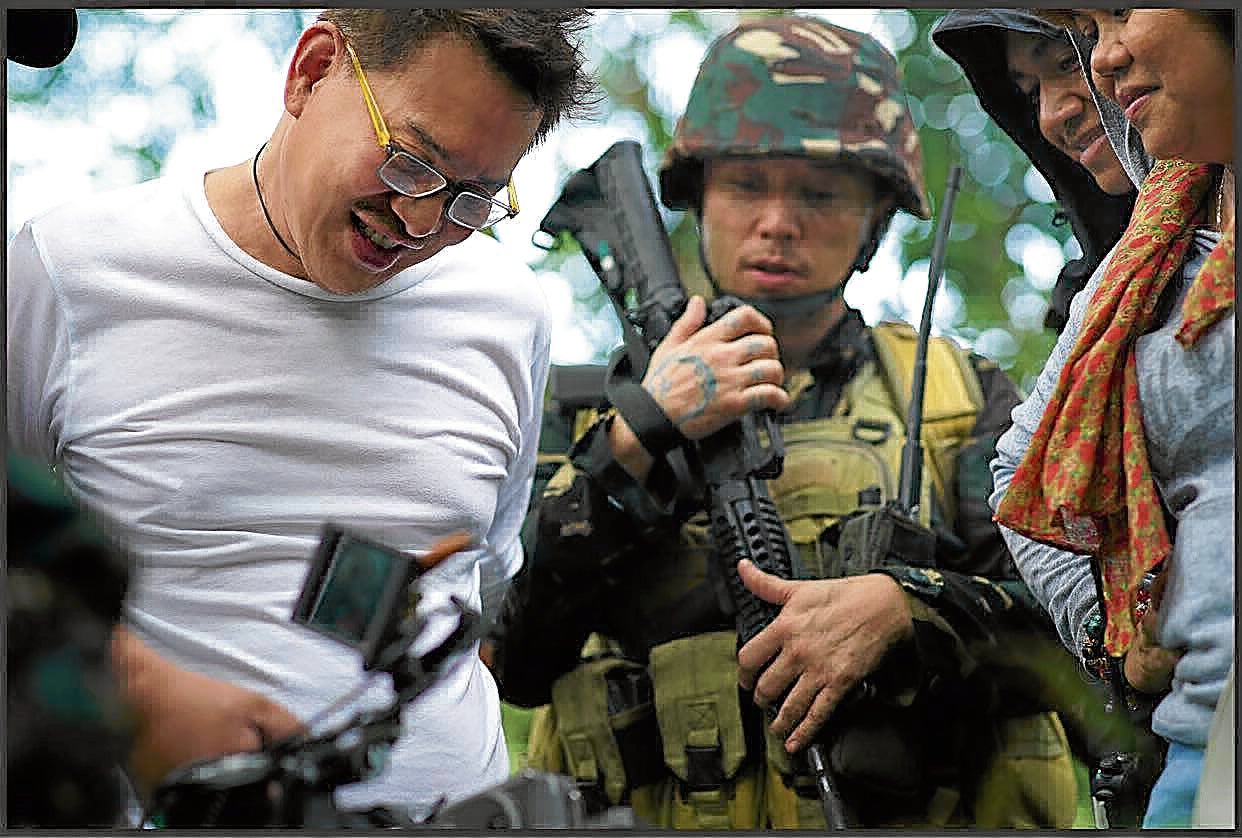 A light moment on the set

All may have good intentions, but the view from the top level and that from below are very different things; perceptions between those who have machinery and money and those who have not. Bawat problema ay iba-iba ang solusyon. Alamin natin ang puno’t dulo ng sakit para malaman natin ang tamang solusyon—kung anong tulong ang dapat nating hingin.

Then, as one, we can speak about the solutions we require, of our needs to the government, that must have the will to help us. Working together to make a great difference will be a long and complicated process, but let us not stagnate because of our divisions.

Those in the film industry are grateful for cash incentives but also need long-term support. I do not have the solutions and cannot single-handedly tackle the industry’s problems particularly in the time of pandemic, but I would like to suggest these very basic assistance, which the government can give:

• Create bigger film platforms for streaming that is accessible and affordable to audiences, where filmmakers may fairly earn

• Actively encourage viewers to watch and pay for Philippine-made films

• Subsidized COVID tests for film workers and hospitalization (during pandemic)

Government institutions like the Film Development Council of the Philippines (FDCP) and their partners have great mandates and though they may be functioning, even at the best of times they still receive complaints from both government officials and filmmakers; they cannot support the film industry on their own.

Even actors who enter politics, after using their stardom to achieve their political ambition, are rarely seen actively pushing for a substantial change in terms of laws and programs to raise the film industry. We strongly agree that they must prioritize their constituents, but helping the arts is certainly not against their sworn duty, for these voters are the audiences of filmmakers. Public servants can uplift it if they so will it.

For many, it is either we bend or we break. Yes, this is a time to adjust—to discover and develop our capabilities, to remake ourselves—but for film workers, what other adjustments must we make? Others sell, cook, become delivery men, shift occupations—there’s no shame in this. But some have given up filmmaking, while others have no work at all. It is painful that even the most well-meaning employer can be reduced to choosing who is essential—when all these people, the so called non-essential have toiled with you for years.

And how far are we willing to bend? If producers refuse to invest in a film that cannot guarantee a quick return of their money, should the filmmaker then stifle his vision, produce cheaply made films with the usual tried-and-tested content that appeals to target groups? Staying afloat is the main goal for most of us, and there are things people are forced to do in the name of survival, but perhaps that’s not bending anymore—that’s breaking.

Even after the war, the film industry rose with renewed vigor. It is easy to say we will recover, but if we bend too much, there are those who will break—but this is avoidable, if the strong among us will support our weaker members.

Let us not rely on resilience alone. I hope the industry unites from within, and that the government will swiftly succor those who need it. The steps we take this year may be smaller and more cautious, but together we need not take a step backward.

Read Next
‘The Clash’ 3 winner Jessica Villarubin bares most difficult part of her career journey
EDITORS' PICK
Unleash the photographer in you this World Photography Day with vivo smartphones
Look Through: The fate of impounded stray dogs
DOH says COVID-19 cases plateauing, but public shouldn’t be ‘complacent’
What to watch out for when selecting a video surveillance solution
23,000 cops to be deployed nationwide for school reopening
House energy committee chair Arroyo bats for cheap electricity
MOST READ
Sharon Cuneta asks for prayers for friend in ICU who suffered silent stroke
Light therapy could be the answer to your sleep problems
Korina Sanchez reunites with former ABS-CBN co-anchors Julius Babao, Cheryl Cosim
Solons file resolutions seeking probe on ABS-CBN, TV5 merger
Don't miss out on the latest news and information.