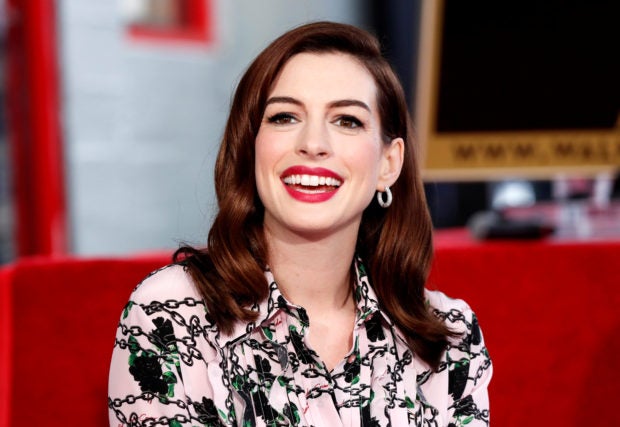 FILE PHOTO: Anne Hathaway poses as she is honored with a star on the Hollywood Walk of Fame in Los Angeles, California, U.S., May 9, 2019. REUTERS/Mario Anzuoni

LONDON — As the rest of the world was shutting down to stave off COVID-19, U.S. star Anne Hathaway found herself starting up a whole new movie project – a rom-com heist caper set in the pandemic still raging around her.

“I don’t think either of us quite know how we pulled it off,” Hathaway told Reuters as she sat down with her co-star Chiwetel Ejiofor to talk about “Locked Down,” the result of their labors that started streaming on HBO Max on Thursday.

The film tells the story of a couple on the verge of breaking up, until coronavirus restrictions leave them stuck together in London.

The frustration from their forced cohabitation and a series of plot twists boil over into a scheme to steal a diamond from Harrod’s department store.

Shooting started in the autumn when Britain was ramping up restrictions again after a relative lull. The race was on to get everything done before the full shutters came down again, and to get the film out while the setting was current.

The two actors agreed to do the film after seeing only an incomplete script.

“It was one of those things that becomes a kind of blur, you know,” said Ejiofor, the star of “12 Years a Slave”, “Kinky Boots” and “Serenity.”

“Maybe the first couple of days I was on top of the lines, you know, and then there was just the rest of the shooting schedule. And it was complex, but it was fun … to kind of play in that and to be on edge.”

The pandemic framed the plot, and had an equally strong influence behind the camera.

“It’s a strange thing to make a film with everybody in masks,” said Ejiofor. “There are people there that I did not see their full faces. I probably will pass them in the street one day and then they’ll cover themselves and I’ll be like, oh, it’s you!”