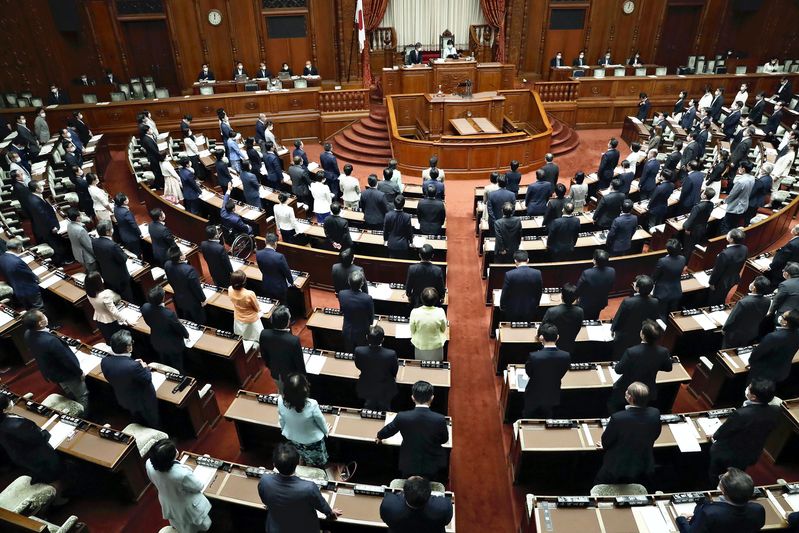 Legislation to revise the Copyright Law is passed during a plenary session of the House of Councillors on June 5, 2020. Yomiuri Shimbun file photo

TOKYO — The damage caused by pirate websites that infringe on copyrights of manga and other such works has again become serious. In November alone, the damage was equivalent to ¥35 billion ($339 million), it has been learned.

A revision to the Copyright Law that makes it illegal to download pirated materials knowingly came into force on New Year’s Day, and the publishing industry is calling for renewed attention.

According to data compiled by ABJ, a group of publishers and other relevant entities, the number of accesses to five major malicious pirate sites rose to 116 million in November, a nine-fold increase from 13 million in January 2020. This meant that ¥35 billion worth of manga was read for free.

Pirate website Mangamura caused about ¥319 billion in estimated damage in a six-month period from September 2017. After it was shut down in April 2018, activities of such pirate sites had subsided for a while.

However, the damage has expanded again as pirate sites using more sophisticated methods have emerged. The expanded damage is also attributable to the increase in the number of people spending more time at home amid the novel coronavirus pandemic.

According to the ABJ, there are currently 700 sites in total: 200 aimed at domestic users and 500 targeting overseas users. Vietnamese-linked pirate sites, whose operators are believed to be in Vietnam, have been gaining momentum. It is said to be difficult to track down these sites as they use highly anonymous servers and other sophisticated methods.

Under a revision to the law that took effect in October, people and entities involved with pirate sites, including operators of websites that direct users to pirate sites, became subject to criminal penalties. The law revision that came into force on New Year’s Day targets individual users acting maliciously who download manga and other materials, making them subject to criminal penalties.

According to a survey by the Internal Affairs and Communications Ministry, 50.3% of respondents said they had never heard that downloading pirated materials was to become illegal.

“Piracy has the power to destroy the market by generating a large amount of revenue without bearing the cost of creating the works,” said Kensaku Fukui, a lawyer specializing in copyright issues.