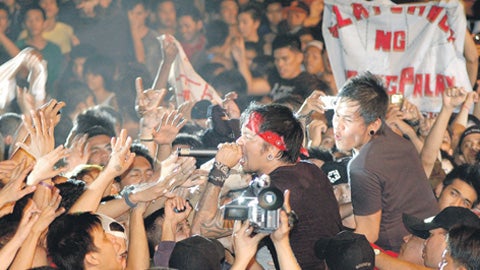 JAMIR Garcia of Slapshock dives into the crowd. FILE PHOTO

MANILA, Philippines — For kids well into the ’90s and early 2000s local rock and metal scene, the untimely death of Slapshock frontman Jamir Garcia is a sad news to bear with.

But no amount of condolences and prayers can actually explain how big Garcia and Slapshock were to the local scene, and to people whose lives they touched.

Not because they got into a variety of projects with other Southeast Asian bands.  Not because they were the first Filipino band invited to play in the Dubai Desert Rock Fest, where other well-known bands come to play.

It’s because they are rarely widely-appreciated for their biggest contribution: being a part of a triumvirate that signaled the growth of a sub-genre in the Philippines, which defined a generation of listeners and musicians.

Slapshock and Garcia undoubtedly made a name for themselves, but they will always be attached to a three-headed monster: Queso and Greyhoundz.

Although they had different approaches to song writing and overall sound, these three bands are credited for initiating the nu metal movement in the Philippines — a branch off of the metal genre music that infused hip hop elements and rap into fast-paced drumming, groovy bass lines, and low-tuned guitars.

Queso always had that diverse, tropical and reggae vibe, while Greyhoundz’s music was heavier and focused on raps.  Slapshock rapped a lot too in their earlier days, but as it matured, it developed a melodic form of making music without losing its metal or metalcore touch.

It is unclear from where the tagline came from, but fans started calling them the great triumvirate on whatever platform they could access their music — on YouTube, Facebook, and other song streaming sites and review pages.  Up until now, you could see playlists on YouTube featuring songs of the three bands altogether.

All three bands had their own cult following, with Slapshock fondly calling their fans members of “Slap Armies” and Queso calling their followers “daga.”  Campuses in the early 2000s would surely have at least one band that played cover songs from these bands.

It is also not rare to see them together in a gig, as they had various collaborations: on Greyhoundz’ first album, the first verse of the track Taking You High features Garcia instead of Greyhoundz vocalist Reg Rubio, with Queso’s frontman Ian Tayao helps Rubio in the chorus.

While the lyrics to Queso’s Trilogy — or any Queso song for that matter — may be deep and confusing, it is believed by fans to be a reference to the three bands.  Tayao has previously admitted in a gig that it is about the bands, while Garcia and Rubio have appeared in gigs where Queso would play Trilogy.

And if adults see this music as mere noise and distortion, the youth of that generation revered them so much because they became an outlet for all the angst and checked emotions that young people cannot freely express.

A trip down to the mosh pit and they’re free from the problems surrounding them.  And for most of them, Queso, Slapshock, and Greyhoundz were a welcome release.

But maybe, the absence of this release due to the pandemic had a toll on the bands’ mental health: Queso, Slapshock, and Greyhoundz have been noted to attract massive crowds that can sometimes be rowdy and unruly.

For some, that is the essence of what youth is.  But take that away from the people who participate in that, and they may suddenly grow restless from not being able todo what they love.

Moving forward amid the pandemic

Heartfelt messages poured out from bands and musicians who have worked with or who may have been influenced by Slapshock — especially those from Greyhoundz and Queso.

Rubio posted messages on his Instagram account about how the two of them competed, but had a strong sense of respect and brotherhood despite going neck and neck sometimes.

Tayao — now a game streamer — went live on his channel to talk about the importance of mental health and facing one’s problems with the help of people around especially the problems caused by the COVID-19 pandemic still lurking around.

He believes that the lockdowns have made a huge impact on bands as they can no longer do something that they love — make music and play live, feeding off the energies of people watching them.

Tayao did not directly shed light on some issues that Slapshock faced — like recent controversies involving the groups’ disbanding — but gave cryptic messages about how artists and musicians like them should focus on the craft.

“Na, parati naming tinitignan ‘yong kultura, ‘yong craft.  Focus on the craft, not on the fools, not on the superficial things.  And I’m still trying to analyze things as we go,” he added.

Prior to Garcia’s death, Slapshock was already facing internal struggles.  But with the renowned vocalist’s demise, it is unclear what future lies for Slapshock now.

If there is one thing clear, the country just lost one of the faces, one of the trailblazers of the Philippine nu metal scene.  And while Garcia would not come back to life, the messages of their songs, the lessons he imparted from his life to death would remain in the heart of their fans.

It is also a reminder to check on their friends and families from time to time, because people may not know what others are going through because of the new circumstances affecting humanity right now.