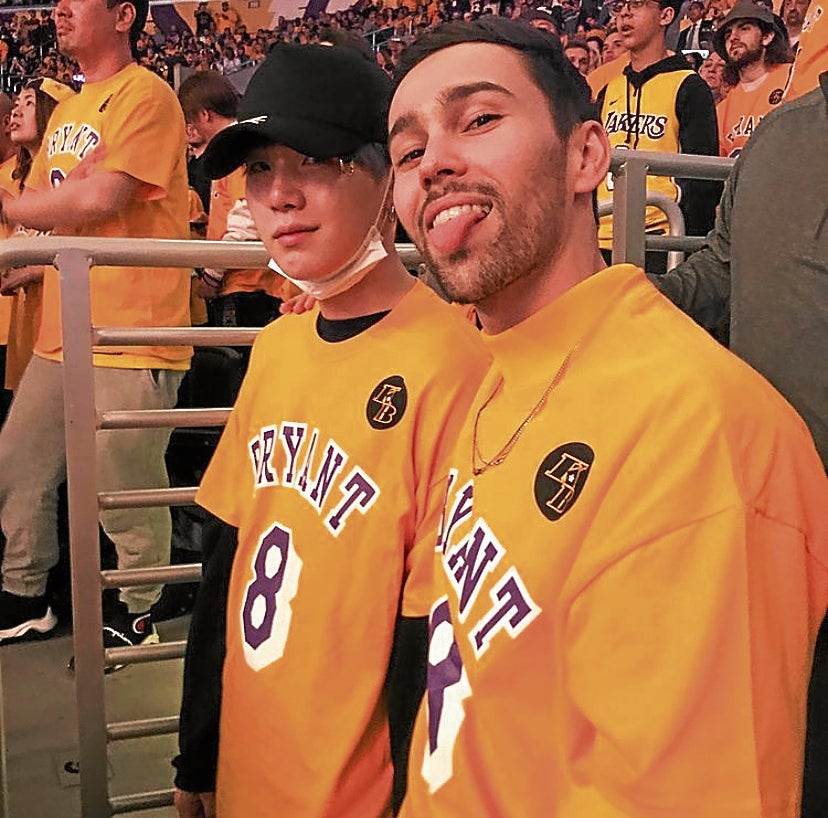 It all began with their mutual appreciation for each other’s music.

For the past few years, American pop artist Max Schneider, who goes by the mononym MAX, and Suga, a member of today’s biggest pop music group, BTS, have been exchanging praises and shoutouts on social media, in interviews and on livestreams.

Before long, they were hanging out in Seoul in January, and bonding over Korean barbecue and basketball in Los Angeles in February.

Their continued interactions gave off an impression that a potential collaboration between the two wasn’t too far-fetched. And true enough, three months later, MAX had a feature on “Burn It,” a track he cowrote for “D-2”—Suga’s second mixtape that he released under the name Agust D.

This time, it’s Suga’s turn to make an appearance in MAX’s record. The Korean rapper-producer came up with a verse for “Blueberry Eyes”—the song whose story he loved the most from MAX’s second and latest album, “Colour Vision.”

MAX considers himself a fan of Suga. And being able to work with him, he related, was amazing; a dream he’s thankful for.

Suga’s musical talent is already a given. But it’s his character—his kindness and humility—that really drew MAX in.

“It’s remarkable because it goes to show that people who are the greatest at what they do are also some of the most humble and kind … They’re excellent and have nothing to prove, so they just let their work talk,” MAX said of Suga, whom he calls his “brother” and a future “uncle” to his soon-to-be-born baby girl with his wife, Emily.

“I think that’s why I have had such a bond with him. I love that he treats people with kindness,” MAX added.

Hailed as a “popstar to watch” by Billboard, MAX has put together an impressive career so far.

The 28-year-old singer-songwriter’s debut album, “Hell’s Kitchen,” has garnered more than 1.2 billion streams globally. His biggest hits, “Lights Down Low” and “Love Me Less,” have been streamed over half a billion and 170 million times, respectively.

Outside of music, MAX has landed numerous television and theater projects, including the Nickelodeon show “How to Rock” and the Broadway musical “13.”

“Colour Vision,” however, could very well be his most important work yet, especially because it came on the heels of a vocal cord surgery, which, for a while, had him worrying about his career.

“I wrote the majority of this record after being silent for four months and after almost losing my voice through a surgical procedure [in 2018],” MAX said. “When I could finally sing again, it meant so much more to me. My perspective changed completely and this album encapsulates that outlook.

“Finding the color in the world right in front of you where it once felt like a dark tunnel you may never reach the end of,” he added. 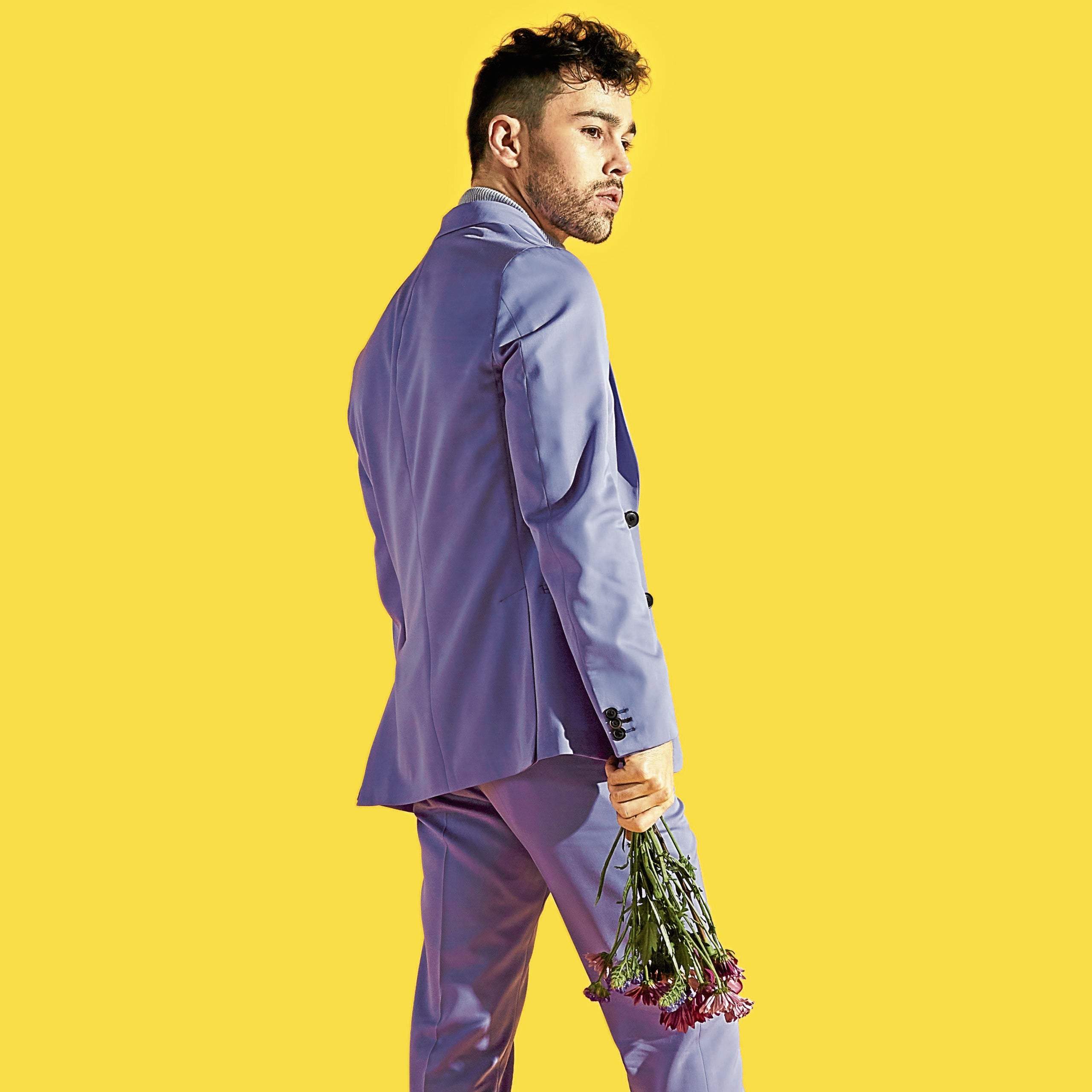 Here’s our Q&A with MAX:

How did you deal with your vocal cord issues?

A lot of artists go through it, but it’s not as openly talked about as, say, an athlete getting an injury. I didn’t really know much about it. I had a polyp … it happens from overwork, singing too much, doing too many shows in a row and not resting. You have to pace yourself.

Were you afraid that it would change your voice?

I was scared as hell. But after training my voice, it came back stronger. But at that moment, I wasn’t hitting the same notes and it took a long time to get back to my healthy sound … It made me appreciate my voice more. Now, I always warm up if I have to sing. I realized that I have to take care of my instrument more.

What was its impact on you?

It made me feel more present [at the moment]; that you have to take care of yourself as you go for your dreams. At first, I felt like I was just focused on my dreams and not making my health a priority.

The first song I wrote was “New Life,” which was the first song I pitched to Suga, but he ended up choosing “Blueberry Eyes.” It’s about me saying I’m controlling my destiny again and not letting anyone else say what I can’t do with my life.

It was just a big moment, a phoenix moment that reignited my life and career… At that moment, I didn’t feel great, but looking back, I’m grateful it happened, in a weird way.

I got to come out from the depth of that darkness, and I felt like it was me finding my joy again and colors in my world. That’s the theme and I hope it inspired others to find different joys and love in life.

Every song is deeply personal, whether from a specific trauma or an exciting moment in my life. “SOS” is about the surgery my wife had, and thinking that she wasn’t going to be with us anymore after that.

“Blueberry” is on the opposite end of the spectrum. It’s about falling in love again with the one you love. I hope it connects to listeners in their own way.

How does this new album differ from your previous one?

I have a more complete vision here. In “Hell’s Kitchen” … there are songs I’m really proud of. But here, I felt like I went in knowing exactly what I wanted it to look and sound like. I just committed to that. And I was proud of the outcome. 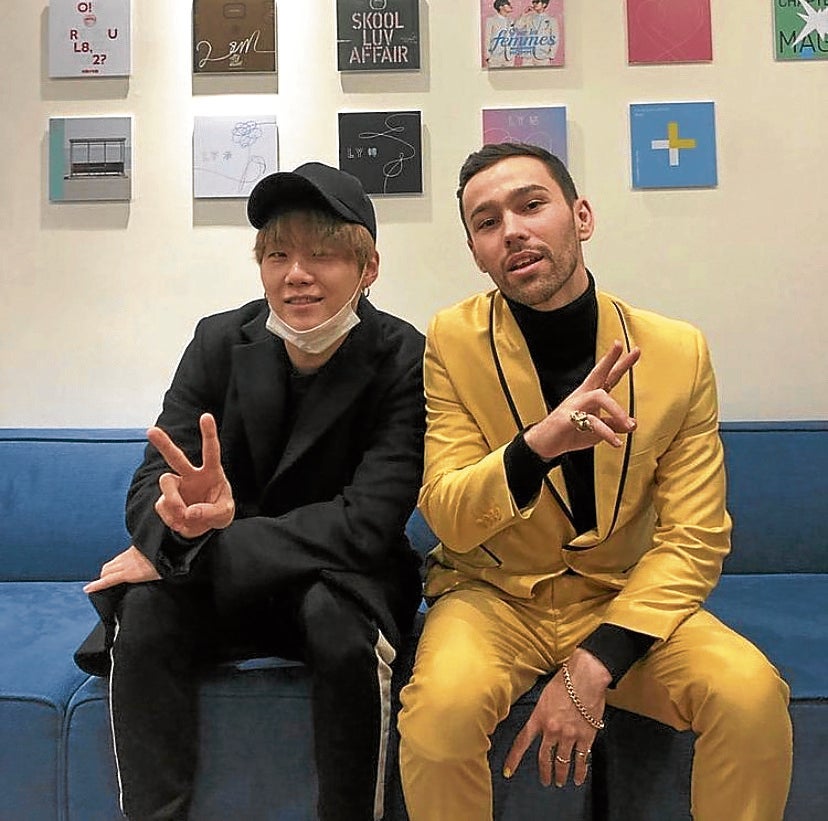 Can you tell us more about “Blueberry”?

I have realized that what makes my music connect with others is that it’s coming from a place of love. I wrote it for my wife who has these big, beautiful blue eyes. It’s about dreaming what it would be like finding the person you’re meant to be with … thinking about the time I was dating the wrong people and wishing I could find someone, then finally waking up and seeing that person every morning.

What have you learned from working with Suga?

That language is transcended by music. That we can combine our native languages and come up with a mutual story that people can connect with, whether they know one language or the other. It’s unreal … I have also learned that members of the ARMY are unbelievable, warm and dedicated.

Suga is an accomplished songwriter himself. Any more future collaborations?

I feel like we bonded so much because we’re so into the weeds of music. He produces and writes. Being part of his Agust D mixtape, “D-2,” through the song “Burn It” was where it all started.

Once, I was trying to find the right song for my album. He actually sent me a production and a little bit of a verse he had for a different song, and said like maybe we can do this … Since we have that connection musically, and he’s such a good producer and writer, I’m sure this is just the beginning of our musical collaborations.

Have you guys talked about the idea of fame? How do you make sure it doesn’t consume you?

You have to surround yourself with good people … that reminds you that you’re human and that you’re doing this for the experience. That’s important … And I think that BTS has that mentality and humble quality that I think are very purposeful.

What else have you been doing amid the pandemic?

We’re having a baby, and she’s going to be here soon! We have been trying for a bit, so I guess she chose this time to come into the universe. My entire pandemic life is seeing my wife pregnant, and it’s amazing to have this moment … That’s what has kept us busy in between doing all the music and videos … The universe has its own plans.

You have also done theater. How does that figure into your artistry?

It gave me a unique perspective. I was ashamed about it for a while; I didn’t want people to know about my background because I thought people wouldn’t take me seriously as a recording artist.

But now, I’m proud of it. There’s a very specific energy and storytelling that comes with the songs people from that world write. And I try to bring that into the music videos and my live performances.