The couple arrived at the Pasay City Hall of Justice at around 4 p.m. Wednesday. They filed a physical injury complaint against the columnist and radio host who allegedly kicked Barretto at the Terminal 3 of the Ninoy Aquino International Airport during a brawl Sunday, May 6.

Barretto’s husband Raymart Santiago and some of their companions allegedly ganged up on Tulfo who was caught taking pictures of the actress supposedly berating a ground stewardess of Cebu Pacific after the airline reportedly offloaded their baggage coming from Boracay. 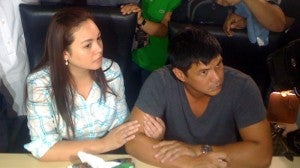 Raymart Santiago and Claudine Barretto sit together at the Pasay Prosecutor’s Office Wednesday, May 9, 2012, as they file a case against Philippine Daily Inquirer Ramon Tulfo following a brawl at Terminal 3 of the Ninoy Aquino International Airport on Sunday. JAY DONES/Radyo Inquirer 990AM

A child abuse complaint was also filed by the couple following the trauma and emotional stress their children allegedly experienced as a result of the incident, their lawyer Alex Avisado said.

The couple filed the case in response to charges of grave coercion and physical injuries filed by Tulfo against them before the Pasay Prosecutor’s Office on Monday.