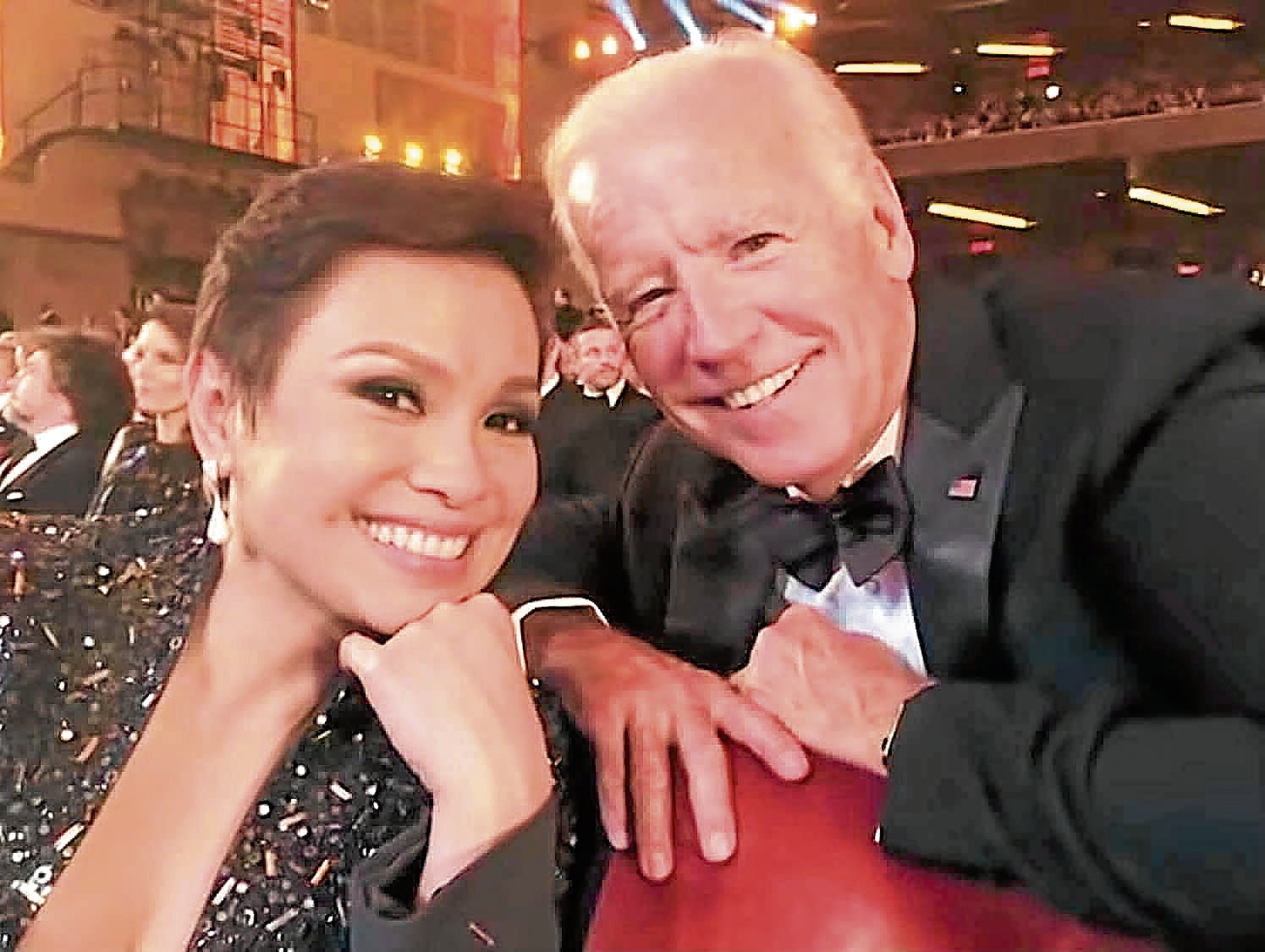 The author (left) with US President-elect Joe Biden

Although at the time of this writing, there is still vote counting taking place—with a recount imminent—with other results by all parties to be confirmed, right now it looks very official: Joseph Robinette Biden Jr. has been elected by the American people as the 46th President of the United States.

No, this Backstory is not going to be political in nature at all, and I’m hoping you’ll enjoy this one regardless of your affiliation.

In 2017, I was invited to be a presenter at the 71st annual Tony Awards. It was a highly exciting day and I was able to meet a great bunch of folks, even taking selfies with many of them: Josh Groban, Mark Hamill, John Lithgow, Lin-Manuel Miranda, Sara Bareilles, Ben Platt and Josh Gad.

I got to proudly walk the red carpet in a sparkly, gun-metal gray Rajo Laurel pantsuit, introduce “Miss Saigon’s” Tony presentation alongside “Ratched” star Jon Jon Briones, and attend the rest of the ceremony with my handsome best friend Victor Lirio.

What we didn’t expect was that a good amount of the night’s entertainment would be sitting right behind us.

Former Vice President Joe Biden and his wife, Dr. Jill Biden, were seated one row directly behind Victor and me (Dr. Biden was herself a presenter for the “Bandstand” number). We introduced ourselves once I returned to my seat, and after that, for just about every single commercial break, he would lean forward and pop his head between ours and deliver an interesting and funny comment.

No, I don’t remember any of the things he said unfortunately (perhaps we were just awestruck by his presence and by how unassuming he was), but I do remember laughing. A lot.

I remember comparing him to that really cool uncle that attends every family party, always ready with a snappy one-liner that sends the room into raucous, howling laughter.

I remember looking forward to the commercial breaks because of him—and he did not disappoint. He very graciously posed for photos during one of the breaks, a big smile from the both of us captured for all eternity.

Over the previous week, I watched the elections intently, losing a tremendous amount of sleep as a result. I was glued to the news, watched as each state would turn red or blue once the official tallies came in. There was the expected as well as the unexpected, and the wait for Pennsylvania’s official tally felt like an eternity. But once it did, there was joyful noise to be heard.

Many of my friends were celebrating on Facebook as well, feeling the same way. Quite a few of them were subjected to anti-Asian racism during the pandemic, victims of people who felt empowered to lash out at them when they did nothing wrong. Many of us felt fear and dread at the results of the last election four years ago, not because of politics, but because of how we would be treated.

But now, it’s almost as if the universe gave me permission to breathe deeply again because, to paraphrase one other friend, we no longer have to be afraid.

Seeing Ms Harris in a white pantsuit … a woman … the daughter of immigrants from Jamaica and India … Black and South Asian … standing at the podium showed me what is possible. That a woman of color can reach one of the highest offices in the land.

I strongly urged my own daughter to watch the speech, to show her how far she can go. And that any barrier to her ambitions does not exist with education, hard work and perseverance. That’s when my own ugly cry began.

Read Next
‘Kaputol’ cast wins in Milan fest
EDITORS' PICK
Unleash the photographer in you this World Photography Day with vivo smartphones
Look Through: The fate of impounded stray dogs
DOH says COVID-19 cases plateauing, but public shouldn’t be ‘complacent’
What to watch out for when selecting a video surveillance solution
23,000 cops to be deployed nationwide for school reopening
House energy committee chair Arroyo bats for cheap electricity
MOST READ
Sharon Cuneta asks for prayers for friend in ICU who suffered silent stroke
Light therapy could be the answer to your sleep problems
Korina Sanchez reunites with former ABS-CBN co-anchors Julius Babao, Cheryl Cosim
Solons file resolutions seeking probe on ABS-CBN, TV5 merger
Don't miss out on the latest news and information.