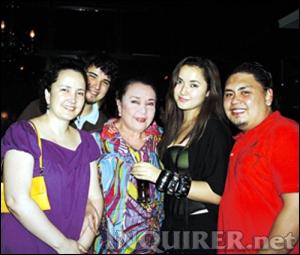 Gutierrez’s allegedly libelous tweets were posted on April 14 on the micro-blogging website Twitter while Abante published a story on the tweets on April 16.

In the seven-page complaint, Fuentes alleged that the ex-beauty queen accused her of inventing “false stories about” about Gutierrez and her family.

The tweets did not name anyone however.

“Although the tweets of Ruffa Gutierrez did not mention any name, clearly from her interview and from the article of Allan Diones, it can be deduced that she was referring to the complainant,” Fuentes said.

“The tweets of Ruffa Gutierrez and the article of Allan Diones were publication of false charges that tends to impeach the honesty, virtue or reputation or to hold the complainant to public hatred or ridicule,” the complaint stated.