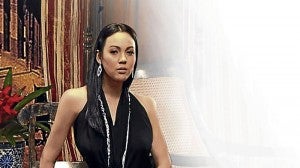 MANILA, Philippines–Two Cebu Pacific passenger arrival agents have told the Ninoy Aquino International Airport (NAIA) police they were “verbally assaulted” on Sunday by actress Claudine Barretto after the airline off-loaded her group’s bags from a midday flight from Caticlan, the gateway to Boracay, the popular tourist destination in Aklan province.

Cid Charisse Bocboc and Cristina Anne Ilagan made the disclosure in a “written statement” to the police intelligence and investigation department (PIID) of NAIA.

At this writing, the PIID had yet to furnish media a copy of their statement.

But Lieutenant Demetrio Sison, PIID officer in charge, confirmed to the INQUIRER that Bocboc and Ilagan had indeed made such claim. He declined to provide other details about their complaint.

The PIID had summoned the Cebu Pacific ground staff to shed light on their alleged verbal tussle with Barreto.

This paper tried but failed to reach Bocboc and Ilagan for comment on the incident. Both were “off duty” on Monday, according to Candice Alabanza Iyog, Cebu Pacific vice president for marketing and distribution.

“Cebu Pacific, however, had to off-load some luggage from that flight due to Caticlan airport’s weight limit requirements, which the airline strictly implements for safety reasons,” she explained.

Iyog said that “due to the short runway and the prevailing wind conditions at Caticlan, the plane can only carry a certain amount of weight, prompting our ground staff to off-load some bags. A total of 11 bags were off-loaded from that flight. Nine of them belonged to Barreto’s group (which also included her husband, actor Raymart Santiago),” she said.

“But the same bags were promptly loaded on another Manila-bound flight–Cebu Pacific flight 5J 340–which left Kalibo airport at 12:40 p.m. on the same day. That flight arrived here at 1:40 p.m. All off-loaded bags were delivered to their owners’ homes a few hours later,” she said.

According to Iyog, Bocboc and Ilagan “did apologize to (Barreto and party) for what happened and promptly attended to their concerns’ at the baggage claim area of NAIA Terminal 3.”

“When our arrival agents learned that their bags had been off-loaded in Caticlan, they offered them what we call “first need” compensation, which is P1,000 for every bag left behind. That’s (standard operating procedure). We also offered to refund their excess baggage worth P4,300,” she said.

Iyog pointed out “we have done what we’re supposed to do. However, (Santiago and Barreto) have yet to respond to our compensation offers.”

“But we are in constant communication with the Santiagos,” she added.

In a phone interview, he admitted that the MIAA was “not competent to determine and we’re not mandated to determine the guilty party in (Sunday’s) incident at NAIA Terminal 3.”

“Let’s wait for the courts to decide who’s at fault after the two sides have filed their respective complaints,” Honrado told the INQUIRER.

Tulfo has complained to the MIAA head about the airport’s security personnel’s failure to pacify those involved in the rumble.

“Siya (Santiago) ang suntok nang suntok. Nasasakal na ako. Ba’t nangyari ’yun eh may guards at pulis pa? … Noong dinadala ako sa presinto ng pulis, pilit nilang kinukuha ang cell phone ko … Hindi sila umawat noong minumura ako ni Claudine (Santiago kept punching. I was being choked. How did that happen when there were guards and police? … When I was being brought to the police precinct they were forcibly taking my cellphone),” the columnist lamented in a TV interview.

The other day, Sison said no arrests were made by the NAIA police because they had “two sets of complainants and we’re still trying to find out who really started the fight.”

On Monday, Hondrado admitted there was no CCTV at the baggage claim area of NAIA Terminal 3 that could have captured the brawl.

Takinaka, the Japanese firm that built the controversial airport, has yet to install the equipment, said Honrado.

Meanwhile, a 59-second cellular phone footage of the brawl has come out on Facebook and You Tube which showed that it was Tulfo who took a beating, contrary to claims by Barreto and Santiago.

In an ABS-CBN TV interview, Santiago blamed Cebu Pacific’s off-loading of their bags as the root cause of their troubles.

“Actually, ang puno’t-dulo nito yung mga bag na nawala (Actually, the root of this were the missing luggage),” he said as he also denied Tulfo’s allegation that he tried to grab his cell phone.