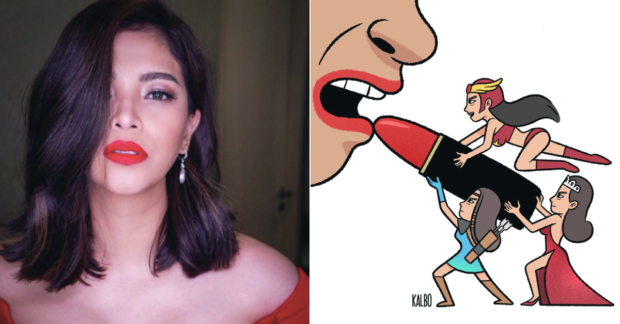 Actors and artists showed solidarity with Angel Locsin and female celebrities vocal about social causes by painting their lips red.

Locsin denounced the red-tagging aimed at her and her family members in an Instagram post last Friday, Oct. 23, where she used the hashtags #NoToRedTagging and #YesToRedLipstick.

She declared that she, her sister Ella Colmenares and relative Neri Colmenares are not part of the New People’s Army after a military official claimed that Ella is “underground” and part of the communist rebel group.

In response, showbiz personalities have come to the defense of the three women by donning red lipstick, while artists have also dedicated pieces to the female celebrities under attack.

Among these were Agot Isidro, Pia Magalona, Cherry Pie Picache, Eugene Domingo, and Bituin Escalante who called Parlade a “fascist pig” for his remarks.

In solidarity with empowered women and in support of Filipinos who are trying to be silenced by the powers that be.

Artist Kevin Eric Raymundo, creator of digital comics “Tarantadong Kalbo,” illustrated the three women in their most iconic outfits — Locsin as Darna, Soberano in her “Bagani” costume and Gray in her red lava gown — applying red lipstick on a man.

“Stick it to the man,” read the artwork’s caption.

Stick it to the man 💄 pic.twitter.com/2XABGonEGF

Graphic designer Albert Raqueño’s piece featured the three women with bright red lips on a tag and was inspired too by Locsin’s statement. The artwork was shared by Locsin herself.

Both Soberano and Gray have also stood their ground on their right to free speech.

Soberano’s lawyer Juanito Lim Jr. said in an interview with ABS-CBN News Channel, “[Please] know that Ms. Soberano will continue to exercise her constitutionally-protected right to free speech and expression without fear or restraint from anyone.”

Gray meanwhile urged the public in a statement, “Please don’t ever allow your voice to be silenced. You never know [whose] life may be impacted by your words.” JB