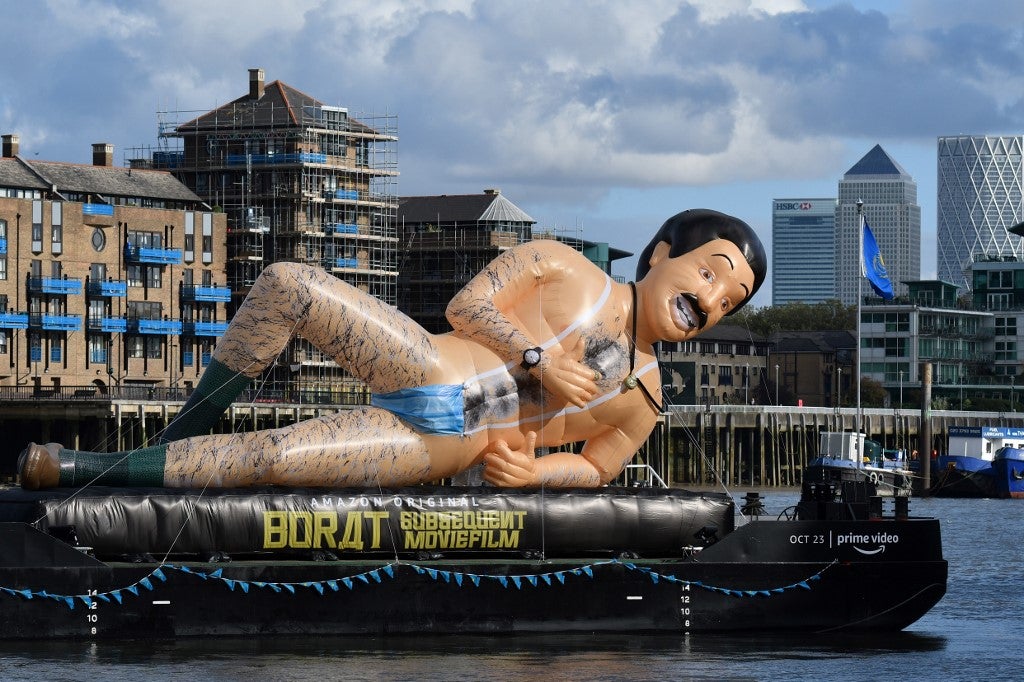 An inflatable in the form of Borat, UK comedian Sacha Baron Cohens fictional Kazakh reporter floats down the River Thames in London to promote the release of the sequel, Borat Subsequent Moviefilm on October 22, 2020. (Photo by JUSTIN TALLIS / AFP)

Donald Trump said Friday he has not been a fan of Sacha Baron Cohen — even before a clip from the British comedian’s new Borat movie forced the US president’s lawyer Rudy Giuliani into an awkward explanation.

Asked about the clip — which shows Giuliani in a faked “interview” with an attractive and flirtatious young woman — while speaking to journalists aboard Air Force One, Trump said: “I don’t know what happened.”

“But years ago, you know, he tried to scam me. And I was the only one who said no way. That’s a phony guy. And I don’t find him funny.”

Trump said the incident happened about 15 years ago.

The president did not provide further details about that encounter, but in a 2003 interview, Baron Cohen — playing the wannabe gangster Ali G — pitched a business venture to Trump: special gloves for eating ice cream.

Before the new Borat film’s release, word of Baron Cohen’s latest outrageous ambushes on unsuspecting participants had spread like wildfire.

On Wednesday, Giuliani issued an angry denial over the fake interview.

In the film, the encounter appears to leave the 76-year-old former New York mayor in a compromising situation, caught with his hands down his pants in the bedroom.

Giuliani said the scene was “a complete fabrication.”

“I was tucking in my shirt after taking off the recording equipment. At no time before, during, or after the interview was I ever inappropriate,” he tweeted.

“If Sacha Baron Cohen implies otherwise, he is a stone-cold liar.”

The comedian continued to poke fun at Giuliani.

In a video posted on social media, Borat himself leapt to his defense and accused the “fake news media” — a term often used by Trump and his supporters — of turning an “innocent” encounter into “something disgusting.”