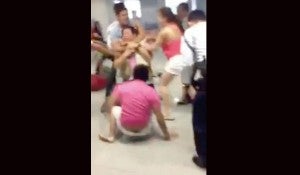 MANILA, Philippines – Philippine Daily Inquirer columnist and radio host Ramon Tulfo said that he will be filing a case on celebrity couple Raymart Santiago and Claudine Barretto on Monday, a day after the controversial brawl at the Ninoy Aquino International Airport (Naia) Terminal 3.

A Radyo Inquirer 990AM report said that Tulfo will lodge charges of physical injuries and grave coercion against the couple and those who aided them in beating up the columnist.

A Youtube video uploaded by user glamchiq00 showed the couple and several of their companions as they continued to beat Tulfo while airport security tried to break up the fight.

The brawl started after Tulfo refused to hand over his mobile phone which he used to take photos of Barretto as she scolded a ground stewardess over issues with their baggage.

For more of the report, listen to Radyo Inquirer 990AM.