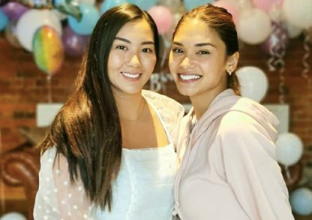 MANILA, Philippines — Days after Sarah Wurtzbach’s public rant against her sister, 2015 Miss Universe Pia and their mother Cheryl Alonzo Tyndall got everyone’s attention, she has since announced that she and her celebrity sister have patched things up.

“Me and Pia have fixed things privately,” Sarah was quoted in a Philippine Entertainment Report (PEP) report released Thursday.

“I don’t wish to comment any further about that,” she added.

This comes after Sarah unleashed her fury against Pia in a series of Instagram stories, which later made rounds on social media.

In Sarah’s posts, she alleged that Pia would make “insensitive” remarks about how much she is able to earn now when she sends her money.

Sarah also alleged that their mother was abusive and “narcissistic.”

Despite the hate, Sarah later appealed to everyone to stop bashing her sister, saying that her posts were only meant to vent out her sentiments.

But in the PEP report, Sarah clarified that she was not angry at her sister and her mother. Sarah also admitted that her way of venting her sentiments publicly was wrong.

The report also cited that the cause of Sarah’s “pain” was her  mother, and that Pia was only dragged into Sarah’s anger.

“As for how I attacked Pia due to this, I can’t comment on that. Not my story to tell,” Sarah said.