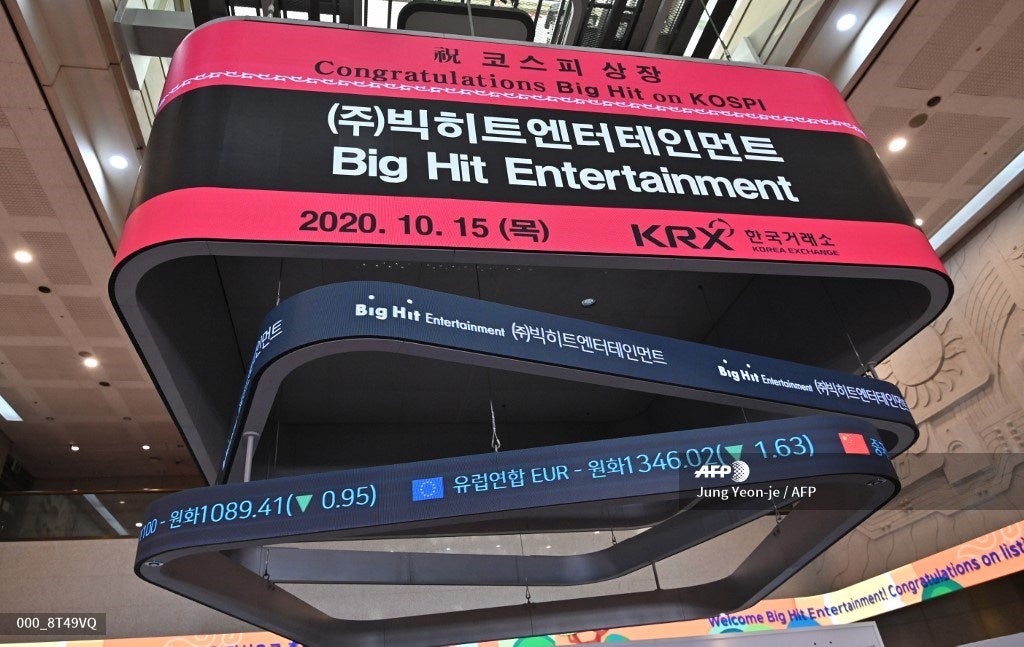 A welcome message for K-pop management agency Big Hit Entertainment is seen on an electronic board after the company’s initial public offering ceremony at the lobby of the Korea Exchange in Seoul on October 15, 2020. (Photo by Jung Yeon-je / AFP)

SEOUL, South Korea – Shares in the management agency of K-pop sensation BTS more than doubled on their stock market debut Thursday, making an instant multi-billionaire of its chairman and boosting the seven band members’ own fortunes.

The initial public offering of shares in Big Hit Entertainment saw staggering demand, with the public section oversubscribed 607 times and applicants receiving only a tiny fraction of their requests.

The firm’s centrepiece asset BTS have risen to global stardom in recent years, cementing their prominence in the world’s biggest music market in August with their all-English track “Dynamite” topping the US Billboard Hot 100.

At that level Big Hit has a market capitalisation of 11 trillion won — $9.6 billion — putting it among South Korea’s top 30 most valuable companies, and ahead of cosmetics-maker Amore Pacific.

Big Hit founder and CEO Bang Si-hyuk — who is retaining a stake of more than 36 percent of the firm — was already worth $1.4 billion at the IPO price, according to the Bloomberg Billionaires Index, and will have seen his net worth soar. 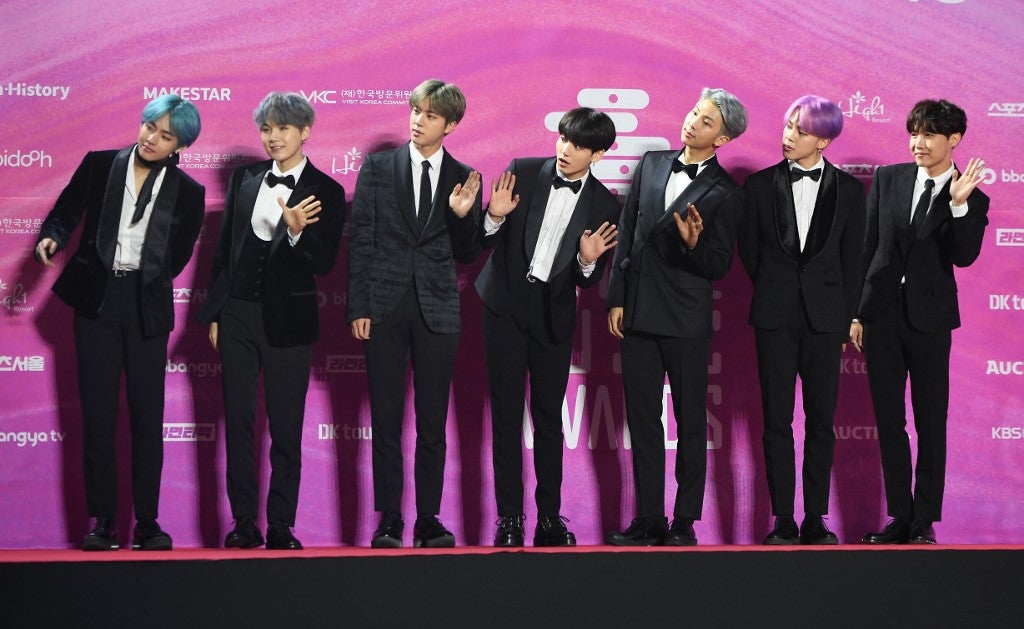 The flotation also boosts the band members’ own wealth — Bang gave each of them more than 68,000 shares in August, worth around $8 million at the IPO price and totalling 1.4 percent of the company.

Analysts had expected the shares to power upwards.

“Considering all the information about the firm now available, the IPO price could be the lowest price we will ever see,” Park Sung-ho of Yuanta Securities told AFP.

– Reporting for duty –
But there is one inescapable hurdle looming for the newly listing agency: mandatory military service for all seven boy band members, who made their debut in 2013.

South Korea requires all able-bodied men to serve in uniform to defend it against security threats from the nuclear-armed North.

Under the existing conscription laws BTS member Jin — real name Kim Seok-jin — aged 27, will have to report for duty by the end of 2021.

The other six members, born between 1993 and 1997, will have to follow in the coming years.

South Korea is currently debating exemptions for stars such as BTS, who have been at the forefront of the Korean Wave cultural phenomenon in recent years and are estimated to generate billions for the country’s economy.

But no such dispensations have so far been granted to pop stars, and if they are forced to leave the stage it could blow a hole in Big Hit’s finances: BTS were responsible for 97 percent of its revenues last year, according to the IPO prospectus.

Big Hit acknowledged their anticipated absence as a “risk factor”.

It is looking to expand activities such as “contents licensing sales” that do not require the artists’ “direct participation” to try to cushion the blow.

But it acknowledged their time off-camera “could have a negative impact on the company’s profitability and growth”.

Read Next
How extreme athlete Ash Dykes battled the odds to walk the 6,437-km Yangtze River for a year and end up with a Guinness record
EDITORS' PICK
Diego Maradona, 60: Argentine soccer genius saw heaven and hell
Makati, Baguio, Davao among 7 high-risk areas for COVID-19 transmissions
BOI calls for more manufacturing companies to repurpose facilities and help reshape COVID-19-stricken economy
OCTA Research warns vs gatherings as it notes slight rise in COVID-19 cases
Experience clearer calls nationwide with Smart VoLTE
Public warned against use of fake CopperMask
MOST READ
Ex-beauty queen Sandra Seifert posts photo of son with Cesar Montano
Shake-up continues: Another Cayetano ally booted out from House post
PH Navy gets ‘eye in the sky’ from US: 8 drones worth P710M
US tech firm bares heavy presence of Chinese vessels near PH-occupied island
Don't miss out on the latest news and information.