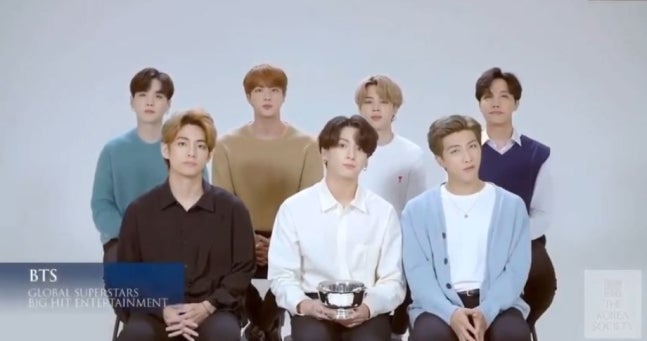 A screenshot shows BTS making a speech after receiving the General James A. Van Fleet Award on Oct. 7. (Korea Society) via The Korea Herald

SEOUL — Hit K-pop act BTS has come under fire in China for a remark about the Korean War, according to a Chinese news outlet.

BTS recently received the General James A. Van Fleet Award from the Korea Society, a US-based nonprofit organization. The award, named after a US commander who fought in the Korean War (1950-1953), is given to South Korean and US nationals who have strengthened the ties between the two nations.

In a video clip released by the organization on Wednesday, BTS member RM made an acceptance speech in which he said, “We will always remember the history of pain that our two nations share together and sacrifices of countless men and women.”

According to the Global Times, under the Chinese Communist Party’s People’s Daily newspaper, the speech enraged Chinese online users because it reflects a “one-sided attitude.”

Many Chinese deem the remark inconsiderate as China participated in the Korean War to assist North Korea and fought against South Korea and the US.

After the speech went viral, the hashtag BTS ranked third place on the “Hot Search” chart at Weibo, a Chinese social media platform. Some users expressed their anger against BTS, warned of a boycott against the band and said they would quit the BTS Army, the band’s fan group.

Read Next
Which film will follow ‘Parasite’?
EDITORS' PICK
Experience clearer calls nationwide with Smart VoLTE
Tracing app pesters MRT commuters
New Year, New Rediscoveries
Senate probe foils vaccine overpricing
Editorial: Unusual haste
Driving can be even more rewarding this New Year — here’s why
MOST READ
Duterte to firms: No franchise until you settle your accounts with gov’t
7 copassengers of UK variant patient can’t be traced
Norway advises caution in use of Pfizer vaccine for the most frail
#DefendUP trends after DND scraps agreement with UP
Don't miss out on the latest news and information.