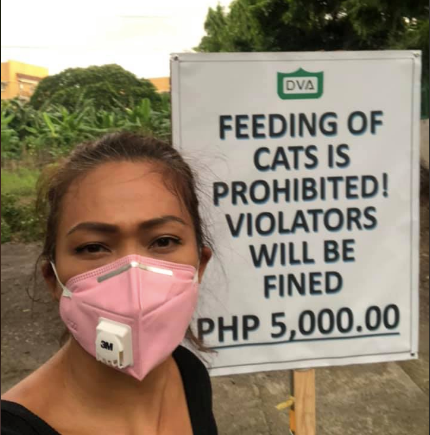 MANILA, Philippines — When is having a heart for abandoned cats ever become a violation of the law?

The admin of Dasmariñas Village Makati is preventing me to feed cats that were abandoned by residents. I have been…

This was what 2005 Southeast Asian karate gold medalist and journalist Gretchen Malalad raised when she was fined for feeding the abandoned felines inside Dasmariñas Village in Makati City.

In a Facebook post on Friday, Malalad, a resident of the village, lamented how the village administration prevented her from feeding the cats in an open lot.

“I have been looking out for them for the past 4 years,” Malalad said.

“They’re now planning to round up all the cats and do what? Kill them all?!! There are a lot of cat haters in this village. They should go after residents who throw away cats like a piece of trash,” she added.

For feeding the cats, Malad said she was fined P5,000.

In another post by Malalad on Saturday, it showed her and Compassion and Responsibility for Animals (Cara) Welfare Philippines President Nancy Unjieng protesting on the site where village security personnel approached the journalist who was feeding the cats.

Dasmariñas Village Makati admin has installed new signs at the vacant lot where we do the feeding of cats. They should…

Beside them was a sign that read “Feeding of cats is prohibited! Violators will be fined P5,000.”

“Dasmariñas Village Makati admin has installed new signs at the vacant lot where we do the feeding of cats. They should enforce REPUBLIC ACT 8485 instead of punishing compassionate residents! Security guards were there taking videos and pictures of us feeding,” Malalad said in her Facebook post on Saturday.

In an interview with INQUIRER.net on Sunday, Malalad said the vacant lot where she feeds the abandoned cats is known to be a  “dumping site” for felines in the village.

In that particular location, Malalad added, she feeds around 15 to 20 cats.

“I spend my own money for the food and kapag they [get] sick I take them to the vet,” Malalad said.

When feeding the cats, Malalad said that she uses a feeding bowl and wait for the cats to finish their food.

She added that Cara Welfare is also responsible for the neutering of the cats. “But for vet bills, I shoulder them,” Malalad added.

‘I just can’t stop the feeding’

When asked what specific law did she violate according to the village administration when she was seen feeding the cats, Malalad said: “Wala (None).”

(Even in the ticket that they gave me, the back indicates all list of violations, but it does not include ‘no feeding of cats.’)

“I’m asking nga for the written rules and regulations,” she added

Since Malalad has been feeding the cats for two consecutive days, despite the village administration’s warning, she was already fined P10,000.

Despite this, Malalad remains determined to feed the abandoned cats.

“I just can’t stop the feeding. The cats will die,” she told INQUIRER.net.

“They won’t address the illegal dumping of animals,” Malalad then said of the village administration. “Ayun dapat ang bigyan nila ng fine. (They could’ve given a fine for this instead).”

And does she plan to take legal action against the village administration?

“I haven’t contacted my lawyer,” Malalad said. “But I plan to consult him regarding the matter.”

INQUIRER.net has reached out to the Dasmarinas Village Administration about the incident but has yet to receive a response as of this writing.