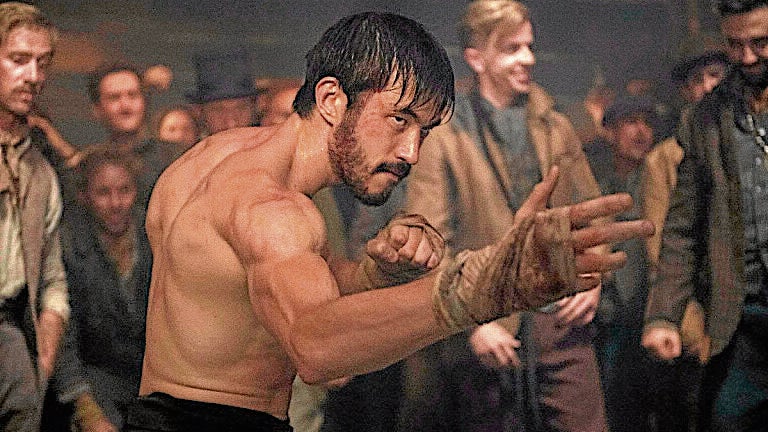 If you’re the type of action aficionado who prefers the mano-a-mano sort, framed by relatable, theme-driven stories that pack a mighty punch, you can’t go wrong with Cinemax’s period actioner “Warrior.” As it puts the Asian face and identity to a tale that predominantly takes place in the United States, what quickly sets “Warrior” apart from other action series is the man behind its original concept and treatment: Kung fu legend Bruce Lee, who died in 1973, when he was only 32 years old.

“Many of us actors [with Asian blood running through their veins] wouldn’t be here without Bruce Lee,” Japanese-British series star Andrew Koji said during our video call with him last week when asked about diversity in Hollywood productions. “I’ve been thinking about my career lately. Since ‘Warrior,’ I’ve been able to work just by doing acting, and it’s strange because there are so many talented actors out there who are struggling. Before ‘Warrior,’ I was starting to think I would never be able to do just this.

“But to realize now that I’m part of the growing diversity in the industry is a real blessing. I was reading his daughter Shannon’s book last night (‘Be Water, My Friend: The Teachings of Bruce Lee,’ which teaches people how they can apply his philosophies to their daily lives) because a lot of the fights we’re having now Bruce Lee was having early on with his career. “We are at the end stage of that struggle for diversity and equality. So, to see a change in how we’re being perceived and accepted in certain parts of the world is a blessing. I hope that change continues to unravel, and it’ll be better for all of us in the end.”

Ah Sahm’s story takes place in the 1870s, set against the backdrop of the Tong Wars in San Francisco’s Chinatown as it follows the gut-punching, bone-cracking experiences of the martial arts prodigy (Koji) who, in Season 1, migrates to San Francisco from China to look for his runaway sister Mai Ling (Dianne Doan).

In Season 2, Ah Sahm’s continuing tale takes on a prescient art-imitates-life progression as it mirrors the resurgent xenophobia taking place around the coronavirus-stricken world.

In the screeners we’ve seen so far of the 10-episode sophomore season, which premieres on Cinemax and HBO Go at 10 a.m. and 10 p.m. on Saturday, Chinatown’s rival tongs, the Hop Wei and the Long Zii (which is now headed by Ah Sahm’s empowered sister Mai Ling), are caught in a struggle for dominance in the midst of the growing anti-Chinese racism in the United States.

Ah Sahm continues to hone his skills at a notorious Barbary Coast fight pit, run by Rosalita Vega (Maria Elena Laas), as he convinces Young Jun to get into the opium business, with some help from their fierce and eager-to-please new recruit Hong (Chen Tang).

In our video chat last week with Andrew about the series (whose Season 1 has a 79-percent fresh rating on Rotten Tomatoes), the handsome 33-year-old actor admitted that adjusting to the physical requirements of the role was no walk in the park for him.

“I had no ego going in for Season 1, but I was a bit out of shape. I just wanted to do the best job I could,” he recalled when asked how different the new season has been for him. “But [fighting instructor] Brett Chan and his team really helped me get into shape. I was just a lad who had to learn so much to understand Ah Sahm’s physicality, and they helped me do just that every step of the way.

“At first, Brett and I clashed a bit, then we became brothers. By the time we did Season 2, we kind of learned how each other worked. He also knows that I try to do more than what’s needed, so he’s the one who says, ‘Whoa, Andrew, relax … we’ve got this.’ So, Season 2 was very collaborative. When you work with somebody for a long time, they can tell when you’re tired. You develop a shorthand, and the working relationship becomes easier and so much better.”

The actor is reportedly set to costar with Brad Pitt in David Leitch’s “Bullet Train,” and Henry Golding in Robert Schwentke’s “Snake Eyes: G.I. Joe Origins,” in which Andrew is cast as Storm Shadow. 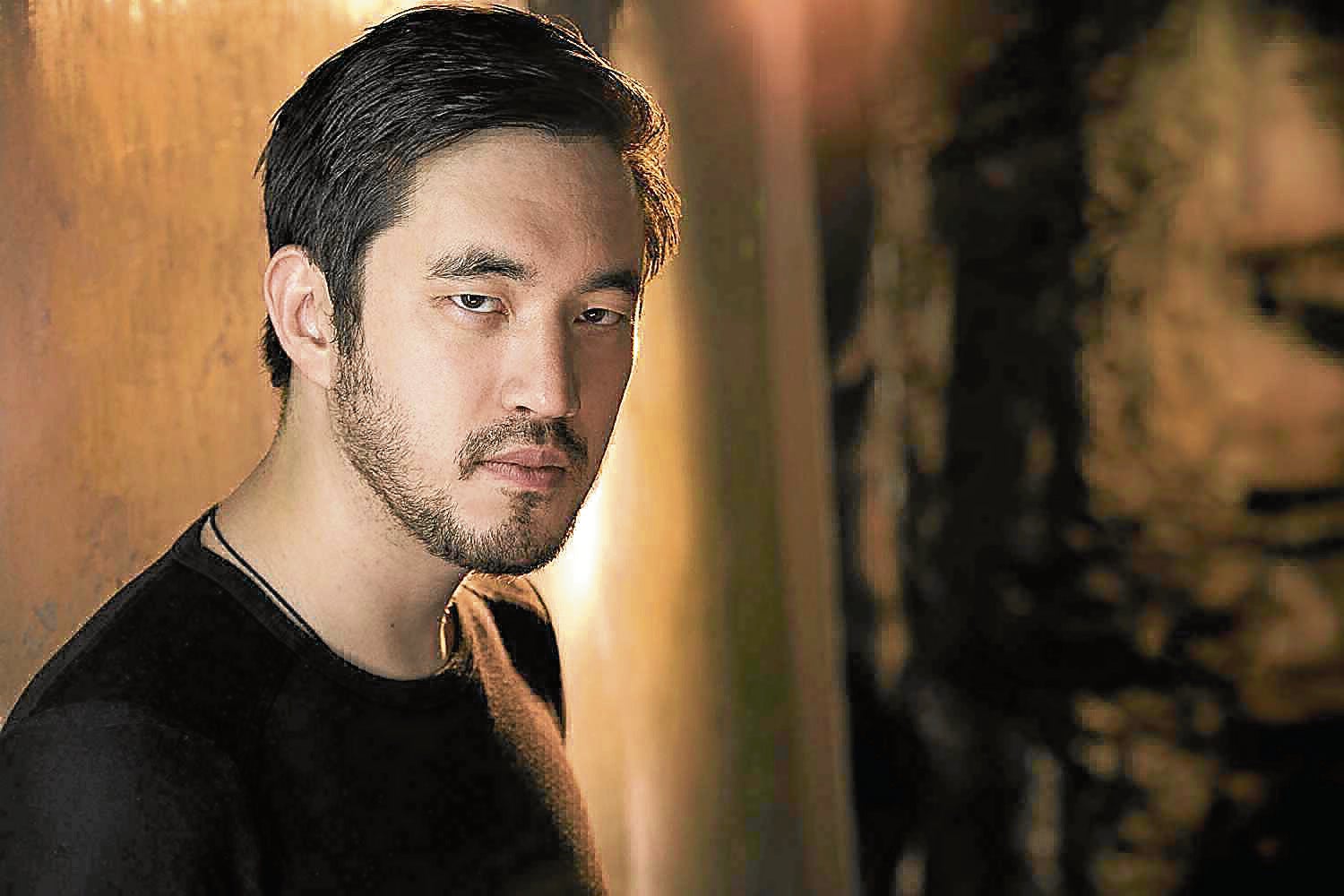 Our Q&A with Andrew:

What were the changes in your career from Season 1 to Season 2?

The changes aren’t huge, but the fact that I’m talking to you guys—that’s certainly been a change, because I was just painting walls before this (laughs). I didn’t really get lots of offers straightaway—I still had to audition, but at least now, I could get inside the room and show them what I could do.

Initially, the naïve part of me thought I might get an offer after “Warrior” without auditioning—because auditioning sucks (laughs)! But just to be able to talk to you (media)—that’s a good sign for me.

What’s your take on the politics of the show?

The politics of the show and how it has become relevant these days weren’t intentional—we didn’t plan it. The year 2020 has become a big surprise for everyone, but it wasn’t like we knew what was going to happen this year when we shot this in 2018. So, the politics of the show isn’t based on factual events—it just turned out to be very relevant for now, given all the things going on in the world.

So, that’s what’s scary about it—this was supposed to happen in the 1870s, but this show makes it look like we haven’t really learned much from our past (laughs). It’s like we’re in a similar situation, it’s just that we’re in the age of technology now.

What’s the new challenge for you in Season 2?

There was so much to learn in Season 1. I had to get inside the brain of the showrunner (Jonathan Tropper) and execute what he had in mind. I only had two months of physical preparation, to get into shape and learn the martials arts, before the cameras started rolling for the pilot.

For Season 2, I just wanted to do better physically and build stamina, like what Bruce Lee would have done if he were in my shoes. So, I didn’t stop training in between seasons and kept studying about diet, nutrition, the different ways of building muscle, and polishing the martial arts side of it.

The difference between film and TV is that in films, they can schedule your topless scenes from the beginning of the shoot, so you know when you have to look ripped. But for TV, you have to be ready all the time because they might throw in a topless scene next week and you’re like, “Oh, no. I just had a burger (laughs)!” I had to be in shape for the five and a half months that we were shooting because I was trying to raise my game for Season 2.

Right now? It’s lockdown in England, so there’s not much training going on (laughs). I’ll share with you something very interesting, though. I didn’t realize how much of an influence my training in “Warrior” has been on my life until I got my next project.

My character is not a martial artist—he’s an alcoholic, he’s down and out. But I found it so hard to stop training because it has almost become a part of what makes me feel good and ready for the day. Even if I don’t train as much as five to six hours a day, I still feel like I need to do a certain routine. So, right now, it’s just an hour or an hour and a half every day. Sometimes, I rotate one day on and one day off, and it’s mainly just fitness stuff—like cardio exercises, weight training to fill the muscles, and some martial arts to keep myself flexible. But, really, I kind of thought after “Warrior,” there was no reason anymore to train if I’m not doing martial arts. I just want to relax (laughs).

Your character is Chinese-American, but you’re Japanese-English. How do you balance both perspectives?

To get into character, I was worried about ethnicity at first, given the fact that I’m Japanese and British, and Ah Sahm is three-quarters Chinese and a quarter Caucasian, just like Bruce Lee was.

Jason Tobin (Young Jun in the show) and I had discussions about the Chinese experience and how it’s depicted in the series. But the show doesn’t always focus too much on playing every detail in that time period truthfully. Because if we did, I, as Ah Sahm, would have had a queue (where the hair on top of the scalp is grown long and often braided, while the front portion of the head is shaved), and I would have had more Chinese mannerisms.

But we weren’t worrying too much about that because Ah Sahm, like Bruce Lee, was always supposed to be an outsider—even to his own people. Bruce felt like he wasn’t Chinese enough, not Asian enough, or not Western enough.

That feeling of being an outsider was something I’ve always felt because of my dual heritage.

How do you channel Bruce Lee and his teachings?

Just by serving and studying him. I watched the 1993 biopic “Dragon,” which is a bit of a fantastical take on Bruce Lee. I read a book about him by Matthew Polly. I also asked Shannon who she felt her father was and what his energy was like. Then, I read about his philosophies to understand how his mind worked. I wasn’t attempting to replicate him—I was just trying to come up with my version of him. In his interviews, Bruce Lee was a most beautifully self-assured man. I just tried to tap into that.

What I do every day, I think of a line from an entry in his diary: I feel this power, this great creative, spiritual force within me that is greater than faith, ambition, confidence and determination. It’s all these things combined that helps Ah Sahm get through the day. And it makes me feel, “I’m the top. I’m a 10.”