Catching fire: How BTS finally vaulted into US radio airwaves with ‘Dynamite’ 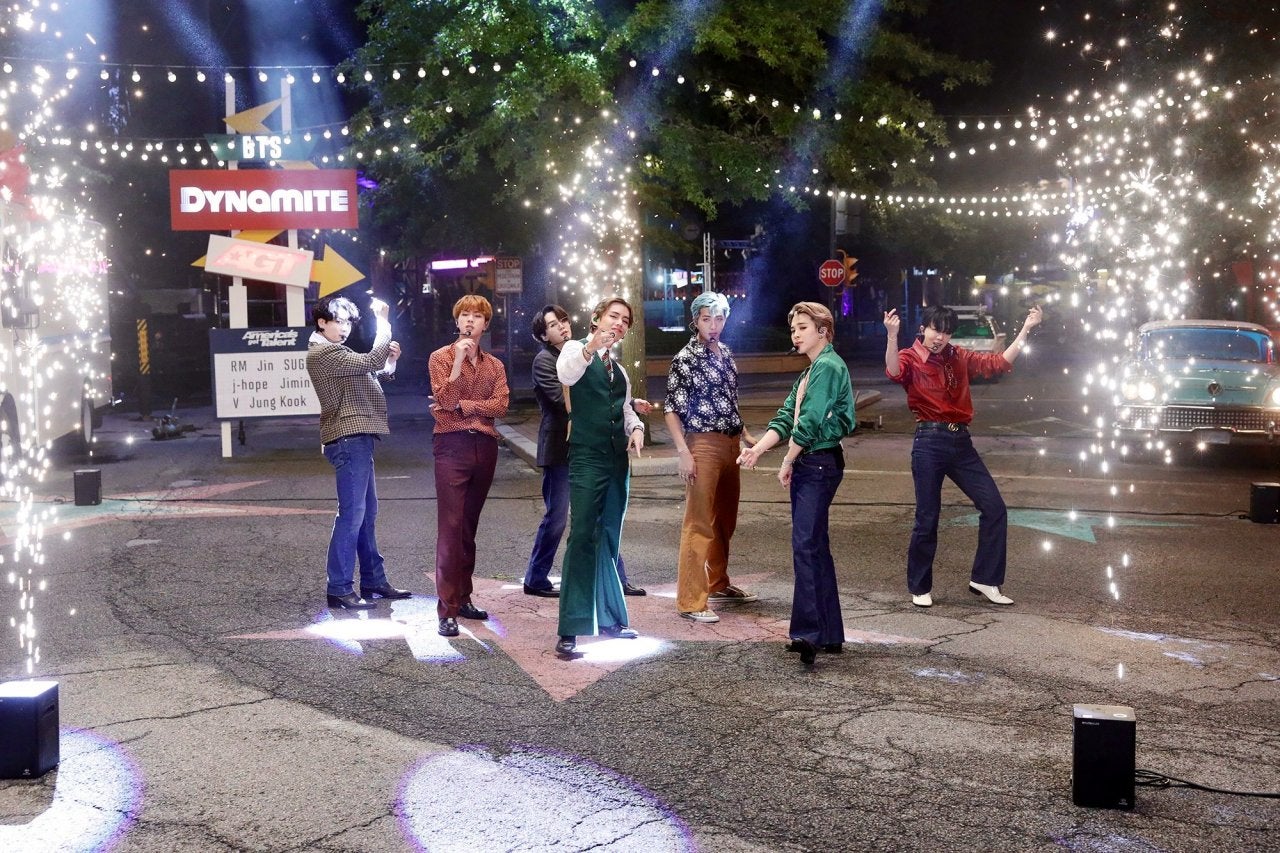 SEOUL — K-pop super group BTS is no stranger when it comes to smashing album sales and breaking music streaming records. But against its colossal brand recognition, the one nagging caveat for BTS especially in the West had been its lack of ample presence on radio airwaves — a key index in measuring the broad public appeal of an artist.

That was until its latest single “Dynamite” exploded globally, and especially more prominently in the United States and other Western territories, such as Britain. The septet made history last month by becoming the first South Korean recording artists to reach No. 1 on Billboard’s main Hot 100 singles chart with the disco-pop track.

Radio is a key component in aggregating the Billboard Hot 100, which also measures physical and digital sales and streaming elements in the mix. Billboard tracks airplay audience impressions from some 1,200 radio stations throughout America for the Hot 100.

In today’s era of smartphones that offers instant on-demand access and seemingly endless choices in an environment of a la carte streaming, radio remains powerful as a platform in terms of audience outreach. According to Nielsen, 272 million Americans listen to radio each week as of 2019, and given the increasing traffic and commute times, the figure is not about to diminish anytime soon.

Compared to the band’s past Hot 100 hits, “Dynamite” has delivered BTS its best performance to date on the American radio front, expanding its outreach toward the broader, casual music consumers in the US, many of whom may not have heard of BTS in the past.

Upon its release, the song marked BTS’ highest debut on Billboard’s Pop Songs radio airplay chart at No. 30. According to Billboard, “Dynamite” generated 2,301 plays in its first three days, surpassing “Boy With Luv,” featuring Halsey, which began at No. 35 with 1,230 plays in its first chart frame in April 2019.

And after several weeks, “Dynamite” is still going strong, having attracted 18.3 million airplay audience impressions in its third week ending Sept. 13 to debut at No. 49 on Billboard’s broader all-format Radio Songs chart.

The song has also earned BTS its career high of No. 15 on the separate Pop Radio chart run by Mediabase, according to Headline Planet. After topping the Hot 100 for two straight weeks, “Dynamite” remains on the chart’s top tier, at No. 2, in its third week.

From his first listen to “Dynamite,” Alex Waters, host of the afternoon radio show “Waters On Air” on American FM station WVHT in Norfolk, Virginia, said he knew this was the sound of BTS trying to finally achieve mainstream American success.

“I’m certainly familiar with some of their other singles, but compared to the rest of a contemporary commercial hits radio playlist, they always had this ‘novelty’ factor because of their use of the Korean language,” Waters told Yonhap News Agency via email.

“Dynamite” is BTS’ first song sung entirely in English. The Korean septet has produced music primarily in Korean even after its global breakout.

Waters added, “Singing in Korean, or any other language besides English, isn’t a bad thing. But it makes it hard for the average listener to understand what’s going on with the song. And broadcast media, by its definition, serves the average listener.”

Amid an absence of other big releases during the week, the radio host said he had a “strong feeling” that “Dynamite” would hit No. 1 on the Billboard Hot 100. “Staying there for a second week was more surprising and impressive.”

He noticed BTS this time was seemingly moving out of its comfort zone — appeasing its dedicated fan base known as ARMY — and was trying to appeal more to radio DJs-hosts, who act as gatekeepers toward the US radio airwaves.

“To hear all-English lyrics in “Dynamite” meant that they were prepared to play the American radio game by its rules. Really, I almost think this was a song for us, the programmers and personalities,” Waters evaluated.

“It was BTS saying that they can have success here if they want it, but that they knew they’d have to change a little,” said Waters, assessing that the group’s fans in the US this time around probably did not need to work as hard as in the past in terms of making song requests at radio stations for greater exposure.

Waters recalled playing the song roughly around 10 to 15 times in the first week and later adding “Dynamite” to the station’s “Power New” category playlist, which allows spins of about 50 per week.

According to Waters, the Billboard Hot 100 win of “Dynamite” signals a victory for the average music consumer, as much as for BTS, as it has effectively removed a tall barrier between the biggest boy band in the world and potential new fans. “It’s an important win for BTS, but they didn’t hit No. 1 with a K-pop song — they reached No 1 with a pop song.”

For BTS, the element of language, however, could play out differently across different US regions, depending on the demographics.

“Other stations in other areas probably feel differently about that, but I think ‘Dynamite’ would still have the success it has now if it was partly in Korean as well,” evening radio host Alexander Reid, aka “Big Reid,” at 99.7 NOW in San Francisco told Yonhap News Agency.

Reid added, “Every station is different. 99.7 NOW is in the (San Francisco) Bay area, a melting pot for all cultures, so we had no hesitation in supporting BTS.” The DJ said he has been playing the song hourly from 7 p.m. to 12 a.m. daily.

The radio host saw BTS having the chance to potentially win another Hot 100, even with a Korean-language track.

“Anything is possible and I definitely think it’s going to happen again. The world is changing and becoming more accepting of everyone little by little. I love to see it,” said Reid.

On the back end of things, Columbia Records, which promotes “Dynamite” in the US, is also credited as having done an excellent job in terms of PR and marketing, especially during a time when the COVID-19 pandemic has weighed down on the global entertainment industry at large.

“Columbia made it clear that this song was a priority, and that adding it to our playlist was going to be important,” said Waters.

“With ‘Dynamite,’ they booked BTS for every possible promotional opportunity, and with all that content pushed out to the public, it’s no wonder that this is their biggest song yet,” the radio host assessed.

Reid agreed that Columbia well understood what it took to prioritize and push through a song during the COVID-19 pandemic.

“Everyday things are changing, and I feel like they’ve been pretty active in making sure things work. I received a bunch of BTS content from them at the time of the launch that helped,” the host said. (Yonhap)