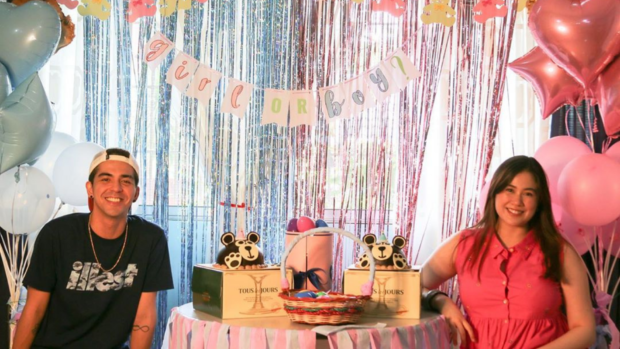 Mark Herras and Nicole Donesa revealed that they will soon be welcoming a baby boy together.

The couple learned their child’s gender in an intimate gathering with their loved ones, as seen on their vlog on YouTube on Sept. 17.

Herras also explained that they chose to keep their celebrations small due to the ongoing COVID-19 pandemic.

While other soon-to-be parents usually pop balloons for gender-reveal parties, Herras and Donesa chose to use plastic eggs instead. Donesa noted that she got the idea from her cousin who recently gave birth to a baby girl.

When the reveal began, the couple and their loved ones took turns opening different colored plastic eggs that contained pieces of paper. Donesa said that one of the eggs would have something that would reveal their baby’s gender.

After opening a couple of eggs, Donesa found a slip that said, “Finally a baby bear, Mark Herras has an heir.” This prompted her to think that they are having a son.

However, it still remained unclear for the others even after she read that piece of paper. Suddenly, one of their loved ones handed Herras a large plastic egg that contained an envelope on top of pieces of paper.

When he opened the envelope, Herras saw sonograms of their child and immediately stood up to hug Donesa. The two then pulled out the pieces of paper in the large egg and found two baby shoes with a blue moon on them.

After holding the shoes, their family cheered “Baby boy” as Donesa squealed in excitement. The future mom also found a piece of paper in the shape of a shirt that said “Baby Boy Herras.”

The couple announced that they were expecting their first child on Sept. 13 through a vlog. Donesa is currently five months pregnant.

Herras and Donesa got engaged last June, almost a year after they confirmed they were in a relationship in August 2019. As for their wedding, the two admitted that they are facing difficulties in arranging it due to the pandemic.  /ra