‘The Eye’ actress on the comeback trail

Sinje Lee turns her gaze to the harrowing atrocities of war in ‘The Garden of Evening Mists’
By: Rito P. Asilo - Entertainment Editor
Philippine Daily Inquirer / 12:40 AM September 11, 2020 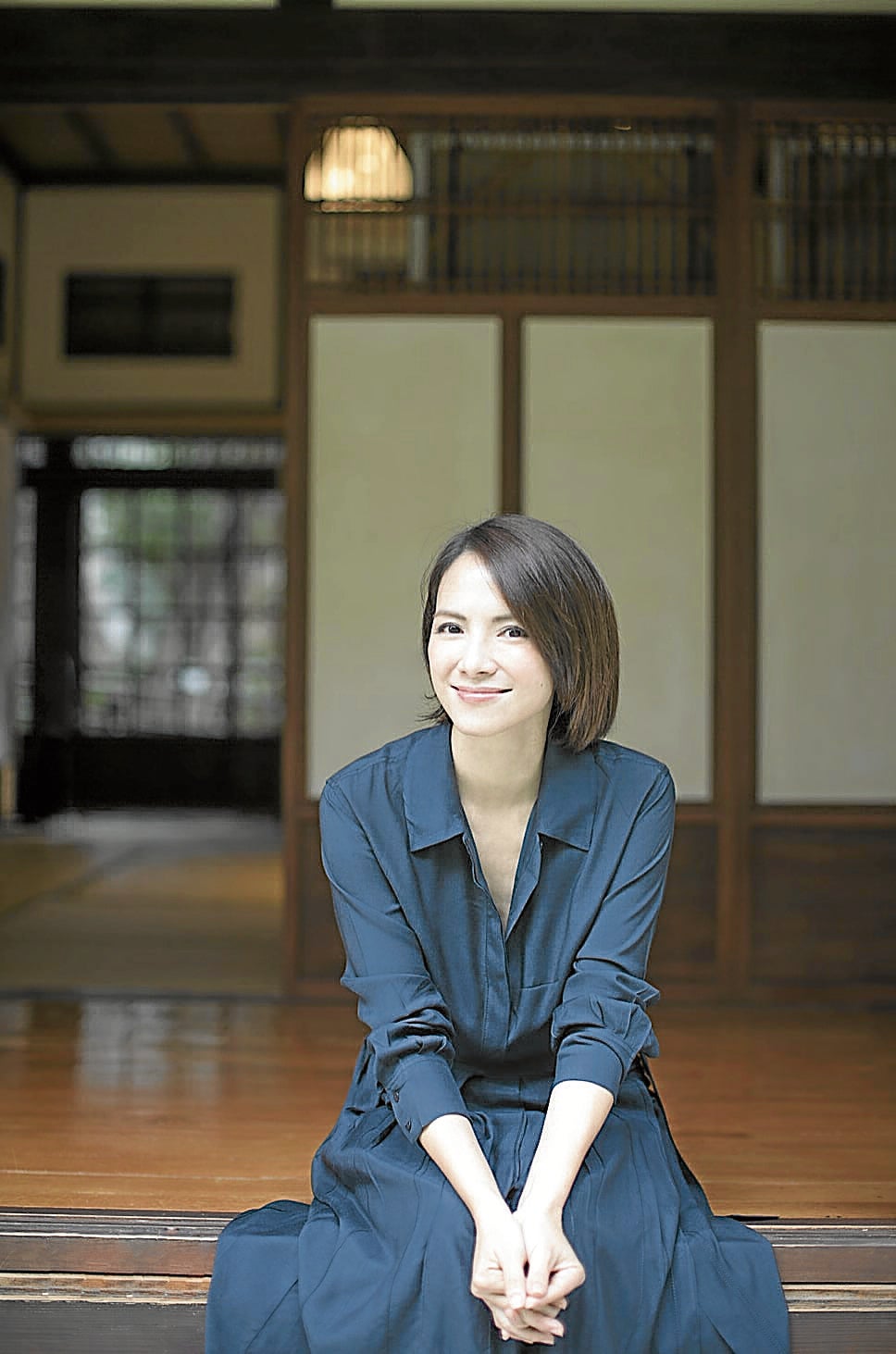 Sinje Lee may not have worked for four years before deciding to return to acting in HBO Asia and Astro Shaw’s critically acclaimed movie “The Garden of Evening Mists,” but it’s hard to forget what the actress has managed to accomplish on the world-cine­ma stage.

Sinje, also known as Ange­lica Lee Sin-je, remained in the spotlight even when she wasn’t as busy with shoots, thanks to her tabloid-fodder marriage to controversial Hong Kong director Oxide Pang (“Bangkok Dangerous”), who was dragged into a scandal when his affair with a model-actress came to light. Sinje has since reportedly forgiven her remorseful hubby.

The actress, who has one of the loveliest faces in Asian cinema, hardly appeared “wea­ther-beaten” by controversies when we spoke to her in a vi­deo interview arranged by HBO Asia and WarnerMedia last week to discuss the film, which premieres on HBO and HBO Go at 10 p.m. on Sunday.

Sinje’s luminous beauty was a pretty exterior made more alluring by a charismatic presence that reminded us so much of Julia Roberts’ movie-star appeal. Yes, her hearty laughter, which wafted through the rain-soaked air like grace notes embellishing almost every answer she gave, was as catchy as her potent portrayal as protagonist Teo Yun Ling in “The Garden of Evening Mists.” 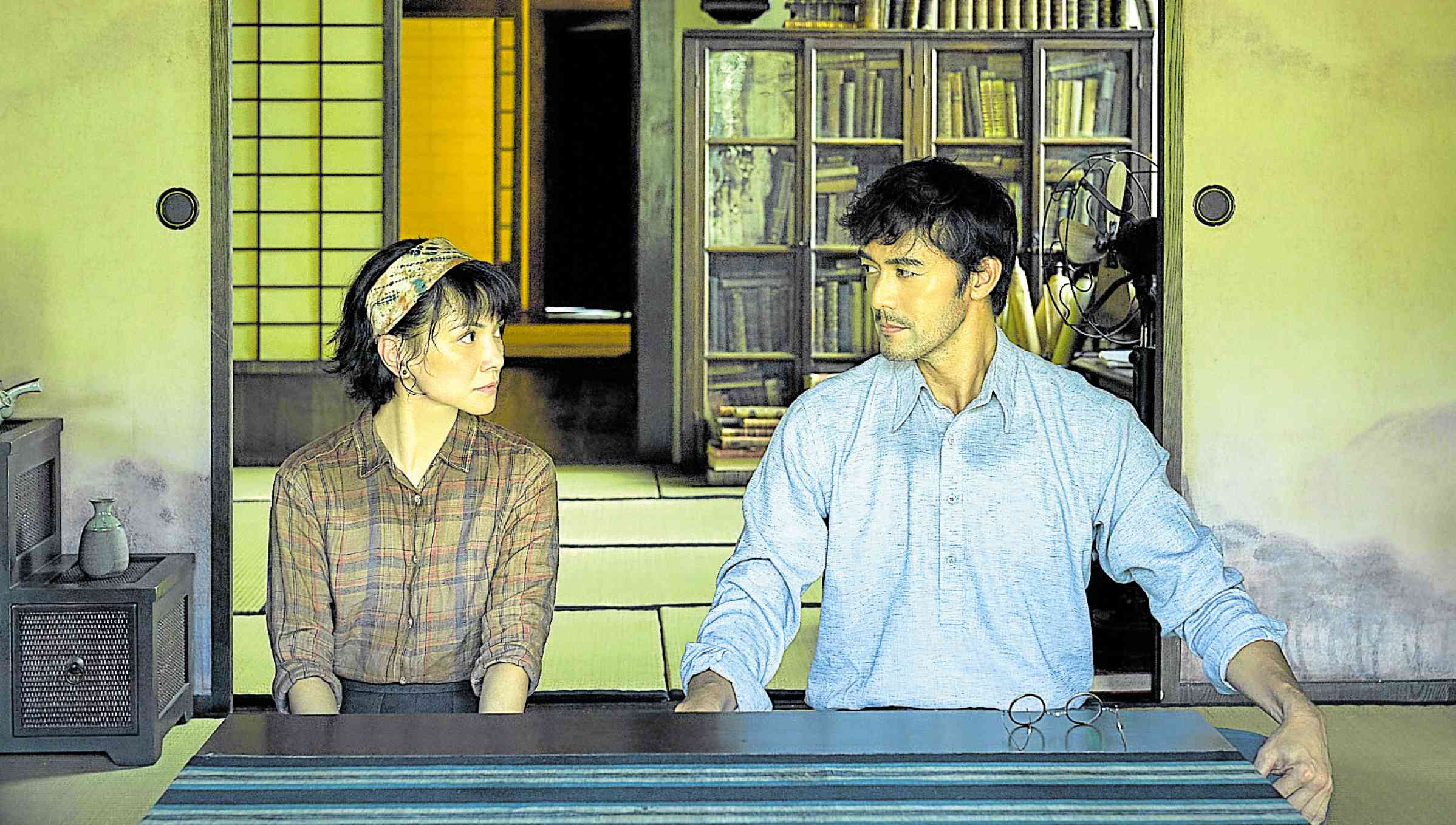 It is based on Tan Twan Eng’s Man Asian Literary Prize-winning novel about Yun Ling (Sinje), a prisoner of the Japanese in Malaya during World War II who later becomes a judge (Sylvia) overseeing cases of war crimes.

Shortly after the war, Yun Ling seeks solace in the rolling hills and tea plantations of Malaysia’s Cameron Highlands, where she comes to terms with her grief and survivor guilt. It is in this gorgeous backdrop where Yun Ling learns to build a “yugiri” (Japanese garden) to honor a promise she made to her younger sister Yun Hong (Serene Lim), who perished in the labor camp.

As the film takes a closer look at the atrocities of war and the plight of comfort women in the Southeast Asian region, Yun Ling finds herself embarking on a forbidden love affair with Aritomo that soon unravels secrets that change the course of her life forever. And it’s exactly the kind of thespic challenge that Sinje was waiting for to end her four-year hiatus as an actress.

“The novel is well-known for its powerful story and themes, so I expect people familiar with it to compare me to the Yun Ling they imagine from the book,” Sinje admitted. “That, other than the fact that it’s my first English-speaking role, presented a lot of pressure for me. Delivering lines in English was a big challenge but, at the same time, I saw it as a great opportunity to convince moviegoers that I can do an Eng­lish film.

“This production team was full of love, so I only have nothing but the happiest memories from this episode in my acting career. I was also very happy to be surrounded by nature—Cameron is so beautiful! I would wake up each day and say, ‘Wow, I hope I can stay here forever (laughs)!’

“To be honest, I wasn’t sure I could pull this off because of the very heavy emotions I was required to express. When our director Tom (Lin Shu-yu) told me what he wan­ted to see in a particular scene with Abe, all I could do was promise him that I’d try my best. 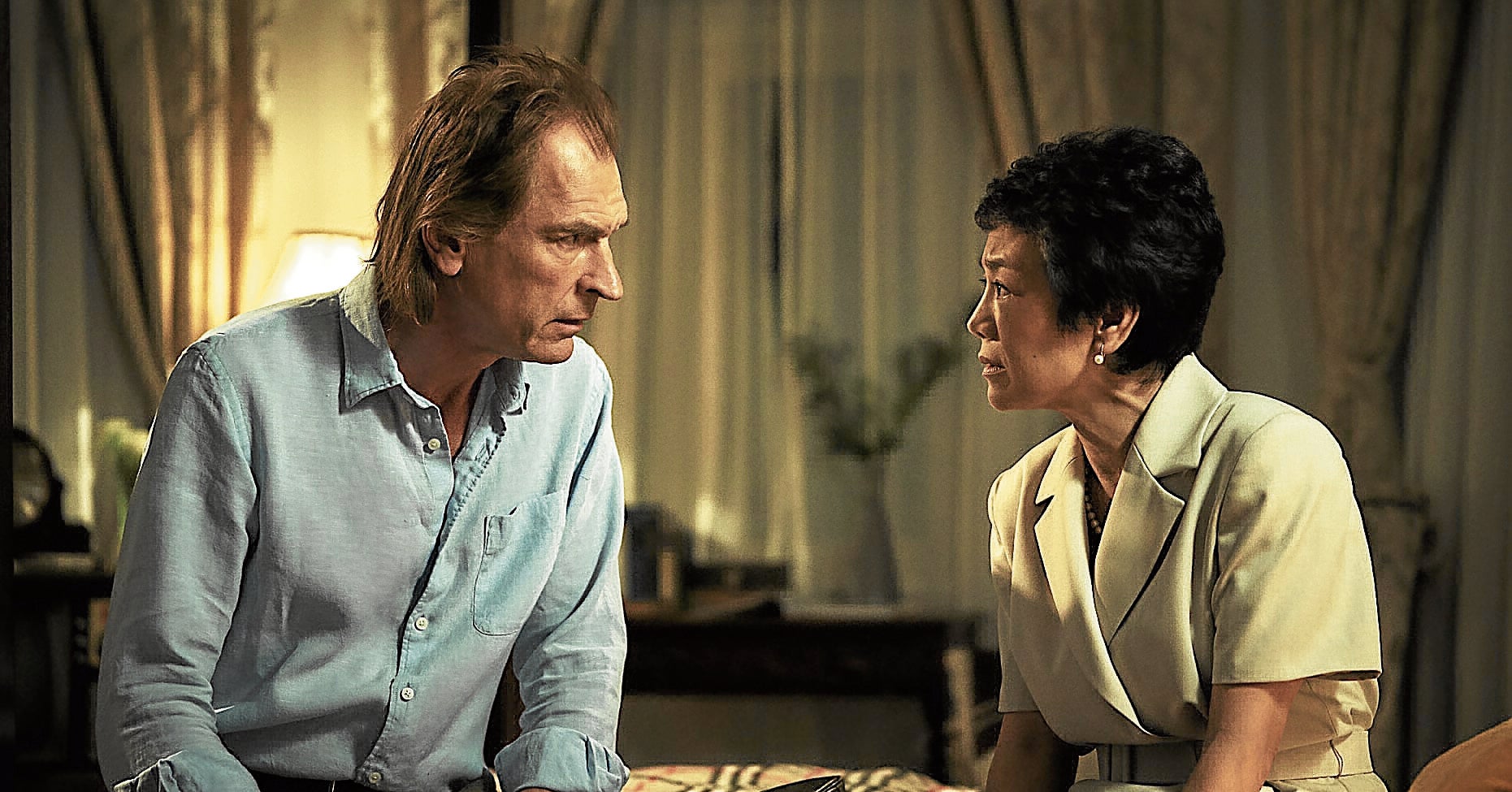 “I was so focused for the shoot that night that I didn’t talk to anybody on the set during the day because I really wanted to immerse myself in Yun Ling’s feelings. And it was amazing! I’ve never felt anything like it before. The emotions just flowed—and it left a huge impact on me as an actress.”

Perhaps it also served Sinje and her characterization well that the actress tapped to portray the older Yun Ling was someone she looked up to—her mentor-discoverer Sylvia Chang. Sinje laughed out loud when we told her how in sync her immersive performance was with Sylvia’s sturdy, spot-on turn.

“People ask us about the kind of preparation we did for our shared character,” she beamed. “But honestly, we didn’t really discuss our respective acting styles. The director did ask me to record myself delivering Sylvia’s parts because she needed to practice my Malaysian British accent (laughs)! Then, Tom sent her footage of me in my scenes with Abe.

“The audience thinks we’re so alike. But I think we owe our similarities not only to the preparation we did for the role, but also because we’ve known each other for more than 20 years now.

“In fact, Sylvia was the one who discovered me in Malaysia when I was in my senior year in high school. That’s how close we are. So, when friends watch the movie and tell me that I talk or smile like Sylvia, I tell them we’ve been preparing for more than 20 years (laughs)!”

The Kuala Lumpur-based actress does take her work seriously. Before she accepted the offer from Astro Shaw, she read the script first before taking another month to dive into the novel. Thereafter, she began writing down portions of the book she didn’t find in the script that moved her. “I did a lot of homework before I met director Tom, for whom I prepared 100 questions to discuss (laughs),” she recalled. “I suggested content I wanted to be incorpora­ted into the script.” 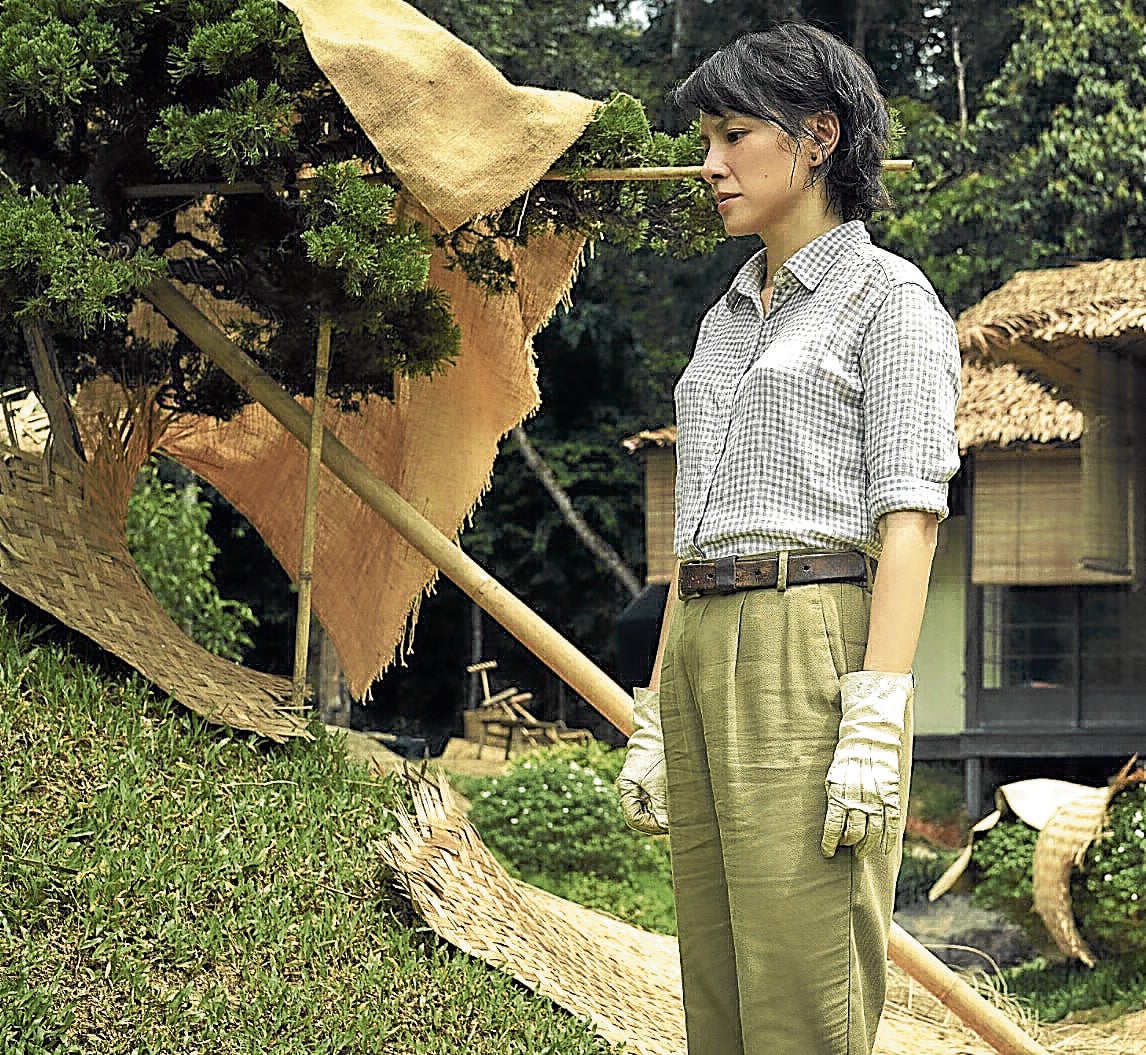 The challenge may have been daunting, but Sinje was ready to get “down and dirty” with shaping her character—especially where her favorite scenes were concerned: “One of the film’s most moving moments for me was when Aritomo took Yun Ling to the hill and asked her to open up about her traumatic past. It was very touching because it felt like Aritomo was there to help lift some of the weight off Yun Ling’s shoulder. I felt his deep love.”

The movie didn’t just open Sinje’s eyes about the joys of growing a garden (“My affection for Yun Ling has turned me to gardening, especially after the movie was released in Malaysia in January-February—I now have a small yugiri at home”), it also deepened her commitment to her advocacies.

“The movie is a new beginning for me as an actress, but I will only accept projects that touch me from here on. There’s a new movie on the horizon, but I can’t talk about it just yet. One thing that continues to keep me busy is running my own charity (Little Yellow Flower Education Foundation), which has been helping underprivileged children for 10 years already.

“So, during MCO (movement control order, KL’s version of the enhanced community quarantine), we raised funds, purchased PPE (personal protective equipment) for hospitals, and served food for more than 100 families. I was able to raise more than 500,000 Malaysian ringgit (approximately P5.8 million) to help people in need.

“As far as my personal endeavors are concerned, I paint in my downtime. I was supposed to have my own exhibit later this year, but we had to move it next year because of the MCO. The period of isolation hasn’t really been a problem for me because I’ve been practicing meditation for more than 10 years now.

“So, every year, I attend a meditation camp, where cell phones and computers aren’t allowed, and isolate myself for seven to 10 days. So, I treat MCO as just another trip to meditation camp—a special time that allows me to take care of my family and do away with the complicated things in life.”