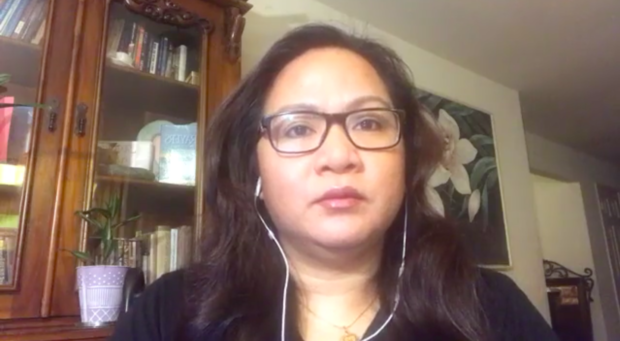 Sarah Balabagan has claimed that broadcast journalist Arnold Clavio is the father of her firstborn, after a post involving them circulated online recently.

Balabagan addressed the rumors surrounding the identity of her first child’s father through a livestream on her Facebook page last Friday, Aug. 21.

She explained that she finally decided to reveal the person’s identity after 22 years to set the record straight and to ensure that her children know the truth. Her eldest child is now 21 years old.

My response to Arnold Clavio Issue. And If you have questions , you can join me at my radio program #SariSarah every Tuesday 7pm pacific time or Wednesday 10am pinas time @ #PHLVRADIO. Thank you all for your prayers, love & support. God bless you all! With Jun Santiago Sereno

Prior to claiming that Clavio is the father of her first child, people have previously speculated the late ambassador Roy Señeres, industrialist William Gatchalian or broadcast journalist Rey Langit to be the father of Balabagan’s firstborn. She however quickly shut down those rumors.

Balabagan then stated that it was the late former ambassador who helped her when she first became pregnant.

(The ambassador took me in and hid me but what is sad is that others have said that he is the father [of my child].)

Balabagan then recalled that she first met Clavio when he visited her while she was imprisoned in the United Arab Emirates for murder. Balabagan had killed her employer after he tried to rape her when she was 14 years old. Her death sentence was eventually reduced to imprisonment and caning, after international outcry about her case.

She eventually became close to Clavio, whom she called “Kuya Arnold” at the time. Balabagan also noted that Clavio exclusively covered her story when she returned to the Philippines in August 1991.

Following her return, the two developed a relationship which they agreed to keep hidden.

(Arnold told me before that there would be no confessing. Whatever happens, he said that I should not confess.)

Though Balabagan was only 17 years old at the time, and therefore a minor, she said she has already forgiven Clavio for their affair and moved on from it. She also clarified that she did not decide to reveal Clavio’s identity for revenge, but to simply put the rumors to rest.