How to float all the way to the top 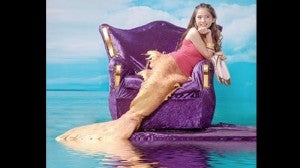 ELLA Cruz as “Aryana,” a modern mermaid: She played support roles all her life before this.

Ella Cruz, a young actress recently tapped by ABS-CBN to play the teenage mermaid Aryana, trained with a swimming instructor to prepare for the role.

“It wasn’t easy,” Ella told Inquirer. “In the beginning I would suffer from cramps!  We would swim in a pool that was 10-feet deep, but I was in the company of another actress, Michelle Vito—that made me more confident.”

The 15-year-old added: “Soon enough, we were wearing our tails. It was hard to learn how mermaids supposedly swim. You have to be very graceful or you won’t look good on TV.”

Ella said Aryana was “different” from most mermaids in literature. “Aryana was born human, but a vindictive mermaid cursed her, saying she would grow a fish tail when she turned 14,” the young star related. “That’s when Aryana’s magical tale begins. Aryana is very modern. She has a social life. She even has a mobile phone—she’s actually a techie!”

Ella says four other teen actresses auditioned for the role. “One day, I was told to go to the office of Charo Santos-Concio (ABS-CBN president). I had no idea why. I only heard from the bosses gathered there that they would first cast me as a young Cristine (Reyes in ‘Dahil sa Pag-ibig’) to see if I could handle my own show.”

Ella suspected that her performance in “Dahil sa Pag-ibig” got good feedback because, shortly after, she was told to take swimming lessons. “I’ve been in this business for six years, playing supporting role to a lot of actresses. I’m so thankful for this; it’s a dream come true for me.”

Ella added that the most challenging part of her six-year journey in the biz was auditioning for roles and getting rejected. “After every rejection, my mother would tell me that maybe it wasn’t my time yet, that I just had to be patient,” said Ella, who at this point, broke into tears. “I’ve been a bit player all my life. I’ve waited for something like ‘Aryana’ for a very long time.”

Gabriela Annejane U. Cruz is an incoming senior high school student. She finished her junior year at the Colegio de Sta. Monica in Angat, Bulacan. She is the second of four children.

Ella’s first taste of show biz was in 2004, via “Little Miss Philippines,” a talent-search segment in the game show “Eat… Bulaga!” Though she didn’t win, she ended up in a number of shows on GMA 7. She played the young version of characters portrayed by Angel Locsin in “Majika,” Nadine Samonte in “Super Twins,” and Marian Rivera in “Marimar.”

Tale of the deep

Ella was also seen in “Inday Wanda” on TV 5 and “Tropang Potchi” on QTV 11. After signing up with ABS-CBN, Ella appeared in “Goin’ Bulilit,” “Wansapanataym” and “Dahil sa Pag-ibig.” In 2008, she won the award for best child actress from the Filipino Academy of Movie Arts and Sciences (Famas), for her work in the movie “Resiklo.”

In “Aryana,” Ella teams up with young actor Paul Salas. “I hope viewers will appreciate our onscreen partnership. I’m sure even adults will be able to relate. In the series, my character 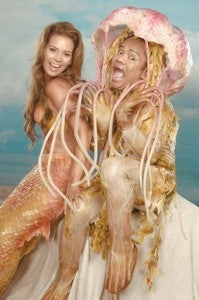 DESIREE del Valle and Chokoleit are in the support cast.

merely thinks of Paul as her best friend. Aryana has no idea that he feels more than that for her.”

Ella made it clear that having a boyfriend was far from her mind at the moment. “My focus right now are my studies and ‘Aryana’; saka na ’yang love. I know there’s a time for everything, just like I know that the time for me to shine as an actress has arrived,” she stressed. “I still have a lot of plans for my family.

I want us to have a house in the city. It’s hard to travel to and from Bulacan, where we live, especially now that I’m working on this teleserye. I also want to save up for a car of my own.”