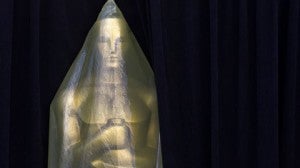 Covered in plastic, an Oscar statue peeks out from a curtain on the red carpet during preparations for the 84th Academy Awards, which will be held in Los Angeles on Sunday, Feb. 26, 2012 (Monday in Manila). Every year, everyone in the movie industry who takes the craft seriously strive to snag this 8.5-lb Oscar statuette of 93-percent tin plated with 24-karat gold. AP PHOTO/AMY SANCETTA

Kodak pulled out weeks before this year’s Academy Awards show in February, and talks have been ongoing to find a new backer for the venue, next to the iconic Grauman’s Chinese Theatre on Hollywood Boulevard.

Britain-founded, California-based audio technology pioneer Dolby announced a deal with the CIM Group, which owns the Hollywood & Highland Center of which the Oscars venue is part, to put its name on the theater for the next 20 years.

“Dolby is a brand recognized around the world for creating the best, most life-like entertainment sound experiences in any environment,” said Dolby Laboratories chief Kevin Yeaman.

“This partnership with CIM allows the Dolby Theater to be not only the world stage for the Academy Awards, but for Dolby innovations for decades to come,” he added.

Dolby said it would use the deal to showcase its latest Dolby Atmos sound system, which it described as “a break-through audio technology that delivers the most natural, life-like sensory experience,” in the 3,400-seat theater.

The accord was welcomed by the Academy of Motion Picture Arts and Sciences (AMPAS), which organizes Hollywood’s top annual awards show.

“The Academy’s Board of Governors believes that the home for our awards is in Hollywood. It is where the Academy and the motion picture industry are rooted,” said AMPAS head Tom Sherak.

“We are pleased to have a new agreement with CIM that will continue our longstanding partnership,” he added.

CIM Group co-founder Shaul Kuba added: “Dolby Laboratories has a long history in Hollywood and has made significant contributions to the entertainment industry.

“It is a respected international brand and technology innovator. We are proud to welcome them as our partner on the Dolby Theater at Hollywood & Highland Center,” he said.

A bankruptcy court in February approved Kodak’s request to cancel its contract with the until-then Kodak Theatre, ruling that it was “in the best interests of the debtors, their estates, their creditors and other parties.”

The contract between Eastman Kodak and theater owner CIM was valued at $72 million — $3.6 million per year for 20 years.

The theater, inaugurated in November 2001 with seating for 3,332, has hosted the Academy Awards since 2002.

Kodak, an iconic American firm that introduced generations of consumers to mass-market cameras, filed for bankruptcy in January.