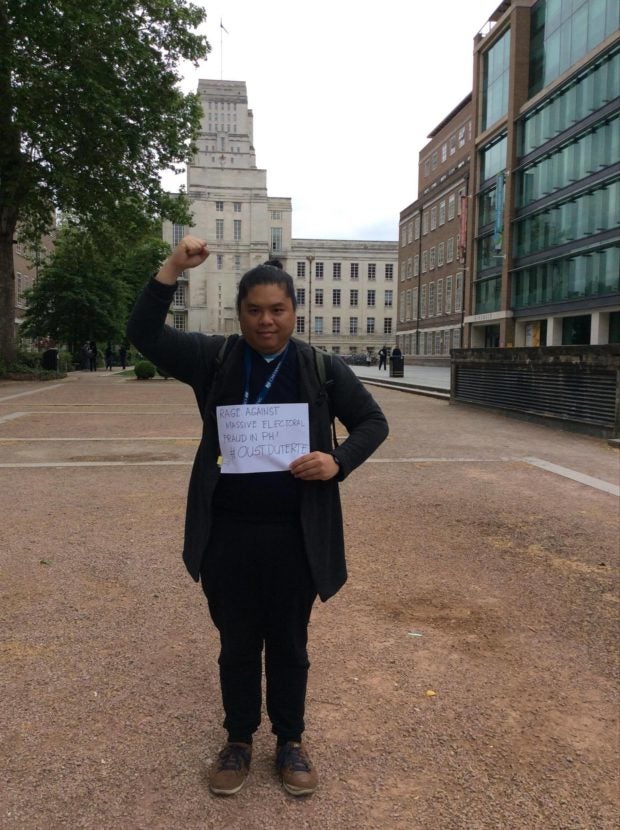 In his London flat, Rogelio Braga was busy typing on his laptop, in between answering emails, queries, and interviews from his caseworker. Rogelio was writing a play entitled Miss Philippines. No, it is not about statuesque beauties whose feet barely touched the earth. It is about real women, lesbian, and transgender women, barely surviving the life in the slums under Duterte’s war on drugs.

It is the same play he submitted to the Yellow Earth Theater earlier in 2020 and has been awarded £2000 seed commissions to develop new plays as part of the Professional Writers Programme 2020-22.

Rogelio is the first Filipino to ever receive the award since the program was launched in 2017. He is also the first Filipino writer seeking asylum in the United Kingdom due to threats of extra-judicial killing in the Philippines under the Duterte regime.

Rogelio is among the four chosen playwrights including Lao Lee, Nemo Martin, and Marie Yan as part of the Professional Writers Programme 2020-22. They will be under the mentorship of director and dramaturg Ng Choon Ping. The seed commission will also include one-to-one dramaturgy meetings and development workshops with actors and directors over two years. They were selected out of 17 writers participating in Phase 1 of the Programme, according to the Yellow Earth Theater website. One of their objectives is more representation of BESEA in the UK’s theatre industry.

“This is an opportunity to amplify the voices of the dispossessed and of the powerless and in so doing bring awareness and education to UK audiences. I hope it inspires other writers who find themselves in similar situations to Rogelio to take courage and keep writing and for venues and organizations to listen and support,” Kumiko Mendl, Yellow Earth Theater artistic director says.
Mendl explains that plays can be hugely powerful because they can provoke, challenge, shock, and have the power to move hearts and minds.

“When we read his ideas for his play Miss Philippines we were immediately alerted to the power and importance of this story, the pain and suffering he was sharing through his characters but also the incredibly vibrant and rich world they inhabited. These are the voices of women that have not been heard in this country and we felt strongly this story needs to be told,” Kumiko says.

Miss Philippines is Rogelio’s first work for the stage written entirely in English. 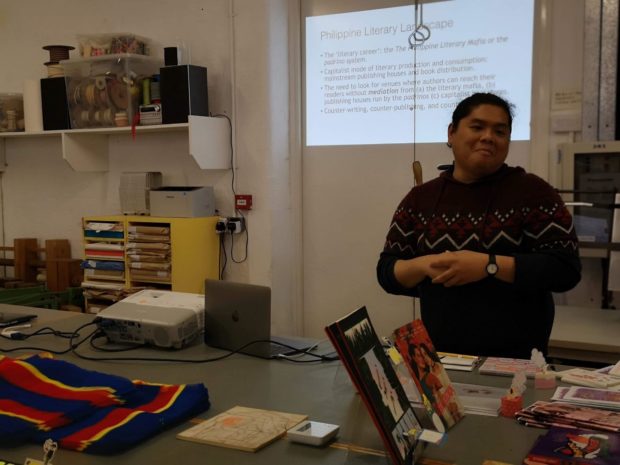 Rogelio Braga during a lecture on Philippine Literary Landscape with the Filipino migrants in London. He is the first Filipino writer seeking asylum in the UK under the Duterte regime.

“I wrote this for British audiences. I wrote plays thinking of a specific audience; I always look at theatre performances as a communal enterprise, the production, and consumptions of meanings is always communal,” Rogelio says to Inquirer.net via video call.

He also plans to adapt Miss Philippines for Filipino audiences in the future.

Rogelio is also known for his novel ‘Colon’ published by Balangiga Press in 2016. Colon is a historical fiction about the war in Mindanao. The protagonist is a woman named Blesilda. Her life was intertwined with the war in Mindanao between the Moro people and the Philippine Government during the Martial Law and beyond.

“Rogelio’s passion for his craft and his commitment to telling stories of the people he knows and the country he loves and the lengths he has gone to be able to continue to do that is truly humbling,” Kumiko says.

Despite the seriousness of his plays, Rogelio brings forth from each of them humanity, warmth, and humour, Kumiko says.

His controversial play, Ang mga Maharlika performed by UP Repertory in September 2017 was supposed to be toured in several venues that year but the producers decided to cancel the shows due to intimidations and death threats to the actors and production staff from the supporters and loyalists of the Marcoses and Duterte. It was also banned on Facebook. The play was based on Dovie Beam’s biography written by Hermie Rotea, an exiled journalist. It was banned in the Philippines by former First Lady Imelda Marcos.

“I have death threats as early as 2017 but I just dismissed them as I considered it as part of the bargain if you go public as a writer and a playwright critical of the regime,” Rogelio explains.

Rogelio had a copy of the book but it was stolen in his drawers inside the Faculty of the School of Languages, Humanities, and Social Sciences at the Mapua University where he taught.

Later, the threats were just no longer online messages and phone calls from strangers, but also ‘visits’ in his apartment. His family and friends were also put in danger.

In September 2018, Rogelio came to the United Kingdom to pursue a postgraduate degree in Nationalism and Ethnic Conflict at Birkbeck, the University of London as a Chevening Scholar.

“I intend to stay here for ten months and then to return home to my work and research endeavors in Mindanao. I was unable to return since February last year. I left my small publishing house, a start-up theatre company, my books, house, my cats, and the various research endeavors and projects back in the Philippines,” Rogelio explains.

Rogelio finished his postgraduate program in 2019.

Despite being abroad, Rogelio’s family informed him of strangers asking for his whereabouts.

He has no option but to seek protection from the British government because his student visa was about to expire.

Before the lockdown, Rogelio was active in promoting his works among the migrant Filipino community and attending conferences.

In a lockdown, Rogelio stays in his small flat, writing and helping people in a similar situation.

“I volunteer for Campaign for Human Rights in the Philippines, a rights organization based here in London while being supported by Kanlungan Filipino Consortium,” Rogelio says.

“With what’s happening in the country now, attacks on human rights, attacks on press freedom and freedom of expression, the weaponization of the COVID-19 pandemic to silence the critics of the government and to totally dismantle our democratic institutions, I am not really sure now if the country is a safe space for writers and playwrights like me,” Rogelio explains.

The playwright and the motherland

“I no longer have a motherland. I am no different from the victims of extra-judicial killings in the archipelago; I’ve gone to the same process of this regime of systematically dehumanizing a Filipino body: first, the regime would strip you of your human rights such as to live, to free speech and expression, then this process would automatically reduce you to a bare body breathing, moving, weightless, without citizenship,” Rogelio says.

Rogelio denounces the supporters of President Duterte over their public approval of the killings.

The Duterte regime and its supporters made them first stateless people in this ‘War on Drugs’ before they were summarily executed, he says.

“The only difference is that I was fortunate enough to leave,” Rogelio says. “My country now is the stories I will tell, the stage I’ll create, and the dreams that I want to fulfill—and this could be anywhere perpetually suspended in a language that I am free to express. A country that could kill a Filipino is not my country. My countrymen? Those who love me and could protect me from harm.”

Despite his status in the United Kingdom, Rogelio continues his resistance through his various articles.