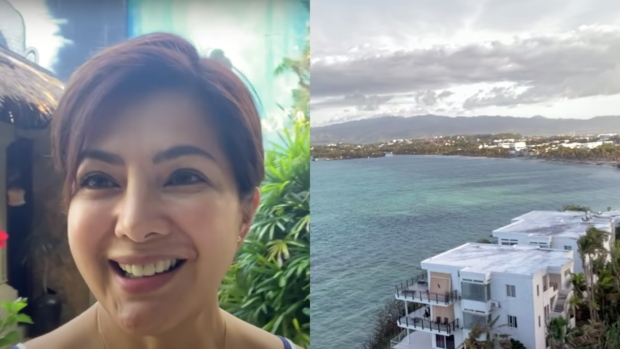 Alice Dixson and the view from her Boracay home. Images: screengrab from YouTube/Alice Dixson

Alice Dixson treated her fans to a virtual tour around her Boracay home through a vlog post last Saturday, Aug. 1.

While she admitted to being reluctant to the idea before, the actress finally decided to give a tour of her home since her viewers have been requesting it for “a few years now.”

Dixson also noted that she splits her time between Boracay and Manila, as seen in the video on her YouTube page.

She first showed the garage, which also serves as the receiving area, with a white van parked inside it. However, Dixson pointed out that she does not use cars on the island often.  She instead uses a motorbike, citing that it is how the locals get around the island.

After the garage, Dixson gave a quick look at the pool area, noting that it always receives “morning to noon sun.”

Upon entering the house’s interior, a small hallway leads to the kitchen. Though Dixson did not bring her pet dog Blondie to the island home over the weekend, she said that her pet usually stays in the kitchen on a dog bed or in the master’s bedroom.

The actress then showed her favorite spot: the guest bedroom. Dixson described it as the most serene, calm and quiet spot there.

While giving a look at the view from her balcony, Dixson mentioned that it is one of the best views of the island. From her home, she can see the island of Aklan, where Caticlan airport is located.

Dixson later pointed out that she can hear the sound of waves from her balcony at night. She also enjoyed a drink with a man who she referred to as her bartender.

The actress has been low-key with her love life. Dixson currently has a boyfriend whom she refers to as “GS” on social media. However, it is unclear if the man in the vlog post is her partner.

The last room Dixson showed was the master’s bedroom, which she says is designed in a “modern island style.” Along with what seems to be a queen-sized bed, it also contains brown chairs, a couch and a TV.

Meanwhile, the master’s bathroom has two separate stalls. One had a urinal while the other covered a shower area. Two closets with mirrored doors also lined parts of two opposite walls.

After showing off her home’s interior, Dixson gave a glimpse of their “access point” to “one of [their] secret hideaway beaches.” Upon arriving at the secluded shore, Dixson used a stick to write the phrase “I love u!” in the sand before the vlog ended. NVG