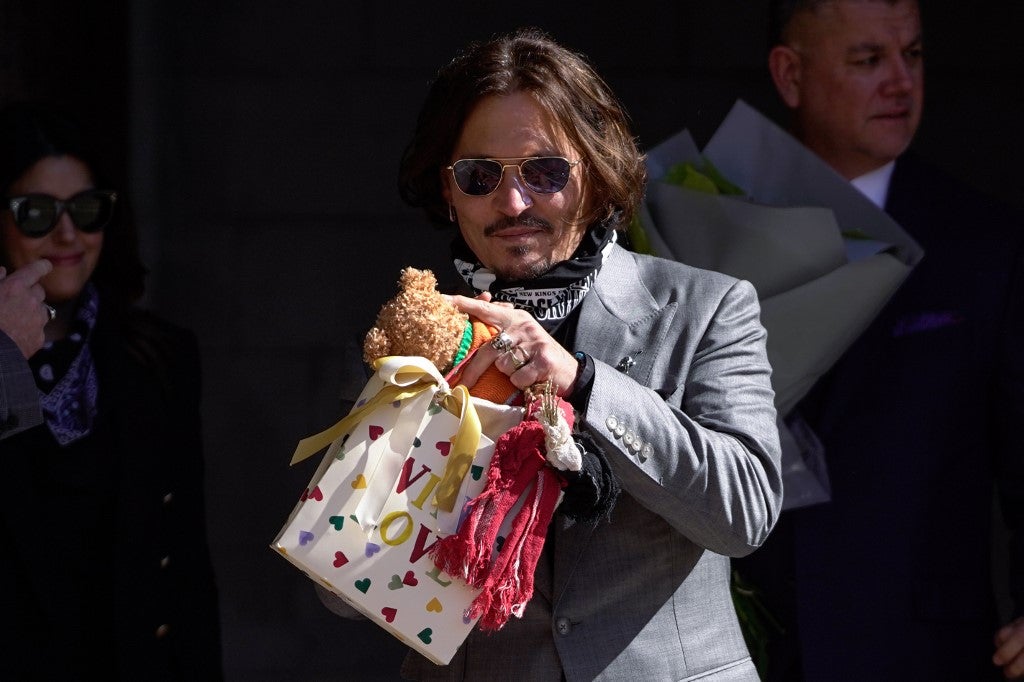 US actor Johnny Depp arrives to attend the final day of his libel trial against News Group Newspapers (NGN), at the High Court in London, on July 28, 2020. (Photo by Niklas HALLE’N / AFP)

Johnny Depp grabbed a teddy bear from a fan and waved to a crush of supporters Tuesday as he entered London’s High Court for the final day of his three-week libel trial against Britain’s The Sun tabloid over allegations he beat ex-wife Amber Heard.

The “Pirates of the Caribbean” franchise hero was mobbed by fans chanting “Justice for Johnny” and trying to pass bouquets of flowers to the Hollywood star.

Heard made a low-key entrance through a side door.

Depp rejects accusations of repeatedly hurting the 34-year-old actress over a three-year span that ended with Heard’s 2016 decision to get a restraining order and file for divorce.

The Sun’s legal team called Depp a “Jekyll and Hyde” character who was “controlling and physically abusive towards Ms Heard” — especially when he was on drugs.

But Depp’s attorney David Sherborne — whose celebrity list of clients has included Mick Jagger and Hugh Grant — said The Sun’s defense was pointless because the Hollywood star never denied struggling with addiction.

“It would be easy to lose focus on precisely why we are all here,” Sherborne said in his closing statement.

“We are all here because the newspaper and (executive editor Dan) Wootton chose to publish this extremely serious allegation, an allegation which Mr Depp says — and has always said — is completely untrue.”

Judge Andrew Nicol is expected to take some days poring over 12 bulging volumes of evidence submitted in a case born at the hight of the #MeToo movement.

– ‘The damage is done’ –
Some legal experts say Depp’s reputation will have trouble recovering even if The Sun is forced to retract its claim.

“I think the damage is done,” said London PR agent and crisis consultant Mark Borkowski. “Even if he wins, it’s going to be a Pyrrhic victory.”

The odds favour Depp because England’s strict libel laws put the burden of proof on the media.

That puts one of Britain’s most popular newspapers in danger of having to cover huge court expenses and pay damages in the middle of a media industry crisis made even worse by the coronavirus pandemic.

“If The Sun wins, Heard will likely be viewed as a brave crusader in the domestic violence and #MeToo arena,” said defamation case lawyer Emily Cox.

“If The Sun loses, Heard could well find herself ostracised by those movements and by Hollywood.”

The trial kicked off with three days of grueling cross-examination in which Depp admitted only hazily recalling some episodes because he was high and drunk.

Depp revealed at one stage that he started snorting cocaine to kick his addiction to prescription painkillers.

He argued that he was suffering “uncontrollable spasms” during withdrawal and was in “no physical condition” to hurt Heard in one alleged incident.

The Sun’s lawyers also produced a statement from Depp’s doctor concluding that the actor “romanticizes the drug culture” and was only going through rehab for show.

“We are a crime scene waiting to happen,” Depp told Heard after one fight.

But he also portrayed his wife as a manic aggressor who was making up the allegations for money and personal fame.

Depp said Heard’s claims turned him “from Cinderella to Quasimodo in 0.6 seconds”.

Heard countered that Depp’s drug habit made him an unrecognizable “monster” who would go on days-long binges in which he lost control.

She accused him of throwing bottles at her “like grenades” and striking her in the face with a phone.

“Some incidents were so severe that I was afraid he was going to kill me, either intentionally or just by losing control and going too far,” she said in a witness statement.

Yet both Heard and Depp acknowledged loving each other deeply on their good days.

“We had had a wonderful year together where he was sober,” she said. “I loved him and I didn’t want to lose that.”

Depp conceded that Heard did her best trying to get him off drugs in 2014.

“She does have a heart and she understands the pain I was experiencing,” he told the court.