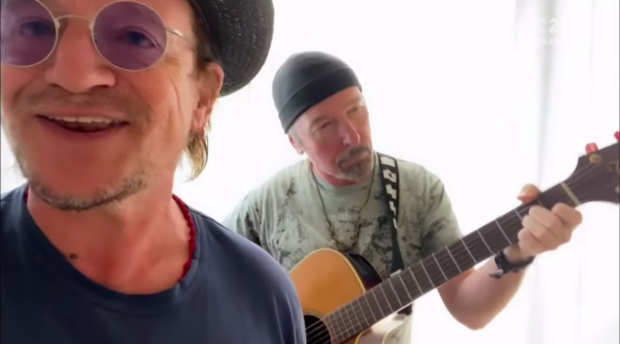 U2’s Bono and The Edge performed an acoustic rendition of Led Zeppelin’s hit song “Stairway to Heaven” to honor the crew who have helped them on their tours.

The two joked that their Irish road crew would rather work for the English rock band than for U2, as seen in the clip they posted on Facebook last Sunday, July 26.

The pair also praised their team, stating that they are the “best in the world.” However, Bono pointed out that there is “one annoying aspect” of working with an Irish crew.

'We said we’d never play this…' This one's for the crew.#SongsFromAnEmptyRoom #stairwaytoheaven

“Wherever you go in the world, whatever venue you’re playing—whether it’s the Olympia or 3 Arena or Madison Square Garden—you walk into the venue and it’s a big moment, and you’ll hear a song that we said, ‘We’ll never, ever play this,’” Bono explained.

“And that’s right, ‘Stairway to Heaven,’” he added, as The Edge started to play the opening chords of the tune.

“These professionals believe they play this better than the band,” Bono said. “And you know, it might be true.”

Bono then begins belting out the song’s lyrics: “There’s a lady who’s sure / All that glitters is gold / And she’s buying a stairway to Heaven.”

As they end their short performance, the two agree that their Irish crew members can indeed play the tune better than the band. Bono and The Edge also performed the song as part of a TV event called “Songs from an Empty Room,” as per the band’s official page.

According to the event’s website, it aims to raise funds for members of the live event industry in Ireland by holding performances by Irish artists.

Along with supporting the initiative, Bono earlier released a new song in March to honor those affected by the COVID-19 pandemic. Titled “Let Your Love Be Known,” Bono also dedicated the poignant ballad for the frontlines braving the health crisis.  /ra

TAGS: Bono, Led Zeppelin, Stairway to Heaven, The Edge, U2