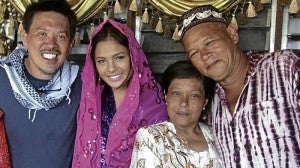 BRILLANTE Mendoza, Lovi Poe, Nora Aunor and Bembol Roco on the set of “Thy Womb” in Mindanao.photo courtesy of lovi poe

The heat on the set of the GMA 7 prime time soap “Legacy” was no big deal for actress Lovi Poe; she had just returned from a seaside set in the South.

If her chestnut tan had turned a tad deeper, that was thanks to a recent trip to Tawi-Tawi in Mindanao, to shoot “Thy Womb,” the latest film of Brillante Mendoza, who won in Cannes in 2010.

The weather down there was fine, said the first-time visitor to the island. “It was such a beautiful place,” she said. “Everyone was so nice to us.”

Despite their military escorts, Lovi and co-star Nora Aunor were mobbed by the residents as soon as they landed on the island, recounted a production insider.

The young actress said: “The fans said they always watched ‘Legacy.’ They were looking for Diana and Bernadette (characters played by Heart Evangelista and Alessandra de Rossi on the soap). I told them they were back in Manila, taping.”

She was thankful that the network allowed her to do Mendoza’s film. “I was given a week off,” Lovi said, adding that she wouldn’t have passed up the chance to work with La Aunor and Mendoza.

“I was star-struck,” she said, recalling her first meeting with Aunor. “But she made sure that we were all comfortable around her.”

On set, she was constantly in awe of Aunor’s acting, Lovi said. “You didn’t feel she was acting at all.”

The indie drama also stars Bembol Roco and Mercedes Cabral. “It was important for me to do this film,” said Lovi.

She had heard “amazing” things about the acclaimed director, but nothing compared to actually working with him, she said. “He has different techniques. It was a refreshing change for me. I finally found someone who works the same way that I do.”

She explained: “He told me not to over-read the script. Even in previous projects, I made sure not to read the script over and over so that I’d be spontaneous on the set.”

Back in Manila, she works in “Legacy” with another screen legend, Eddie Garcia.

She was just as awestruck when she first shared a scene with the veteran actor. “It was an honor to act with him.

She relates well with her character Natasha. “She’s complicated and a real person, not just a saint or just a villainess.”

That was what attracted her to the soap. “All the characters are flawed. But then there are no perfect people in real life.”