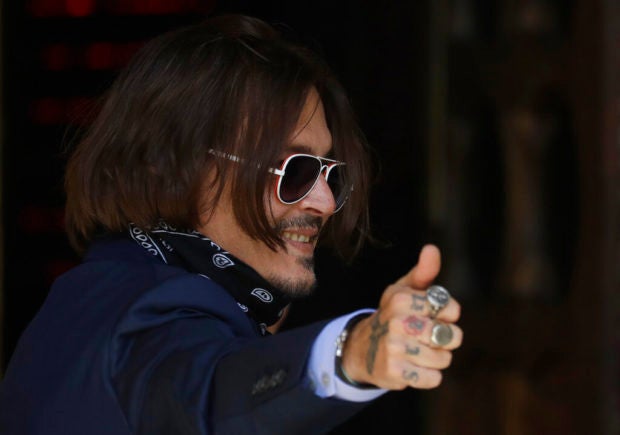 Actor Johnny Depp gestures as he arrives at the High Court in London, Friday, July 17, 2020. (AP)

LONDON  — A #MeToo activist said in a court document released Friday that she was “misquoted and misused” by a British tabloid newspaper in an article that accused Johnny Depp of physically abusing his ex-wife, Amber Heard.

Depp is suing News Group Newspapers, publisher of The Sun, and the paper’s executive editor, Dan Wootton, at the High Court in London over the April 2018 article, which called him a “wife-beater.” He strongly denies abusing Heard.

The article claimed there was a backlash by #MeToo activists against author J.K. Rowling because she was defending her “famous pal” Depp, a star of the movie adaptation of her book “Fantastic Beasts and Where To Find Them.”

It quoted Katherine Kendall, an actress and activist who says she was assaulted by jailed film mogul Harvey Weinstein, as saying ‘’it seems that Amber got hurt” and condemning violence.

In a written witness statement, Kendall said she spoke in April 2018 to a woman she later learned was a Sun reporter. She said she had been ”completely misquoted and misused by The Sun to accomplish their goal.”

“Although it was true that I was a victim of Harvey Weinstein, the rest was a lie,” Kendall said. “I was not ‘going public’ on behalf of #MeToo or myself, to criticize J.K. Rowling’s decision to cast Mr. Depp, nor did I accuse Mr. Depp of hurting Amber Heard, about which I have no first-hand knowledge.”

Kendall also said she had heard “several times” that Heard was abusive to Depp.

The Sun’s defense relies on 14 allegations made by Heard of violence by Depp between 2013 and 2016, in settings including his private island in the Bahamas, a rented house in Australia and the couple’s downtown Los Angeles penthouse.

He denies them all and claims Heard was the aggressor during their volatile relationship, which he has likened to “a crime scene waiting to happen.”

In nine days of testimony at the High Court in London, judge Andrew Nicol has heard from Depp and from several current or former employees who have backed his version of events.

One of Depp’s security guards, Travis McGivern, said Friday that Heard spat at Depp and threw a can of energy drink Red Bull at him during an altercation at the couple’s Los Angeles penthouse in March 2015.

Heard claims that Depp hit her and pulled her hair, but McGivern said “this did not happen and at no point did Mr. Depp hit Ms. Heard.”

Two of Depp’s former romantic partners, Winona Ryder and Vanessa Paradis, have submitted witness statements saying they could not reconcile Heard’s accusations of violence with the kind and loving man they knew.

Heard is due to give her side of the story when she enters the witness box on Monday.

On Friday Alejandro Romero, a concierge at the Los Angeles building where Depp and Heard lived, testified that tech billionaire Elon Musk visited Heard “regularly late at night” from March 2015, while she was married to Depp.

Heard and the Tesla founder had a relationship after she and Depp separated.

The Sun’s lawyer suggested Romero had got the date wrong, but he said he remembered well because it was just after Depp had hurt his finger.

Depp’s fingertip was cut off while he and Heard were in Australia, where he was filming a “Pirates of the Caribbean” movie, in March 2015. Depp alleges that Heard severed it by throwing a vodka bottle at him, a claim she denies.

Romero said a friend of his was “a big fan of Mr Depp and he was concerned about him not being able to play the guitar. That’s how I remember, and then the same day I saw Mr. Musk.”