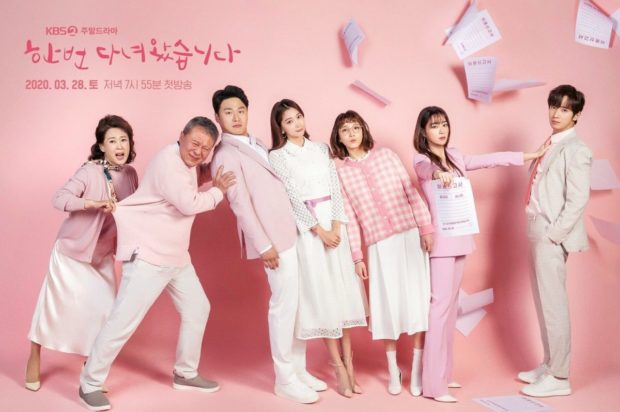 “Once Again” (KBS via The Korea Herald/Asia News Network)

SEOUL — Family TV series usually revolve around how the family as a whole reacts to relationship challenges like divorce and adoption, or present conventionally fundamental values, such as love and happiness.

In recent days, however, the eased influence of the traditional family structure and newly emerging family issues of “graduation from marriage” and marriages of sexual minorities have penetrated into the small screen in South Korea and resonated with audiences.

The KBS weekend show “Once Again” features the Song family, whose four children all get divorced. Each couple’s separation and post-divorce relationships bring about different reactions from old and young generations.

Na-hee, played by Lee Min-jung, one of the three daughters of the Song family, gets divorced from her husband but still lives with him because she cannot tell her conservative parents the truth.

Experts say the recent TV series has reflected the breakup of the stereotypical family notion, which was largely based on the Confucianism ideology, in recent decades.

“KBS’ ‘Once Again’ talks about the family as a haven that embraces the divorced,” Yun Seok-jin, a professor at Chungnam National University in Daejeon, said. “Now, TV shows start to narrate the change in family structure as single-person households have become the most common family type in South Korea.”

He noted it is different from KBS’ previous comedy “Five Enough” (2016), which candidly features the divorce but shows the restoration of family by remarriage in the end. Its heroine, a divorced mother with three children, finally ties the knot with a widower.

The new KBS drama’s well-rounded depiction of the generational gap helped the series reach a viewership of 33.3 percent on its latest episode that aired Sunday, marking the highest rating among KBS’ TV dramas in 2020.

Graduation from marriage, referring to living apart in one’s sunset years, is one of the main ideas of the tvN drama “My Unfamiliar Family,” which is about family members who have become used to a polite but emotionally constrained relationship.

The mother, who seems to have led a happy married life for decades with her husband and three grown-up children, decides to leave the marriage and start a new life.

The story is also multiplied by a gay husband of one of the daughters, who pretends to be straight and create a normal family.

The shattering of the family and the recovery of relationships have caught the eyes of Korean viewers. Its first episode on June 1 started with 3.1 percent in viewership, but the figure has been on a steady rise to hit 4.7 percent for its 10th episode on June 30.

The romantic comedy “Oh My Baby,” which ended its run on July 2, touches on issues that are widely known but seldom talked about in the conservative country — a single woman who wants to become a mother without marriage.

The drama revolves around a 39-year-old workaholic who plans to search for a sperm donor in a bid to have a baby of her own. It also weaves in a subplot of personal lives of those in their 30s and 40s, seeking a balance between work and family and suffering from infertility.

KBS’ rom-com “Men Are Men” and JTBC’s romance drama “Was It Love?” are also about a single mother and a woman who refuses to marry, respectively. (Yonhap)