Jennylyn Mercado to people rejoicing ABS-CBN’s closure: ‘You are cruel’

MANILA, Philippines — Although she is not a talent of the Kapamilya network, GMA actress Jennylyn Mercado lashed at to people who are happy about the closure of ABS-CBN.

(To those who are very happy with what has happened, I hope you won’t cry and to experience loss.)

“Hindi ba na tinuruan tayo ng ating mga magulang na maging makatao sa kapwa?” she added. “Rejoicing because of other people’s sorrow is not only wrong, but inhumane. You are cruel.”

(Weren’t you taught by your parents to have humility to others?)

After 13 hearings, the House of Representatives’  Committee on Legislative Franchises adopted a recommendation of the technical working group to deny the media giant a new franchise.

Seventy lawmakers voted to adopt the resolution, while 11 voted against. Two lawmakers chose to inhibit, while one abstained.

ABS-CBN has been off the air since May 5 after a cease and desist order was issued by the National Telecommunications Commission. 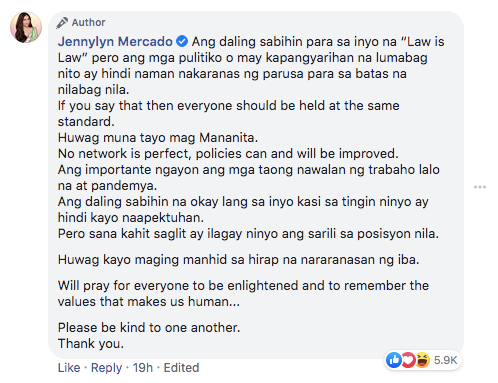 (It’s easy for you to say that ‘law is law’, but for the politicians who violated such laws were not punished.)

“If you say that then everyone should be held at the same standard,” she added. “Huwag muna tayo mag mañanita. (Do not celebrate a mañanita.)”

“No network is perfect, policies can and will be improved. Ang importante ngayon ang mga taong nawalan ng trabaho lalo na at pandemya (What’s important now are those people who may lose their jobs especially now that there’s a pandemic),” the actress said about the 11,000 employees of the network.

She was not done, as she had an additional message to those rejoicing: “Huwag kayo maging manhid sa hirap na nararanasan ng iba.”

(Do not be numb to the suffering of others.)

“Please be kind to one another,” Mercado said.