Sonar, divers search for ‘Glee’ star thought to have drowned 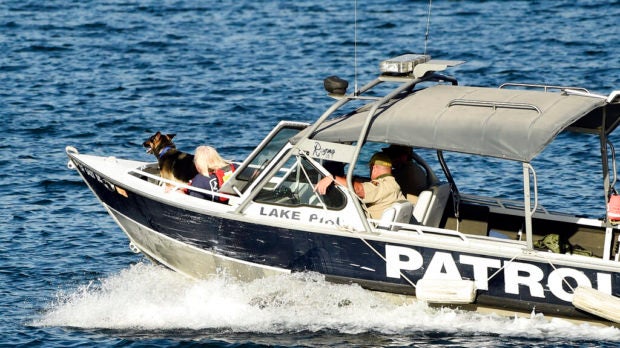 A patrol boat with a search and rescue dog heads out on Lake Piru Reservoir, Thursday, July 9, 2020, in Ventura, California. (AP)

Teams are using sonar and robotic devices in what could be a long search for “Glee” star Naya Rivera, who authorities believe drowned in a Southern California lake.

“We don’t know if she’s going to be found five minutes from now or five days from now,” Ventura County Sheriff’s Capt. Eric Buschow said at a news conference Friday, two days after Rivera’s 4-year-old son was found asleep and alone on a boat the two had rented a few hours earlier.

Search teams on Lake Piru are towing sonar devices across the surface that scan the bottom for shapes that might be a body, then employing small remote controlled devices to explore the underwater spaces that show promise.

Two such shapes were found Friday, but neither led to Rivera, Buschow said.

Divers are also still searching the murky waters, but fewer are being used than in the hours immediately after the 33-year-old was reported missing.

“We’re putting as many assets as we can out there,” Buschow said. “We appreciate everybody’s concern out there about locating her, and providing some closure for her family.”

Surveillance video showed Rivera and her son parking and entering the boat dock in the recreation area at the lake 55 miles (89 kilometres) northwest of downtown Los Angeles on Wednesday afternoon, authorities said. She had experience boating on the lake.

About three hours later, the man who rented them the pontoon boat found the boy alone on it wearing a life vest. The boy told investigators he and his mother had gone swimming, and he had gotten back on the boat but she hadn’t.

An adult life vest was found in the boat, along with Rivera’s identification, and her car was still in the parking lot.

On Thursday, authorities said they believed she had accidentally drowned, and the search had shifted from an effort to rescue Rivera to an attempt to find her body.

Search teams were focusing on the north end of the lake, known as the Narrows, where the boy was found, and the east side, where wind patterns suggest it might have been earlier.

The boy, Rivera’s son with actor Ryan Dorsey, was safe and healthy and with family members, authorities said. The couple divorced in 2018.

The last tweet on Rivera’s account, from Tuesday, read “just the two of us” along with a photo of her and her son.

If she is declared dead, she will become the third major cast member from the show to die in their 30s.

Cory Monteith, one of the show’s leads, died at 31 in 2013 from a toxic mix of alcohol and heroin.

And co-star Mark Salling, who Rivera dated at one point, killed himself in 2018 at age 35 after pleading guilty to child pornography charges.