Depp under pressure in cross-examination at Sun libel case 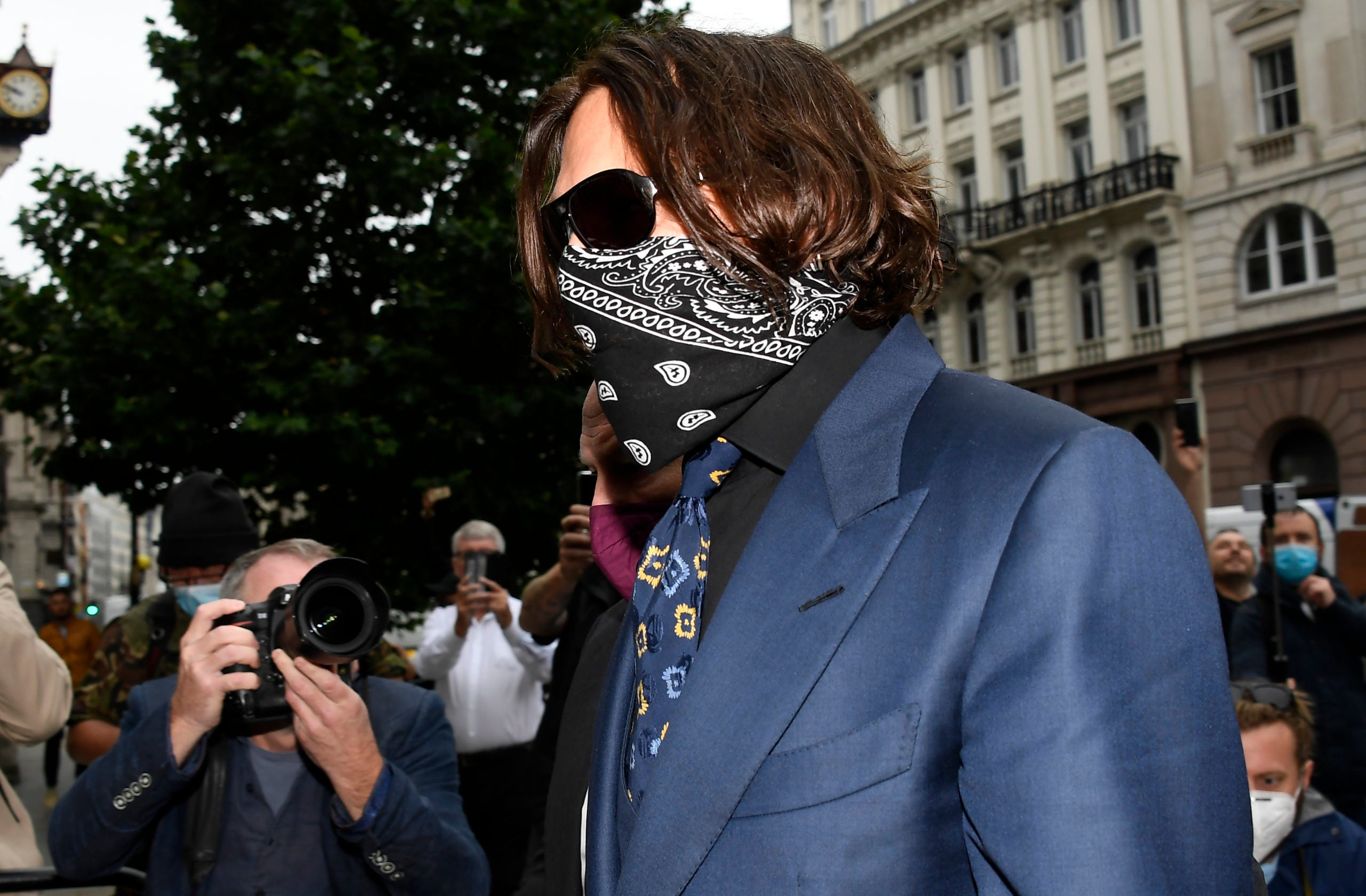 Johnny Depp arrives at the High Court in London, Thursday, July 9, 2020. Johnny Depp is back in the witness box for a third day at the trial of his libel suit against a tabloid newspaper that called him a “wife-beater.” Depp is suing News Group Newspapers, publisher of The Sun, and the paper’s executive editor, Dan Wootton, over an April 2018 article that said he’d physically abused ex-wife Amber Heard. He strongly denies ever hitting Heard. (AP Photo/Alberto Pezzali)

LONDON — Johnny Depp said Thursday that he has lashed out at objects but not at people, on the third day of evidence in his libel suit against a tabloid newspaper that called him a “wife-beater.”

He strongly denies ever hitting Heard, but has faced tough questioning at the High Court in London from The Sun’s lawyer, Sasha Wass.

Wass alleged Thursday that Depp had lashed out at Heard during an attempt to break an addiction to the opioid Roxicodone on his private island in the Bahamas in 2014. He denied physical violence but said Heard’s claim that he was “flipping” and “screaming” might be accurate.

“I remember that I was in a great deal of pain and uncontrollable spasms and such. … So flipping could be a word that was correct,” he said.

“I was not in good shape. It was the lowest point I believe I’ve ever been in in my life.”

Depp accused Heard of telling “porkie pies” — slang for lies — about his behavior. He acknowledged striking out at objects, saying it was better than “taking it out on the person that I love.”

He denied he could have been physically abusive and not remember it.

“There were blackouts, sure, but in any blackout, there are snippets of memory,” Depp said.

On Wednesday Depp acknowledged that he may have done things he can’t remember while he was under the influence of alcohol and drugs.

The admission came after Wass asked Depp about a 2014 private plane flight from Boston to Los Angeles. Heard alleges the actor went into a rage during the flight, slapped her and kicked her in the back because he believed she was having an affair with actor James Franco.

Depp denied assaulting Heard or being out of control on the plane.

Wass then presented Depp with a text he sent after the flight to a friend, actor Paul Bettany, saying he’d taken substances including “powders,” whisky, vodka, pills, and champagne on the plane. The message said the result had been “blackout, screaming obscenities and insulting any (person) who got near.”

“I may have done things that I have no memory of,” Depp said. But he insisted “I am certainly not a violent person, especially with women.”

The plane incident is one of 14 allegations by Heard of Depp’s violence between 2013 and 2016 that the Sun is relying on in its defense. 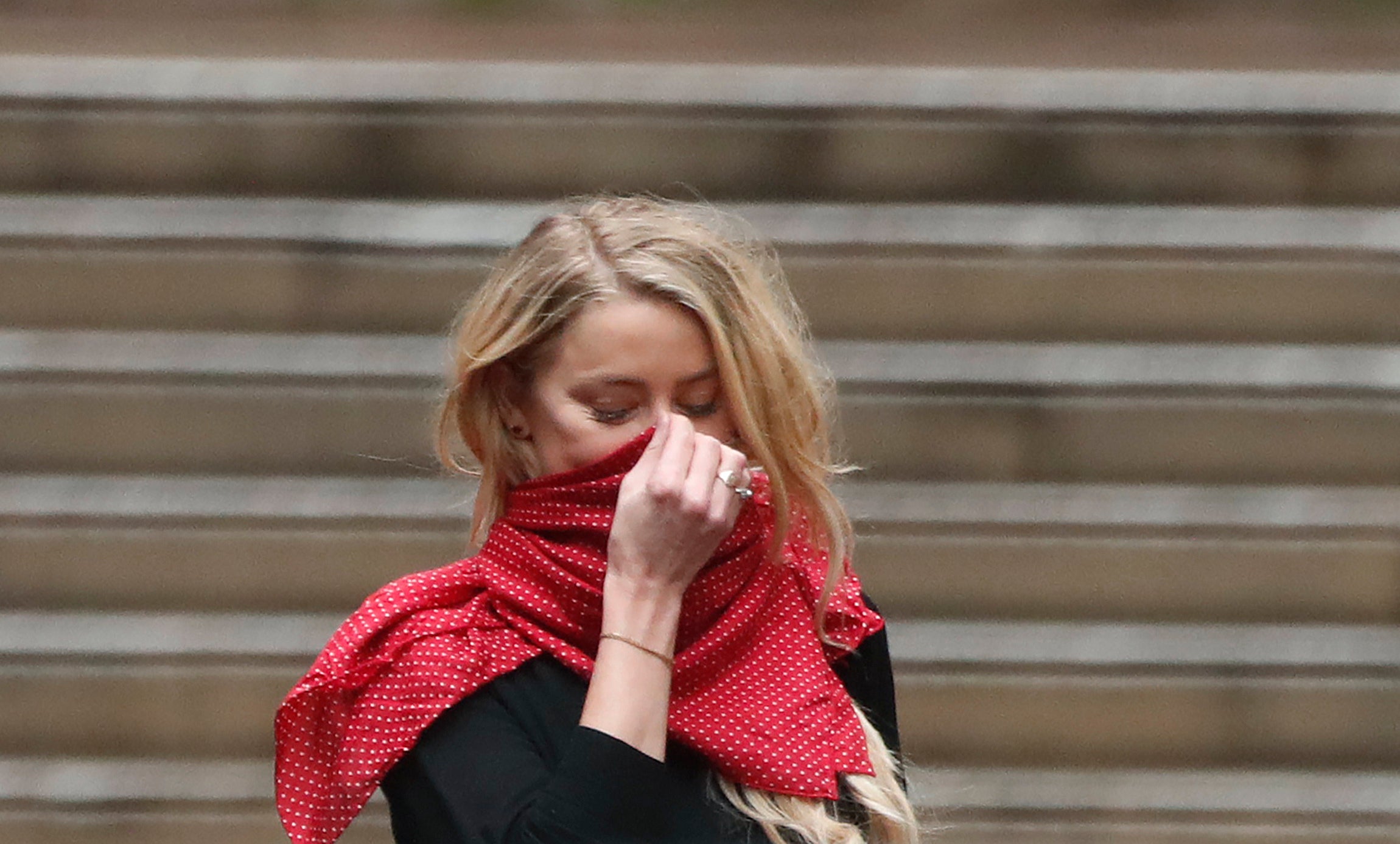 Amber Heard departs the High Court in London, Wednesday, July 8, 2020. Johnny Depp has denied an allegation by ex-wife Amber Heard that he is a “Dr. Jekyll and Mr. Hyde” monster who turned violent when he drank and took drugs, though he acknowledged in a London court that he may have done things he can’t remember while he was under the influence. Depp underwent a second day of cross-examination from a lawyer for British tabloid The Sun on Wednesday. (AP Photo/Alastair Grant)

The case is shining a light on the tempestuous relationship between Depp and Heard, who met on the set of the 2011 comedy “The Rum Diary” and married in Los Angeles in February 2015. Heard, a model and actress, filed for divorce the following year and obtained a restraining order against Depp on the grounds of domestic abuse. The divorce was finalized in 2017.

While neither Heard, 34, nor 57-year-old Depp is on trial, the case is a showdown between the former spouses, who accuse each other of being controlling, violent, and deceitful during their tempestuous marriage.

Wass read the court an email to Depp that Heard had composed in 2013 but never sent, saying he was “like Dr Jekyll and Mr Hyde. Half of you I love madly, and the other half scares me.”

Depp accused Heard of making up “hoax” abuse claims. He has acknowledged heavy drinking and drug use, but said Heard’s claim that drugs and alcohol made him a monster was “delusional.”

He also denied claims he hit Heard when she laughed at one of his tattoos, dangled her Yorkshire terrier, Pistol, out a car window, and threatened to put the dog in a microwave.

Depp acknowledged having a “rather skewed” sense of humor and said the microwave comment was a running joke because the dog was so tiny.

Heard is attending the three-week trial and is expected to give evidence later.

Depp is also suing Heard for $50 million in the U.S. for allegedly defaming him in a Washington Post article about domestic abuse. That case is due to be heard next year.