NEW YORK  — Since contracting COVID-19 in March, Tom Hanks has been, by most measures, busy. He and his wife, Rita Wilson, flew home after recuperating in Australia, where he had been shooting Baz Luhrmann’s Elvis Presley film. 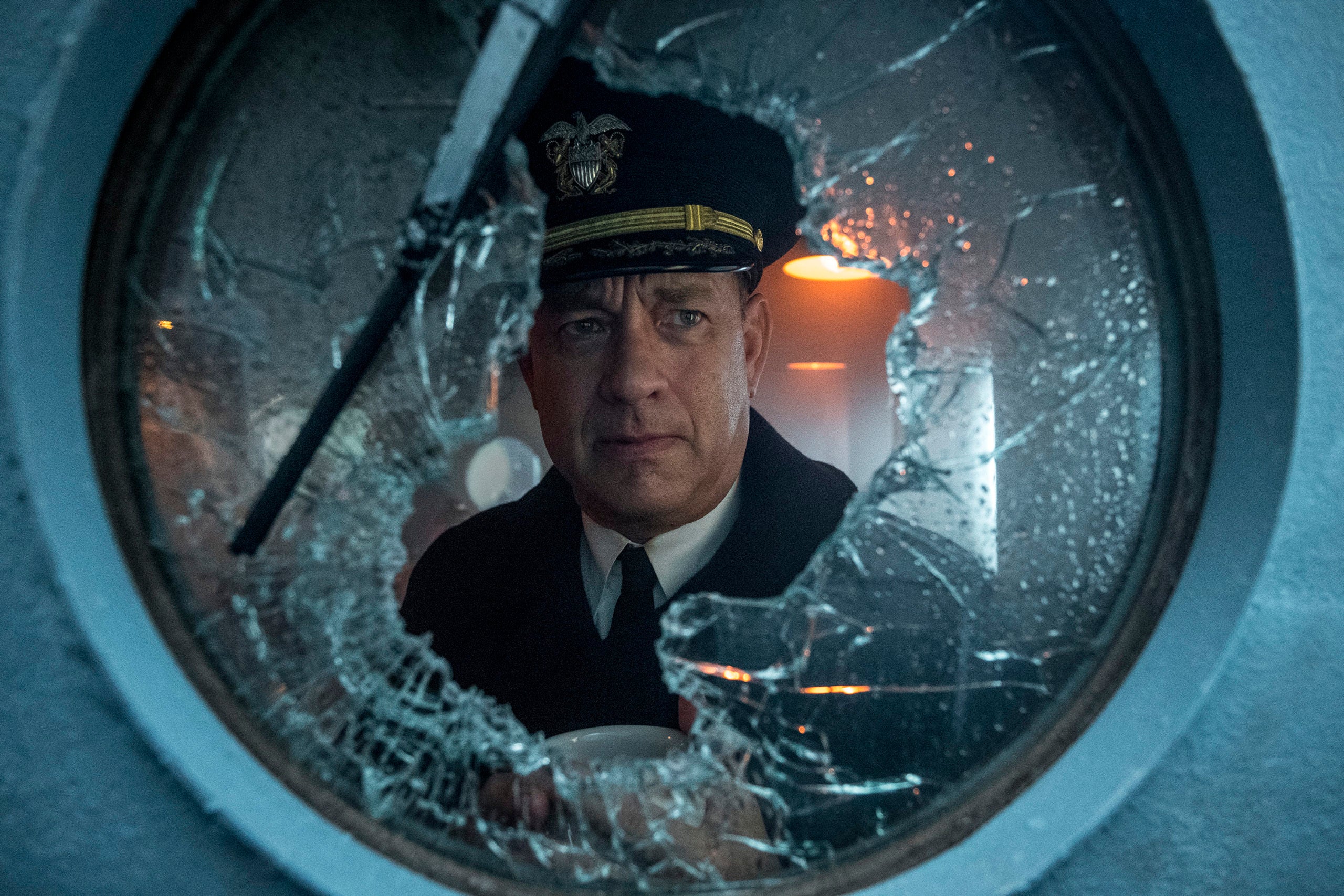 This image released by Apple TV Plus shows Tom Hanks in a scene from “Greyhound.” (Apple TV + via AP)

He hosted a from-home episode of “Saturday Night Live,” an already distant enough memory that it takes a beat for him to remember it.

But he’s mostly been taking it day by day.

“There’s sort of an ongoing physiological maintenance for your brain and for your body that we’ve been following through,” Hanks says, speaking by video conference from his home in California.

“What can you do but try to bind up the hay in neat little bundles. That’s what we’ve been doing. Just going into the barn with the baling machine, saying, ‘Well, we got all this hay. Let’s at least stack it up and get it ready for the next day.”

For many, Hanks’ contraction of COVID-19 was the first loud alarm bell that went off in the early days of the pandemic.

If “America’s Dad” could get it, so could anyone. The decision to go public with their diagnoses, Hanks said in a recent interview, was twofold. He didn’t want any rumors about why the production was shut down. And if he was going to serve as an overdue public service announcement, so be it.

“Why hide from the facts?” he says. “These were the facts.”

The ordeal, one experienced with varying severity and symptoms between Hanks and Wilson, gave him a perspective on differing national responses to the coronavirus.

The comparison with Australia, Hanks grants, isn’t a favorable one for the United States. But he says, there’s no need for “another dump truck to unload all the things that have gone wrong” in the U.S.

“Here we are. And let’s just all do our part, eh?” says Hanks. “Can we not all just wear a mask and social distance and wash our hands? It sounds pretty simple to me, and if you have a problem with that, I certainly wouldn’t trust you with a driver’s license. Chances are you’ll drive as fast as you want to, never use your turn signal and aim for pedestrians.”

Before the pandemic, “Greyhound” was going to hit theaters in early June, smack in between “Wonder Woman 1984” and “Top Gun 2.” “We were going to fight like the scrappy runt of a litter in order to get somebody to pay attention to us,” says Hanks, chuckling.

Now, “Greyhound” will head straight into homes as a marquee event with little competition of similar scale or star power. A Tom Hanks-led, special effects-laden WWII movie is a weight class above most straight-to-streaming options in this strange summer movie season. Disney+ has “Hamilton,” but Apple TV+ has Hanks.

The film, made for about $40 million and acquired by Apple for a reported $70 million, is a taut 88-minute naval drama about a lesser-seen theater of WWII, the Battle of the Atlantic.

Hanks’ character is a humble captain for the first time shepherding a convoy of boats across the Atlantic, guarding them from attacking German U-boats while traversing the “black pit” – the middle ocean territory bereft of air support. All heavy waves, faint sonar blips and evasive maneuvers, the film takes on almost mythical qualities.

“When everything went kablooey, we began to imagine: ‘Well, we have this movie about the stasis of characters in the middle of something of which they have no idea how long it’s going to last,'” says Hanks. “We didn’t expect a worldwide pandemic to mirror the theme and the action of the movie.”

“This is just about yesterday, today and tomorrow,” Hanks says. “Those three days are pretty much all humanity has.”
“Greyhound” has long been a pet project for the 63-year-old actor.

He wrote the script, adapted from C. S. Forester’s 1955 novel “The Good Shepherd,” a book first given to him by his late friend and “Sleepless in Seattle” director Nora Ephron.

“It just stuck with him,” says Gary Goetzman, Hanks’ producing partner and co-founder of their company, Playtone. “As happens with him, he’ll ruminate about a certain idea, it goes in his blender, and one day he just put a script on my desk and very much wanted to make it.”

Hanks had approached others to write it and met with other filmmakers. But they tended to envision a grander version of the film.

Instead, he found a director in Aaron Schneider, a veteran cinematographer who last helmed 2010’s “Get Low,” with Robert Duvall.

“Tom always called it ‘the perfect little 90-minute movie,'” Schneider says. “From the beginning, his point of entry was about maintaining this almost hyper-subjective point of view in terms of this captain’s experience. You would throw the audience into his world, sticking to over his shoulder.”

Hanks, of course, has been in similar worlds before. He’s been a captain four times previously: “Saving Private Ryan,” “Apollo 13,” “Sully” and — his last time manning the bridge — “Captain Phillips.” A voracious reader of history, he’s returned frequently to WWII. With Seven Spielberg, Hanks is currently developing for Apple a third miniseries, following “The Band of Brothers” and “The Pacific.”

For Hanks, whose father served in the Navy, his attachment to the era goes deeper than DNA. It’s about connecting to the wartime mentality of survival and sacrifice.

“I’m asked by every journalist, ‘Why do you keep going back to World War II?'” says Hanks, donning a vaguely European accent.

“The answer is because I come back to that position of the stress upon a human being’s psyche. It doesn’t have to be a captain, necessarily, on board a destroyer in the middle of the North Atlantic. It can be on an 8-year-old kid or a 24-year-old woman or even a 54-year-old man back in the United States wondering, ‘Are we going to live or die? Are we going to be free or not? How long is it going to go on?’ To me, that’s the human condition in every circumstance, even in today in 2020.”

The film had just weeks of post-production remaining when Hollywood shut down. During that time, a modern-day Navy captain, Capt. Brett Cozier, was removed from command on the aircraft carrier USS Theodore Roosevelt after pleading for permission to take crew members ashore during a COVID-19 outbreak on the ship.

In Cozier, who like Hanks later tested positive for the virus, Hanks saw the kind of character he’s often drawn to playing.
“I thought,” said Hanks, “that guy’s kind of badass.”