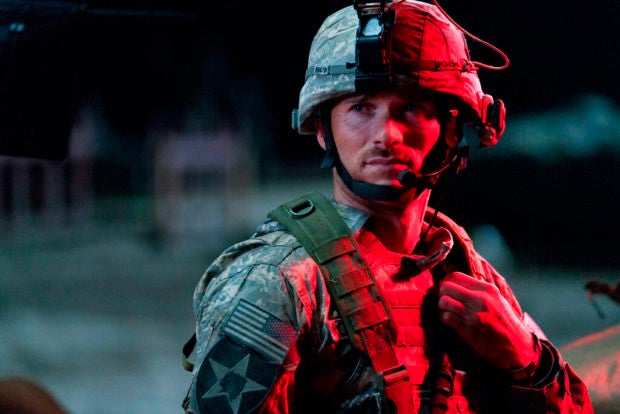 This image released by Screen Media shows Scott Eastwood in a scene from “The Outpost.” The film tells the story of the heroic Battle of Kamdesh in Afghanistan in 2009, where the Taliban attacked a remote American Combat Outpost that was nearly impossible to defend. (Screen Media via AP)

LONDON — An accident requiring two screws in his ankle nearly prevented Scott Eastwood from portraying a real life soldier in Afghanistan in “The Outpost” — a role that required a level of athleticism.

Eastwood was tight-lipped about how he was injured, but he said it led to an “interesting” shoot. Director Rod Lurie had a “tough as hell time trying to figure out how we were gonna design shots where for the first few weeks I couldn’t walk,” he said.

Lurie rescheduled the entire shoot, starting with static scenes and shifting the action to the end. “When you see Scott Eastwood in this movie, running and gunning, you gotta remember this dude has got a broken ankle and he’s a bit of a stud. Just like his dad,” he jokes. Eastwood, who portrays Staff Sgt. Clint Romesha, is the son of action-movie actor Clint Eastwood.

“The Outpost,” which also stars Orlando Bloom and Caleb Landry Jones, follows the Battle of Kamdesh in Afghanistan in 2009. The Taliban attacked a remote American Combat Outpost, deep in the mountains, that was nearly impossible to defend. Despite winning the battle and holding the base, eight American soldiers died.

It’s a story of “regular soldiers” Lurie explains. “These guys are on the ground, they have to pay the penalty not just for being in a war, but also for maybe the tactical and strategic mistakes of the command above them.”

“It’s not a pro-military film. It’s certainly not a pro-war film, but it might be a pro-soldier film,” Lurie adds. “I was a soldier myself, and so I’ve got this deep connection to these guys and to what is the internal fortitude of these guys is something that we really wanted to get across.”

The movie is based on the book “The Outpost: An Untold Story of American Valor,″ by CNN journalist Jake Tapper.

Making “The Outpost” was made even more personal for Lurie when his son Hunter died suddenly during pre-production.

“He was 27 years old,” Lurie explains, “and when he did die, and he did it right in front of my eyes, he himself became a reminder of the men who died in this battle. Because he was roughly the same age as those guys.”

Hunter Lurie died in 2018 after going into cardiac arrest at a music festival.

Lurie said he wanted to shoot the soldiers who lost their lives in the battle “honorably and without the glamorization.”

Jones portrays Spc. Ty Carter, a survivor who won the Medal of Honor. Jones said he was inspired by Lurie’s direction.

“I was excited that it seemed that this man was wanting to not only do the story but wanted to do everything within his power to make sure that we do right by these men that fought for our freedom,” said Jones, who has had roles in “X-Men: First Class” and ”Get Out.”

The result is “a very visceral and kinetic storytelling of this. It leaves you with the people. You’re with them in uncomfortable times, in times of extreme emotion, dealing with the psychological effects,”

“I felt what it must have been like to be there and to lose people and to be a part of that,” Eastwood said. “And I just found myself very emotional.”

Bloom, who plays Capt. Ben Keating, said he felt a “duty of responsibility” to his character. He talked with Keating’s father and worked some of those shared memories into his portrayal.

“I felt very connected to him and I think all of the boys out there did too, you know, to their own characters,” Bloom said. “And it was, it was very sincere, you know … There was a lot of heart in it.”

Jones was encouraged to go for the role of Carter by his older brother, who serves in the Marines.

“He read it and you know a few hours then he said, Caleb, you’re doing it. And I said, is it good? And he said, no, you don’t understand. You’re doing it.”

Jones felt the added pressure of his brother and the real-life Carter being on the set.

“I’m surprised I didn’t run away or something. You know, my older brother watching, Ty the guy I’m playing watching…I already make it hard on myself!”

Ultimately, he says it added to the depth of his performance.

“To be able to look over and see him in the eyes and see him nod or see him shake his head or being able to look at Ty too and see that if I’m doing anything right at all by trying to convey this.

“The Outpost” is in selected cinemas and on-demand Friday.