Angela Bassett set to return to Broadway this fall 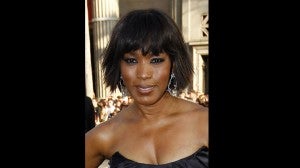 In this June 15, 2011 file photo, actress Angela Bassett arrives at the premiere of her film "Green Lantern" in Los Angeles. Bassett will return to the Broadway stage in the role of Camae starring opposite Samuel L. Jackson as Dr. Martin Luther King, Jr. in the Broadway production of the play, "The Mountaintop." AP Photo/Matt Sayles, file

NEW YORK— Angela Bassett has signed on to star opposite Samuel L. Jackson in the Broadway production of the play “The Mountaintop.”

Producers announced Tuesday that Basset will play the mysterious woman who visits the Rev. Martin Luther King Jr. at the Lorraine Motel in Memphis in playwright Katori Hall’s re-imagining of the night before the civil rights leader’s 1968 assassination.

“The Mountaintop,” the winner of the best new play Olivier award in London, will begin performances on Sept. 22 at the Bernard B. Jacobs Theatre on 45th Street. An official opening is set for Oct. 13.

Basset, 52, an Academy Award nominee who played Tina Turner in “What’s Love Got to Do With It” and who can currently be seen in the film “Green Lantern,” takes over after Halle Berry pulled out due to child custody issues.

Jackson, 62, will be making his Broadway debut in the play. His many films include “Pulp Fiction,” ”The Negotiator,” ”Iron Man,” ”Snakes on a Plane” and “Changing Lanes.”

“These two remarkable actors have excited audiences around the world for many years, and bringing them together in this extraordinary new play on Broadway promises to be a major highlight of the season,” producers Jean Doumanian and Sonia Friedman said in a statement.

“The Mountaintop” made its world premiere in 2009 in a small London theater before transferring to the West End. That production starred David Harewood as King and Lorraine Burroughs as the mysterious stranger.