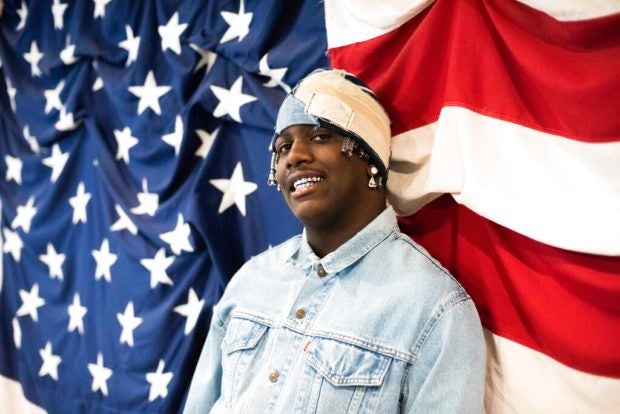 In this May 29, 2020 photo, Lil Yachty poses for a portrait to promote his new album “Lil Boat 3” in Atlanta. (Photo by Paul R. Giunta/Invision/AP)

NEW YORK — If it weren’t for Grammy-winning rapper Young Thug, Lil Yachty’s latest album might be filled with slow, melodic love songs, the opposite of what fans received last month.

“I played it for Young Thug. He was like, ‘Nah. Nahhhhh,’” Yachty said with a laugh. “He was like, ‘You need to make it more up-tempo, bro. You need more hits, more energy.’ And I was like, ‘OK, Young Thug.’ So I went back again and started over.”

But that wasn’t the first time the 22-year-old scrapped an entire version of “Lil Boat 3” and started from scratch. The final version, which was crafted out of 200 songs he recorded, experienced several starts and stops.

“I just kept getting re-inspired. Like one time, it was this alternative album that was just trippy and all over the place,” said Yachty, now free of his signature red-dyed braids he says severely damaged his hair. “I was like, ‘Nah, it’s been too long since I dropped. I can’t come back like this … It’s gotta be turnt.’”

In an interview with The Associated Press before Yachty totaled his red Ferrari in Atlanta after spinning out of control, the rapper talked about his album, experiencing fame at a young age and inclusivity.

AP: Were you able to learn anything from Drake while working together?

Yachty: I just learned that there is a lot richer you can be. I thought I was rich. That guy — wooooo! (He) makes me feel poor. That’s a big motivation because, like, man, it’s so many more levels and so many more steps. And I can never be content and just be comfortable where I am, because it’s so much further I can go. And that’s nothing he ever told me. It’s just by seeing or either talking to him or just like watching him, which is good because you need that inspiration to fuel you sometimes.

AP: You received a lot of praise for your “Oprah’s Bank Account” video, but also some backlash for dressing like the media mogul in heels and a dress.

Yachty: I had forgot that the world was how it is. Even when we were shooting, I didn’t think, “Bro, people are gonna be on my (expletive) about this!” …So, I when I dropped it and it got a lot of backlash, I forgot people are stupid.

AP: You mentioned you grew up in a very inclusive household?

Yachty: My dad is a photographer, and he shot hip-hop. You know, he shot Outkast early, Dungeon Family, John Legend, Kanye West — all types of celebrities. …He didn’t make fun of gay people. He never said, “Hey, don’t do this, son. See, that’s gay. It’s not right.” Never. My mom definitely didn’t do that. I’ve never heard them say the word “gay” ever to this day. They taught me to be open-minded. My dad was a very open-minded person.

AP: You recorded hundreds of songs and mentioned it was hard choosing 19 for the album. What was the most difficult part?

Yachty: It’s almost like I’m just trying to make what I think is best, you know? But that’s not the way it should be. You should make what you genuinely want to make.

AP: You’ve been famous since you graduated high school. How have you navigated the pressures of fame?

Yachty: I had to deal with a lot of (expletive), you know, cut a lot of people out of my life. Just got burned a bunch of times. My circle’s super small now. I still ain’t never been, I feel like, in a real relationship or real love. I’m scared. It’s (expletive) up, especially since I came straight from high school, so I didn’t have no time to get to meet nobody and have nobody meet me before I got famous or rich. Like, to meet me as me: as a man, as a person, as a human being. So, it’s hard to tell the difference … I try with women. I got bad trust issues, though. I’m not gonna lie.

AP: You’ve said you haven’t received the respect you deserve from the industry. What do you think you need to do to get it?

Yachty: Bro, I don’t know. that’s a great question. I don’t know if I gotta write 100 hits for 100 different artists? Do I gotta go to 100 different radio (stations) and do 100 freestyles? I don’t know. But we’ll figure it out. I think people are just genuinely hating me … I pray that I don’t have to die to get my respect, but someone’s gonna give it to me.