With Evans, Fanning and Bruhl on NY set of ‘Darkness’ . . . in Hungary LOS ANGELES—In late 2019, way before the coronavirus pandemic struck, we went all the way to Hungary to visit New York in the late 19th century. In a studio outside Budapest, a large, full-scale replica of 1890s New York was created for “The Alienist” and its Season 2, “Angel of Darkness.”

On cobblestone streets, Victorian Manhattan was back to life with barber shops that advertise haircut for 5 cents, and shave and shampoo for 10 cents each. There was an oyster saloon that was complete in details, inside and out. An outdoor market had real produce—potatoes, onions and more. In front of a meat market, realistic looking carcasses hung from hooks.

A shuttle took us to a palace where “The Alienist: Angels of Darkness” stars Luke Evans (John Moore), Dakota Fanning (Sara Howard) and Daniel Bruhl (Laszlo Kreizler) were filming a lunch scene at Delmonico’s, a famous Lower Manhattan restaurant in that era.

First aired on TNT as a 10-episode limited series, “The Alienist,” based on the same novel of the same name by Caleb Carr, was a hit, so a sequel series was ordered.

Adapted from the follow-up novel by Caleb, “Angel of Darkness” continues the psychological thriller, this time involving the search for a kidnapped infant daughter of a visiting Spanish dignitary.

We watched the three leads film take after take of their scene in the restaurant. After that scene, the three actors talked to us separately.

“We were drinking nonalcoholic wine,” Dakota said about what they were drinking in the scene we just watched. She still wore the costume by Rudy Mance. “Very sweet, like grape juice.” Laughing, she said, “What we’re talking about and in between takes is not for anyone to hear about (laughs). But we’re one another’s everything at the moment. Daniel has members of his family who come to visit. It’s easier for them to travel home than it is for me. So, I’m the one who’s planted here.

“But we are so lucky to truly get along and it makes [up for] days that are long. In these costumes, it’s been truly sweltering and you have to be with people who you love to get through those days sometimes.”

Asked to give a teaser about Season 2, Dakota began with, “We see Sara Howard at the beginning of this installment, running her own detective agency. We met her last time as the first woman employed by the New York Police Department and the secretary to the commissioner. Sara has aspirations beyond that position and we see the results of the year that’s gone by, in her detective agency. 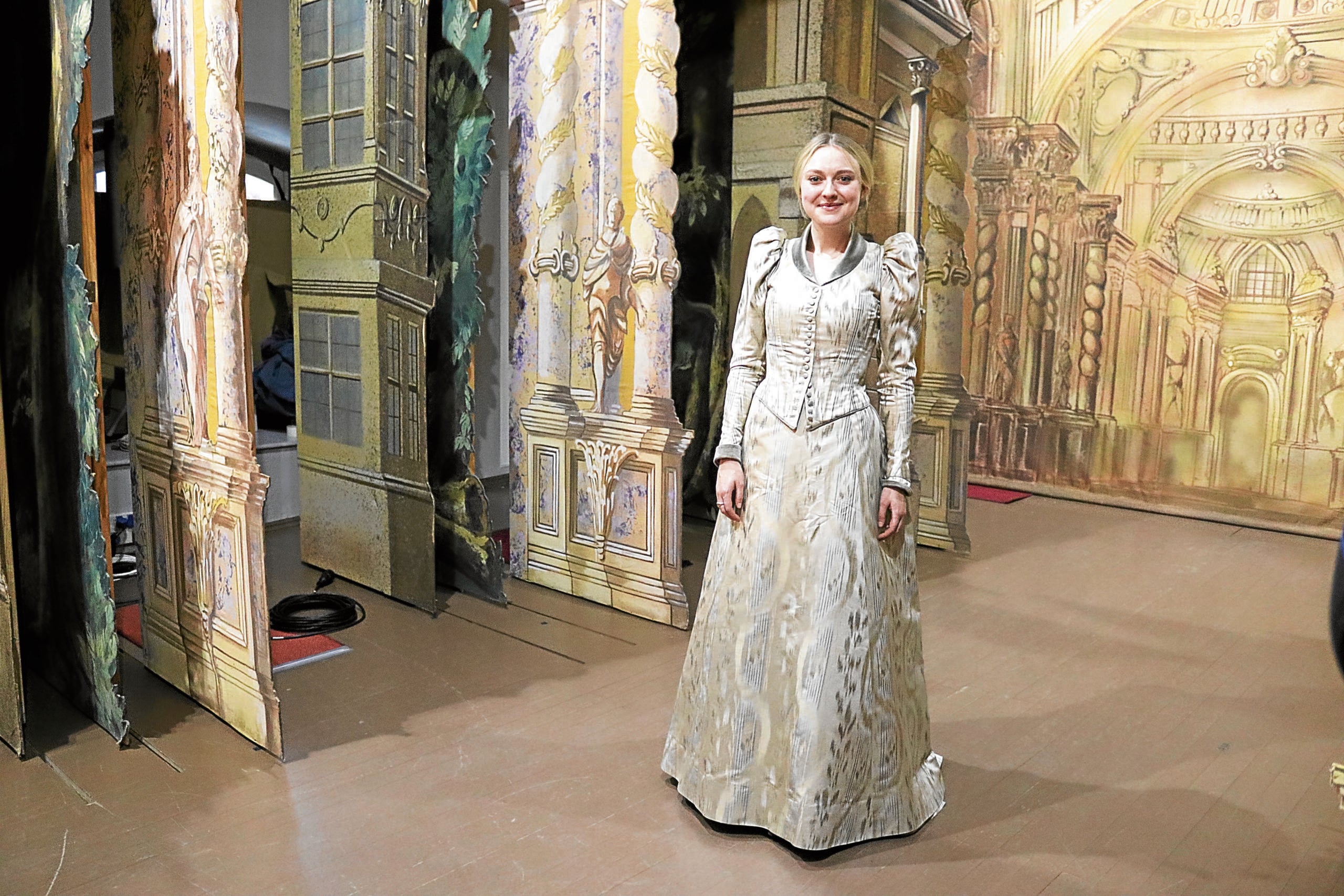 “The team comes together again with some new faces as well, which has been nice to have. New energy and also all of the other characters from last time. So, it’s very exciting for Sara, right from the get-go.”

On the love triangle that her Sara character is involved in, Dakota explained, “In ‘Angel of Darkness,’ you will definitely see that we dive deeper into the seeds that were sprinkled in ‘The Alienist’ in terms of John and Sara’s relationship. He is engaged to Violet (Emily Barber). We see how that unfolds over the episodes.

“What we saw from Sara in the ‘The Alienist’ was that even though she’s such a modern woman, there were still things that were holding her back. In ‘Angel of Darkness,’ we see Sara trying to conform to those things even less than in the ‘The Alienist,’ pushing back harder and almost feeling like she doesn’t have anything to lose, so she just is living her life boldly.”

“Most of the time—not today because we’re filming in Delmonico’s—I’m actually wearing pants,” Dakota said about her costumes. “Culottes so it looks like a skirt, but really they’re pants.”

Pressed for more details about Season 2, Dakota replied, “This is the first time I’m talking about it to people outside of who I’m working with, so I’m trying to figure out what to say and what not to say. It definitely takes inspiration from the book. But as with anything, you have to veer off in certain ways.

“I don’t think that we shy away from some of the grizzlier aspects. That’s because of the nature of the time period. It was a time that can be grizzly and violent, especially the streets of New York which had such tension back then.”

“I don’t think I should say,” she answered when asked who the antagonist is. “I feel like if I say, even in broad strokes, it might give it away. Sorry. But there’s a mystery we’re trying to solve, someone that we are trying to find, that makes itself known from the very beginning.

“I was so excited that people were so attached to the mystery, who was committing these crimes. Someone even said to me, ‘I think it’s Kreizler.’ I was like, ‘Wait, what?’ Like, no, it was so surprising. People who responded to that aspect of the ‘The Alienist’ are going to be even more excited by the mystery element in ‘Angel of Darkness.’”

On the irony of being all the way here in Hungary for a story set in New York, Dakota smiled as she said, “You’ve seen the back lot, which really transports you. New York is built on other people’s histories. People came to New York from all over the world. So, it is influenced by all parts of the world.”

On the friendship she has developed with Luke and Daniel, Dakota’s face lit up as she said, “We have such a teasing, joking relationship. It’s so funny, Daniel and I are always giving each other a hard time. I’ve learned so much from both Daniel and Luke. We’re coming back and playing the same characters, getting to watch everyone pick up where they left off.

“There are certain times when you’ll say, ‘I don’t think this is something that Doctor Kreizler would say.’ Or, ‘This doesn’t feel like Sara to me.’ We have to adjust things because we have such a good idea of who these characters are by this point.

“I’ve learned so many things I can’t pinpoint even just one thing. I love both Daniel and Luke more than just as actors. As human beings, we’ve kept each other going in so many ways. Daniel said to me today, ‘In 10 years, we should work together again.’ I said, ‘That’s a long time.’ He was like, ‘Maybe three.’ I was like, ‘OK, this is funny.’”

Dakota confirmed that Elle Fanning has visited her: “She’s working in London at the moment. I wasn’t working on the day that she came so we just went to the set to say hello, quickly. I had visited her on many sets.”