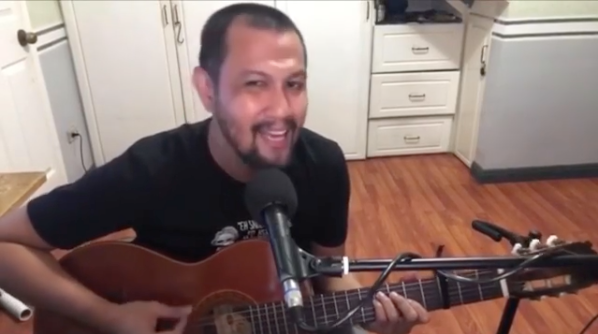 Danao, who is among the local entertainers who are vocal on socio-political issues, shared with fans his performance of the century-old song through his official YouTube account yesterday, June 17.

Popularized in recent times by the Spanish series “La Casa de Papel” or “Money Heist”, the origins of “Bella Ciao” (“Goodbye, Beautiful”) date back to the late 19th century.

The folk song originated from the mondina women, the paddy workers in northern Italy who turned to music to lament harsh working conditions, according to musician Jerry Silverman’s book “Songs That Made History Around the World”.

During World War II, the song became an anthem for the anti-fascist resistance movement of Italian partisans, who rose against the dictator Benito Mussolini and the Nazi occupation.

Sandoval’s Tagalog translation was based on the partisan version of “Bella Ciao”.

Danao noted that this is Sandoval’s final translation of the song after it went through the Galian sa Arte at Tula workshop and was first performed during the “Dingas” European tour of Susan Fernandez, Jess Santiago and Pol Galang through a script written by Reuel Aguila in the 1980s. JB

Read Next
‘No rush’: Megan Young, Mikael Daez in no hurry to have a baby
EDITORS' PICK
Senate may remove lump sums in 2021 budget due to NEP insertions – Lacson
Fire hits JG Summit petrochemical plant in Batangas City
Water remains our saving grace right now
The power of two: Renewable energy and natural gas are the cleaner, better combination
PH COVID-19 total caseload now at 301,256
KZ Tandingan taking it one step at a time
MOST READ
PH Embassy in Qatar suspends repatriation of OFWs
Fire hits JG Summit petrochemical plant in Batangas City
Has Duterte done any good? Robredo says yes, but he missed out on many things
Slower internet seen due to 5-day maintenance work
Don't miss out on the latest news and information.