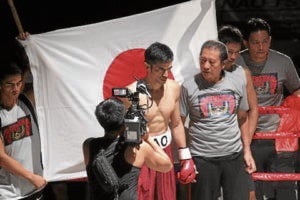 While boxers in other countries pursue the sport for recognition, Pinoy boxers engage in it for survival.

This was what award-winning independent filmmaker Brillante Ma Mendoza said he discovered while making “Gensan Punch,” the English-language film that tells the true story of Japanese Naozumi Tsuchiyama, who became a professional boxer despite having an artificial leg.

The film follows Tsuchiyama from Japan to the Philippines, where he became known in Gensan (short for General Santos), which has spawned boxing stars like Manny Pacquiao.

The film, scheduled to wrap next month, is a coproduction of Mendoza’s CenterStage Productions and the Japan-based Gentle Underground Monkeys. “Gensan Punch” is Mendoza’s first sports biopic.

“They pitched the project to me when we first met in Cannes (France). I didn’t think much about it until they contacted me again while in Busan (South Korea) to discuss it further. I asked them to visit me in the Philippines because I don’t personally know the story and I have to research on it first,” Mendoza told Inquirer Entertainment on Wednesday.

It was then that Mendoza finally got to explain to his Japanese co-producers his filmmaking process. “I told them that we needed to personally meet Tsuchiyama, as well as to fly to Gensan to develop the story,” said Mendoza, adding that he commissioned Honey Alipio to write. “In Gensan, we went to the gym where he trained and talked with people there.”

Mendoza said it was there where he experienced an “awakening.” He explained: “Everybody wants to be Manny. They were inspired by Manny’s success. We learned all about their struggles as boxers; that life there is hard for them. While others box in order to prove their worth, these Pinoy athletes box to survive. There’s a big difference in their perspectives.”

More than the struggles of Tsuchiyama (portrayed by Japanese actor Shogen), the film also tells of the plight of Filipino boxers in the area. Scenes were also shot in Okinawa and Fukuoka in Japan, the director said.

According to an article on the news portal screendaily.com, the UK-based SC Films International recently picked up the rights to distribute “Gensan Punch.” It will present initial footage from the film at the upcoming virtual Cannes market to be held from June 22 to 26, the report added.

“Since I usually premiere my movies in film festivals first before negotiating with any distribution company, they asked my opinion on the distribution deal. Apparently, they wanted to promote the movie ahead (of its festival run),” Mendoza said. “I said it’s good that we’re able to sell the film. It’s very difficult to do that these days because we’re experiencing a pandemic.”