‘A Thousand Cuts’: Film shows democracy on trial, but Maria Ressa fights with hope and love 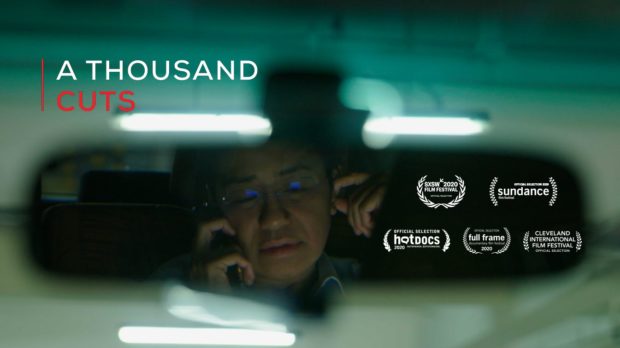 Maria Ressa is the main subject of documentary “A Thousand Cuts”. Image: Twitter/@_athousandcuts

As Rappler CEO Maria Ressa faces a verdict on her cyberlibel case tomorrow, June 15, the documentary film “A Thousand Cuts” takes a look at how she, as a member of the press, has braved attacks under the Duterte administration.

The documentary shows in broad strokes how populism grows in the country and the consequences it has on a free press and democracy. It also gives an inside look at how Ressa deals with threats and harassment from the government as well as on the internet.

The film, directed, written and produced by Filipino-American filmmaker Ramona S. Diaz, streamed for a limited period on YouTube in the Philippines from June 12 — Independence Day — until yesterday, June 13. It was produced by CineDiaz in association with Motto Pictures, and developed in association with Topic Studios. It also screened at the esteemed Sundance Film Festival last January and has been recently acquired by Frontline, the longest-running investigative documentary TV series in the United States, under PBS (Public Broadcasting Service).

Amid online clamor, there are plans to stream the movie again, according to the documentary’s Twitter account. In the meantime, in case you missed the recent two-day streaming, here are a few highlights on how the film depicts the country’s democracy under trial.

How disinformation affects every Filipino

When Rappler gets attacked online for its pieces on the drug war in 2016, the film looks into how disinformation — false information meant to mislead — spreads in the country. It finds that disinformation can be traced back to dummy accounts; Ressa cited a case where they found one account with 25 followers, all of whom follow each other and can influence up to 3 million other internet users.

President Rodrigo Duterte and his allies, one of whom is dancer Mocha Uson, where shown in the film to have fanned the flames of disinformation. The film recalled when Duterte released in 2019 an “ouster plot matrix” of organizations — which included Rappler — allegedly conspiring to remove him from power, despite no evidence to back his allegations.

Ressa says that Uson, through her Facebook blog, popularized “presstitute”, a term to discredit traditional media. As distrust against traditional media and institutions is fueled, Filipinos shift to alternative sources such as Uson’s blog.

How empowered women are treated in the Philippines

Rappler is led and run by women — the film shows Ressa constantly seeking counsel from her top editors, all of whom are female. In Ressa’s world, as shown in the documentary, women can do anything, from questioning the government to running a company.

But challenging the status quo comes at a cost. Duterte publicly shames Rappler reporter Pia Ranada in 2018 for questioning a deal involving his right-hand man and now-senator Bong Go. Ranada also gets banned from entering Malacañang.

Despite Duterte’s misogynistic remarks, which are shown throughout the film, Uson continues to pledge devotion to the President. When she runs to become a party-list representative in 2019, Uson constantly uses the Duterte fist bump and promotes the President. After her failed bid, she is appointed to a government post.

Loud political rallies of the President and his allies, such as that of the then-campaigning Sen. Ronaldo “Bato” dela Rosa, show that Duterte’s popularity remains throughout the country. In contrast, Ressa is cheered and applauded in smaller events at home and in the United States, where she is encouraged through warm hugs and kind words, rather than with wild cheers.

Viewers were also afforded an intimate look on where she draws personal support, such as her sisters, whom she makes time for in the midst of her tight work schedule in and out of the Philippines. As one of them helps her prepare to be honored as a Time Person of the Year in 2018, Ressa asks if mentioning “hope and love” in her speech is too cheesy. She decides to go with it.

Ressa’s trials may be far from over after the decision on her case is rendered tomorrow, particularly since Rappler continues to face a barrage of other court cases. Meanwhile, the documentary at one point captures her giving a message to her downcast teammates in the newsroom: “We still think there is hope, do we not?” JB

Amal Clooney on upcoming Maria Ressa cyberlibel verdict: ‘A signal of what lies ahead’