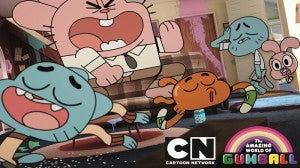 MANILA, Philippines – Cartoon Network helps kids beat the heat this summer with cool new episodes from its award-winning series, The Amazing World of Gumball. Airing every Saturday at 9:00 a.m., the new season promises laugh-out-loud fun, ranging from the unbelievable (Gumball’s dad getting his first job as a pizza delivery guy) to just plain wacky (the lamest duel in the history of love, a.k.a. Gumball versus Tobias).

Cartoon Network also invites Filipino kids and their parents to share in the fun through exciting activities with Gumball and the gang at Cartoon Network’s Gumball on Tour event this Sunday, April 29 at the SM Mall of Asia. Upon entry, guests are granted passports and can experience the wonders of travel through fun booths, awesome games and much more!

Fans can also get a chance to win the new Apple iPad and other super cool photo gear runner-up packs by joining the Gumball Pic-O-Rama contest. In simply downloading Cartoon Network’s awesome Pic-O-Rama app from the iTunes store, users can capture their favorite destinations featuring Gumball, Darwin or Tina and post their photos on the online gallery at www.CartoonNetworkAsia.com.

Discover how a typical suburban family survives, lives and enjoys life in an extraordinary town. Join twelve-year-old Gumball, a playful and funny blue cat, and see how he takes on the bombshells of his life in the all new season – every Saturday, 9:00am on Cartoon Network.

For more information on Gumball on Tour and Gumball Pic-O-Rama contest, visit http://www.cartoonnetwork.com.ph/contest/2012/04_gumball_on_tour/.