DJ Loonyo gets flak for erroneous mass testing statements, apologizes for ‘wrong use of terminology’ 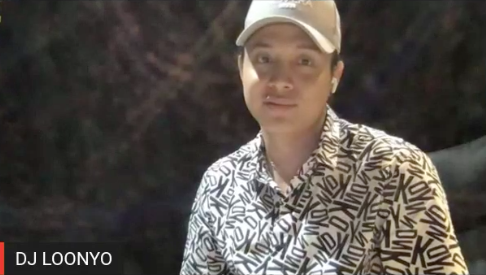 Viral dancer DJ Loonyo (real name: Rhemuel Lunio) has been receiving flak over his comments on COVID-19 mass testing, a term he admitted to having used incorrectly.

During a livestream held by local hip-hop artist Mr. Mainit-Kenjhons, Loonyo shared his stance on mass testing, which he initially claimed as a “trial and error” method of vaccination, as opposed to conducting tests to determine if people have contracted the novel coronavirus or not.

Kenjhons then told Loonyo that he is set to undergo “mass testing” the next day at a studio where he is scheduled to choreograph a dance; Loonyo replied with a disgruntled “Oh my god!”

(It’s like, is this thing going to work for you? I don’t know what they will use for the mass testing – whatever they will make you ingest or do, it’s trial and error.)

“Kaya kawawa ‘yung magi-intake, mag-a-undergo nun, kasi it’s not 100% proven. It shouldn’t be mandatory, it shouldn’t be encouraged,” he added.

He then noted that it would depend on an individual whether to believe it or not, but noted that for him, he would not like to get tested.His reason: he is a human being and his body will react to whatever he will ingest.

(What if my body reacts badly to whatever they will make me take? I’m dead. Right? That is why I do not believe in mass testing.)

“DJ Loonyo” immediately went viral on Twitter following the livestream, as netizens and celebrities alike have been calling him out for his thoughts on mass testing three months into the quarantine.

“We are where we are because of people like him. Dude, may pera ka pang-vape. So meron kang pang data (Dude, you have money for vape. So, you also have money for data),” actress Agot Isidro said on Twitter earlier today, June 3.

We are where we are because of people like him 👇🏽

Writer-director Kip Oebanda meanwhile corrected Loonyo about mass testing, saying that “mass testing doesn’t mean they are testing drugs on you. It is not a vaccine. WTF.”

“They’re testing you for the virus. You can’t die with a swab. If you don’t know what you are talking about, don’t try to influence people to do stupid things like your anti-vaxx BS,” Oebanda stressed.

DJ Loonyo… mass testing doesn't mean they are testing drugs on you. It is not a vaccine. WTF
They're testing you for the virus. You can't die with a swab. If you don't know what you are talking about, don't try to influence people to do stupid things like your anti-vaxx BS.

“Can someone educate DJ Loonyo what mass testing is? He’s spreading misinformation about it and instilling [fears] among his followers,” one Twitter user @CoachClarkie posted earlier today.

Can someone educate DJ Loonyo what mass testing is? He’s spreading misinformation about it and instilling fears among his followers.

Another Twitter user with the handle @ellex911 advised Loonyo to research first before speaking up about the issue, saying: “Seriously?? DJ Loonyo?? You literally don’t know what mass testing is.”

Seriously?? DJ Loonyo?? You literally don't know what mass testing is. You should have google it first before you speak up. pic.twitter.com/4Gh7kVyMtv

Another meanwhile lamented why people like Loonyo, who have a significant amount of social media followers, “could have so much influence” but “hold so little knowledge.”

and again why is it that most people who could have so much influence hold so little knowledge? kastress kayo https://t.co/tTsPVBS8uy

‘Wrong use of terminology’

Loonyo has since released a statement past noon today, where he apologized “for the wrong use of terminology in that particular instance.”

“I was actually referring ‘CLINICAL TRIALS’ (sic). I understand that the use of terminology is critical, so I apologize for any confusion caused,” he said.

He then encouraged both supporters and bashers to watch the whole livestream for them to understand that they were talking about pharmaceutical companies and the “business over integrity” scheme.

He then thanked the public for calling him out for his mistake and said he wishes them to have open minds as well. JB