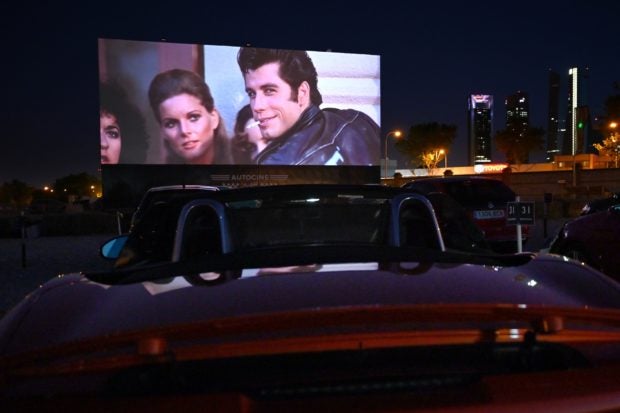 Cinema-goers in their cars attend the screening of the musical romantic comedy film “Grease”, during the reopening of the Autocine Madrid Race drive-in cinema on May 27, 2020. Image: AFP/Gabriel Bouys

For many, it was a long-awaited chance to feel normal again, sitting in their cars belting out “Summer Nights” at Madrid’s drive-in cinema on a rare night out after a 10-week lockdown.

It’s opening night at this 1950s-themed venue and as the sun sets, vehicles begin pulling into the huge car park, ushers ensuring each is carefully positioned several meters apart.

With cinemas emptied across the world because of the pandemic, drive-in screens have seen a resurgence in popularity, offering those who’ve been cooped up at home for months a safe way to go out.

Two days after the Spanish capital finally began to emerge from one of the most restrictive lockdowns in the world, the Madrid Race reopened its doors with a screening of the 1978 hit musical “Grease”.

“We are the safest entertainment place in Madrid. It seems like drive-in cinema was made for a time like this,” Madrid Race co-founder Cristina Porta told Agence France-Presse, saying tickets for the month sold out in one day.

For the venue, the epidemic and the resulting restrictions have opened a whole new business opportunity.

“We’ve already got seven concerts booked and we’re going to do theatre, masses, comedy, monologues and a bit of everything,” she told AFP.

“This summer, there’s going to be a lot more than just cinema. There will be a lot of action and a lot of rock and roll.”

As night falls, the lights come on at the chrome metal diner, the “corn truck” is churning out buckets of popcorn and beer is flowing at the bar as staff in gloves and visors serve the growing crowd as they wait for the film to start.

“It gives you a real sense of freedom. We really wanted to get out of the house,” says 22-year-old Belen Perez who has come with her flatmate after finishing teacher training school.

“We came a few years ago and we liked it so we thought it would be a safe option,” she says, her eyes smiling over her mask.

On a normal night, there would be space for 375 cars but with Madrid only just reopening after suffering the brunt of an epidemic which in Spain claimed over 27,000 lives, they have limited entries to 100.

For now, the diner is closed to the public and tables are well-spaced at the bar terrace with customers able to order food through an app, with waiters delivering it to their car within 10 minutes.

“At the end of the day, your car is an extension of your home,” says Porta.

“With these measures, it’s enough to ensure there’s zero risk of infection.”

“Everyone has their own private space, there aren’t many surfaces where you could pick up infection because during the film, no one gets out of their car and if you want to order food you can do that online,” agrees Perez.

“It’s a great way of being entertained safely.”

For many, it’s the first time they’ve been to a drive-in, watching the film through their windscreen and hearing the soundtrack through a frequency on the car radio.

“To be honest, it feels safer than most other things, even doing your daily shopping,” said 28-year-old Daniel Martin, an aeronautical engineer.

“I’m grateful to be here, even though you’re a bit enclosed. At least we’re socializing a bit even though we’re separated, and that’s something,” he told AFP.

“Although we’ve seen the film more than 10 times, seeing it like this is something new. We’ve never been to a drive-in cinema before, so we’re killing two birds with one stone!” CL