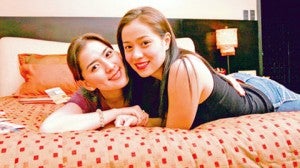 CRISTINE walks in on Ara’s home shoot for Inquirer in this file photo. They were very sweet at the time. Now they have no nice words to say to each other. PHOTO BY ERNIE U. SARMIENTO

Blood is thicker than water, so they say. But in the case of half-sisters Ara Mina and Cristine Reyes, blood is boiling and the water has dried up. It’s sad that fame and fortune has come between them.

Cristine’s nasty text messages prompted the latter to file a libel and grave coercion case. I texted Ara to check on her. Her reply: “It’s with a heavy heart that I am suing Cristine.”

It seems unimaginable how angelic-looking Cristine could use such foul language in her texts to her sister. But then again, looks can be deceiving. As sisters, isn’t Ara’s shame, Cristine’s too?

This is not the first time they have waged war against each other. Their relationship has always been strained.

Ara made her name in show biz before Cristine came around. Ara has supported Cristine since the latter’s struggling days in “Starstruck.” Perhaps even back then, Cristine was already envious of her Ate’s success and this bottled-up resentment made her threaten to reveal what she describes as Ara’s rabid sex life?

It’s too bad Cristine has let fame get into her pretty head. A young star who used to be close to her told me that she was surprised when Cristine refused to give out her new number. Apparently, more than Cristine’s number has changed because of her newfound fame.

Certainly, Ara is no saint herself, but stories about her kind-heartedness are not unheard of in show biz. For instance, she recently gave her longtime publicist a brand-new car.

Based on her text messages, Cristine has no respect at all for her Ate Ara. Neither as a sister nor as a human being. It seems the side effect of fame on Cristine is amnesia. Has she forgotten all the sacrifice that Ara has made for her all these years? I don’t think Ara’s keeping score. But it is basic human courtesy to give credit where credit is due. Even if Cristine doesn’t appreciate Ara, the least she can do is to acknowledge Ara’s role in her life especially when she was still a nobody. Is that too much to ask or too much to give, Cristine?

Maybe Cristine should remember her near-death experience when she got stranded in their house during a typhoon. That should bring her back to her senses. Or does fate need to send her a more traumatic wake-up call to make her realize that everything is fleeting, including fame?

When I saw BB Gandanghari at the birthday bash of Perci Intalan, our cool “Bossing” on TV 5, she nonchalantly told me: “Ikaw ha! I didn’t think you would write down everything we talked about. Pati about the black guy. Kawawa naman siya pag nabasa niya yun.”

I laughed it off because I didn’t mention the black guy’s name, so BB need not worry. I meant no harm. But being the free spirit that she is, I know BB gets my drift.

Kris Aquino is conspicuously missing in the fab Summer Station ID of ABS-CBN. It does not seem complete without her. According to Deo Endrinal, whom I fondly call “Classmate,” Kris had already booked her schedule during the dates allotted for the shoot. Ever so busy Krissy!

Fanatics of ABS-CBN’s “Walang Hanggan” can now  do a Daniel (Coco Martin) and Katarina (Julia Montes) number by wearing the same infinity ring that binds the lovers in the top-rating teleserye. The  eternal symbol of love a la Walang Hanggan is available at all branches of Karat World nationwide in 14-K yellow gold, 14-K white gold, and silver 925 to suit every budget. Check it out at http://www. karatworld.net/infinity/.

PERSONAL: Madamo gid na salamat to Boy So and my La Carmela de Boracay family for always pampering me more than I deserve, and also to the wonderful Ortiz family, especially Mark and Tita Cora  of San Antonio Resort in Roxas City for making me their adopted daughter!